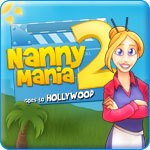 So, who’s the worst celebrity Mom, at least according to the tabloids? If you’re playing the time management game Nanny Mania 2, it’s grown-up child star and academy award winner Sophia Ashford. She’s 25, incredibly wealthy, and completely overwhelmed by raising a family. That’s where Nanny Emma comes in to save the day.

After Emma successfully helped Mayor Whitby and his family in the first Nanny Mania, she decided to head off to California, thinking she’d have a chance to relax on the sandy beaches. But, after taking a job with Sophia in Hollywood, Emma finds she has her work cut out for her. In Nanny Mania 2, you must care of the children and pets, fend off the paparazzi, and keep the house spotless. You can expect a fast-paced game with lots of clicking and lots and lots of levels, along with a bunch of marked improvements over the first Nanny Mania game.

Your primary job is to keep the house clean. Dirty items are highlighted in red. Click them to send the Nanny over to clean them up. You can click on items in advance, and the Nanny will attend to each task in the order you have clicked. As in the first game, the parents and kids go around and mess things up as you play. In a new twist, you can stop them by intercepting before the dust cloud settles.

Some tasks require multiple steps to complete, such as doing the laundry, which involves gathering up the clothes and putting them in the washing machine, then into the drier, and then finally away in one of the dresser sets. Unlike in the previous Nanny Mania, an alarm goes off when you’ve gathered all the clothes, so you won’t be surprised by any stray shirts laying around! Making dinner requires you to get items from the fridge and set them on the stove, serve the family once it’s done, and then stack the dishes in the dishwasher.

Baby care involves making bottles and changing diapers. Dirty diapers get placed in the bin. Bottles must be warmed before they are served. You need to do all this before the baby’s patience meter runs out, or else you’ll suffer a five second penalty.

Some messes grow the longer you leave them. Leaking toilets and tubs can easily create puddles all over the floor.

You earn money as you play to buy upgrades, like a faster bottle warmer, better espresso machine, faster mop, etc. You can only access them on a tight schedule, however, so they aren’t very helpful.

There are some special surprise features that keep the game interesting. For example, when the twins are born, you need to keep the windows closed before the paparazzi snap pictures.

Pets are a new twist in Nanny Mania 2. First, you start with goldfish. They don’t do much but dirty the aquarium. Close to halfway through the game, you get to care for a dog named Max. Like the kids, sometimes he makes noise, and needs to be clicked on in order to quiet down. He can also make a mess, but thankfully he doesn’t do this too often. When he whines at the door, you need to let him out. Otherwise, it’s business as usual. The pets don’t really make a big difference to the game play, and pretty much behave like extra children.

If you need a speed boost, you can click on the tea or coffee pot for a temporary boost. Because the playing areas can be wide and busy, there is an arrow which appears to tell you where messes can be found, and where the Nanny is at any given time.

For each level, you must clean up everything before the timer runs out. For experienced players, you can try to finish in expert "perfect" time, which is also shown at the top. You can replay levels again if you want a better time.

There have been several positive changes made in Nanny Mania 2, including a more consistent cartoon-like style then the first. The ability to chain tasks for a bonus (like vacuuming, mopping puddles, and throwing trash) is a nice touch, and the different houses have distinctly different layouts, making things more challenging. As always, the length is excellent, with lots of replay value.

Despite small improvements here and there, the game has the same feel as the previous Nanny Mania, so it’s not drastically different if you already own the first one. Over many hours of game play, the tasks can get repetitive. It seems like the length has been extended by simply adding a lot of this repetition, and just increasing the speed a notch. The upgrades were also a bit useless, since they are all locked until certain levels, so it might as well be automatically given. It would be nice to be able to select what you want, when you want it.

Still, Nanny Mania 2 is fun to play, with plenty of tasks and lots of frantic clicking. It’s a bit more polished than the first Nanny Mania, with a bit more room for strategy and a few new elements, even though the general gameplay remains much the same.

If you like this game, try Nanny Mania, Babysitting Mania, and Carrie the Caregiver: Preschool.