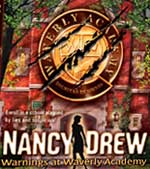 Nancy Drew is many things: super sleuth, spa worker, entomologist, spelunker… But the one thing she rarely is anymore is just a kid. However, with Nancy Drew: Warnings at Waverly Academy, Nancy’s age is finally an important part of the story.

Nancy is called to the Waverly Academy, a posh silver-spoon private girls school, to help solve the mystery of the Black Cat. Girls living in the valedictorian-candidates wing of the dorms are receiving threatening letters from someone claiming to be the Black Cat, then having some downright dangerous "accidents" happen to them (one girl, who is allergic to nuts, was sent to the hospital in anaphylactic shock). While this seems awful on its own, there is no clear way to know who is the Black Cat, as there is a lot riding on becoming valedictorian. The girl chosen will have choice of their college and a full-ride scholarship. Nancy must go deep undercover, get to know the girls, and find out who is sending these letters, and why.

Under the pseudonym "Becca," Nancy will get to know the girls of Waverly Academy both in person and through creative use of her cellphone. There is a good-sized cast of characters, and they are all interesting personalities. From the forced-smile head of the student body to the goth cellist to the shy tech nerd, each girl has her motivations to be valedictorian, as well as being the Black Cat. There is a very real social caste here, and Nancy has to "fit in" somehow to gain their trust. Gossip is flung fast and furious, often learned via text messages on your cellphone (which will help guide you to where you need to go).

In order to remain undercover, Nancy has to follow the rules of the Academy. First and foremost, "Becca" is in charge of the snack station, and must be on duty at least once per day, or risk earning demerit points. Too many demerit points, and you are booted from the academy. Other reasons to earn points include being out too late, making excessive noise or being in another girl’s room after lights-out. Time will pass in the game, and you can always keep track of the time on your cellphone. In fact, if you need to move forward in time to, say, the next day, you have to set your phone’s alarm to "wake" you before time passes. But be careful: don’t set it too early, or you’ll earn more demerit points. Doing positive things, like running the snack bar more than your minimum requirement, will earn you credits against your demerits.

Nancy also has to try to make friends along the way, and these girls don’t make it easy. As the "new kid" Nancy ends up doing a lot of errands for these girls, but they often lead to clues that push the story along, or unveil a new puzzle to solve.

As always, the heart of any Nancy Drew game is its puzzles, and Warnings at Waverly Academy doesn’t disappoint. The first question that everyone will ask is, Must I play those arcade games? The answer, at long last, is no (well, almost). The first two times you must play a game against a girl, if you lose a couple of times, the girls will take pity on you and give you what you need to proceed. While there is one point you must play a game and win to proceed, you’ll have ample opportunity to pick a game and practice. The rest of the puzzles are typical Nancy Drew fare, requiring a bit of research (which is easily-searchable in your journal) to finish. The variety of puzzles in the game is quite good, from fitting pieces of DNA together to remembering the pattern a squirrel ran to climb a tree, to building the valedictorian page of the school’s website (using pictures snapped on your cellphone), there is a lot to do here.

As always, Her Interactive did a great job with the production values of Warnings at Waverly Academy. The graphics are rich, detailed yet run well on most computers. The voice acting seems a step above the other games, which really says something. The story, without giving anything away, becomes a lot richer than the other games, and not having a sudden wrap-up (like The Creature of Kapu Cave).

If there is anything negative to be said about Warnings at Waverly Academy, it’s that the setting is a little bit drab compared to Nancy’s usual romps. To go from lush tropical islands, harsh Arctic tundra or exotic European destinations, Waverly Academy can feel a little cramped. You never really leave the dorm or its grounds. Another usual quibble, the inability to skip dialog, remains. Also, be prepared for a big download (over 1 GB) and a bit of a lengthy installation.

Overall, though, Warnings at Waverly Academy is a fine return to form for the Nancy Drew series. The previous game in the series, Ransom of the Seven Ships, was missing a certain sparkle that is back here. It’s definitely worth a trip back to high school for this game.