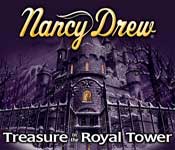 "Sometimes, you just can’t go back." That’s the general feeling when starting up Nancy Drew: Treasure in the Royal Tower. Released way back in November of 2000, it’s easy to see how developer Her Interactive learned to hone their Nancy Drew titles to both a science and art. This one is full of missteps, but only because we have over ten years and 17 games as perspective.

The story of Nancy Drew: Treasure in the Royal Tower is somewhat predictable. Woefully-unlucky Nancy is snowed in and stuck in Wickford Castle, a beautiful yet mysterious (of course) castle, complete with dead end hallways and weird guests joining her. They’re all snowed in, so Nancy might as well explore and be helpful to those around her. Of course, intrigue ensues, and there’s something about a big diamond and Nancy gets knocked unconscious at some point…

Basically, the story here is incredibly weak compared to some of the better yarns in the canon. The cast of characters is much smaller than most other games, and none of them are particularly likeable. There’s the caretaker of the castle, Dexter, a gruff old man. Then there’s Jacques, the dreamy French ski instructor, Lisa the photojournalist and Professor Hotchkiss, an eclectic shut-in who rarely leaves her room. And that’s it. It’s hard to weave a web with a cast this small and uninteresting.

What’s worse, whomever they hired to voice Jacques surely hasn’t acted much. His French accent is so atrocious as to be funny. The other parts – aside from Nancy – feel like they were phoned in, making it hard to care about the characters. From a series that is now knows for great characters and actors, this was a big surprise.

Equally surprising was the setting itself. You’ll spend a lot of time walking through hallways in the castle that have absolutely nothing to do. Going down to the basement involved a lot of clicks to go down a spiral staircase, down a long, empty hallway, around two corners and then turning to find the ski rental office. And that’s just one example. Navigation around the castle is not easy, as you’ll be running your mouse along the screen hoping the spyglass icon will change to an arrow in the direction you’d like to go.

Considering the game’s age, though, the graphics are amazing. Wickford Castle is beautifully rendered, with paintings on the wall, gorgeous masonry work and dark crawlspaces. The main lobby in particular is almost lifelike, and one of the most believable spaces in the Nancy Drew games. The sound (apart from the voice acting) is also well-done. The music always suits the situation, and the sound effects are wonderfully atmospheric.

But the heart of every Nancy Drew game is its puzzling, and sadly, Treasure in the Royal Tower falls flat. It’s not that the puzzles here are bad. It’s that there aren’t many of them, and some of them are hard to spot. Some of them are number puzzles, such as entering combinations to a locker or using an atlas to find co-ordinates. Others are mechanical in nature, like pulling chains to unlock a door. However, some puzzles are not triggered unless you’ve done something previously. One particular puzzle involving a purple rose requires you to have read a book back in the library. If you haven’t, then you’ll have to trek all the way back to read it, or the puzzle simply won’t appear. Otherwise, most of the time will be spent running around for other people, fetching things and gathering information.

One nice thing that is introduced in Treasure in the Royal Tower is the idea of a schedule. Certain people appear at certain times, or offices are open only during certain hours in the day. Using the alarm clock in Nancy’s room, you can skip to a time without having to wait around. The phone beside the alarm clock is handy so Nancy can call some friends for tips and backup.

But given the amount of progress that gaming in general has made in the last decade – even within the Nancy Drew series alone – it’s hard to recommend Treasure in the Royal Tower as anything other than a historical curiosity. It’s evident how many lessons Her Interactive has learned since then, so whether or not you want to relive Nancy’s lesser early days is up to you.