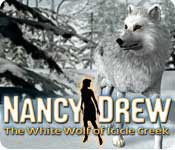 It’s very hard to describe the Nancy Drew series of games as "average." On the whole, Her Interactive releases consistent quality and writing. So if in describing Nancy Drew: The White Wolf of Icicle Creek as a "below-average" Nancy Drew title, know that it is still far better than many games out there.

The story is very familiar in the context of the series. Nancy is called to the Icicle Creek Lodge in Alberta, Canada. It is being threatened by a dangerous saboteur, who most recently caused an explosion on the grounds. Naturally, there are a number of characters who may want to wreak havok on the lodge. And if that wasn’t enough, people are reporting sightings of a white wolf nearby. Does this wolf have anything to do with the calamities facing Icicle Creek Lodge? Nancy’s job is, of course, to go undercover, meet the people there, and snoop, snoop, snoop.

In order to go undercover, Nancy must take over a number of duties at the lodge, including cleaning guests’ rooms and preparing three meals a day. This schedule is given to you when Nancy first arrives, and it is very hard to keep track. Nancy must make each meal at specific times, and ensure she makes the rounds of everyone’s room, making their beds and removing used linens each morning. The in-game clock that is running non-stop will end up getting on your nerves, as you can be far away outdoors, and not be able to fulfill your undercover tasks.

Speaking of outdoors, the game takes place in the Northern Canadian wilderness in the dead of winter. As such, the temperature outside can go from uncomfortable to downright deadly. However, to determine whether or not Nancy can explore, you must check the temperature gauge by the exit. If the temperature is mildly dangerous, a timer will tick down until Nancy catches hypothermia. If it reads very dangerous, Nancy cannot leave at all, and must go to her room, set her alarm to make time pass, and wait for another opportunity to leave. This arbitrary stumbling block can be quite frustrating.

On the positive side, as long as you’re stuck indoors, the characters you encounter are varied and believable. From Yanni, the world-class ice skater to Ollie, the gruff caretaker of the lodge, every character has a depth to them not commonly found in most games. Taking advantage of the series’ past, Tino Balducci (the shady character from Last Train to Blue Moon Canyon) can be called by phone for hints. Little touches like these help to add to the richness of the world.

And what would this world be without puzzles? White Wolf of Icicle Creek is, of course, riddled with them. While there is a nice variety of puzzling to be had here, there is a bit more of an emphasis around games which may not cater to all tastes. First off is a Minesweeper-clone involving Nancy putting up pylons on the skating rink to protect guests from thinning ice. Another involves playing a Chinese-checkers type of game against the computer that must be won three times, and you cannot skip it. There are also much simpler mini-games for Nancy’s meal-preparation duties, but again, are unskippable. However, the rest of the puzzles, including some great message-deciphering puzzles and navigating an ice floe, help keep the variety and freshness in the mix.

It almost goes without saying that the production values of White Wolf of Icicle Creek are top-notch. A familiar refrain with most Nancy Drew reviews, White Wolf of Icicle Creek features great graphics, sound and overall polish. The character dialog (though still not skippable!) is well-written and, most importantly, believable. It’s quite clear that the developers truly care about releasing something of quality.

However, unfortunately, the overall game design doesn’t quite reach the heights of better games in the series. Without spoiling anything, the story kind of wraps up suddenly and quickly, with most of the explanation happening in the epilogue. Bearing in mind that White Wolf of Icicle Creek is the sixteenth Nancy Drew game (several have come out since), the game is a decent addition to the series. But with so many other mysteries to solve, you may want to check out the other titles in the Nancy Drew canon first before venturing to the Great White North.