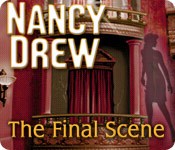 Someone really needs to buy Nancy Drew a good luck charm. Maybe it could prevent someone being kidnapped, or landing right in the middle of a mysterious haunting or some other calamity. In Nancy Drew: Final Scene well… You can guess nothing good comes of being in Nancy’s vicinity. Good thing the point-and-click adventure game around her is pretty good, though not quite up to her usual great standard.

In Nancy Drew: Final Scene – the fifth game in the series – Nancy is invited by her friend Maya to a classic movie theater that is going to be closed down and demolished after premiering a big new movie as its last hurrah. However, when Maya goes into a backstage room and is kidnapped, Nancy is up to her eyeballs in intrigue. She is ordered to stop the demolition or else she’ll never see Maya again! With suspects all around her, from the old projectionist who would lose his job to the historical activist to the big star’s agent out for publicity, it’s a real head-scratcher for poor ol’ Nancy.

The mood is set early on by the game’s great soundtrack. Nancy Drew titles are always known for being well-made, but the music here is really top notch. A weird combination of jazz/big band and suspense film, it helps set the tone beautifully. And speaking of sound, the voice acting is, again, very well done.

Unfortunately, the graphics aren’t quite up to par with the audio. While certainly not ugly by any stretch, Final Scene isn’t as slick and sophisticated as other, later games in the series. Character animations in particular are rather stiff. Granted, after some time you will adjust to them, if you’ve only been playing Nancy’s more recent exploits, it’s a bit of a shift.

However, the main point of the Nancy Drew games is to solve mysteries, right? The requisite puzzles are here, but not in the same abundance as you may be used to. The puzzles that are there are quite good (and require a notepad beside you to help keep track of clues!). It’s just that there aren’t enough of them, and they can’t be skipped. One slider-like puzzle in particular doesn’t reset when you walk away, which can lead to a bit of frustration.

Part of the frustration with other parts of the game are not necessarily full-on "cons" but rather frustrations. Since this is an older Nancy Drew title, the navigation isn’t as clean and clear as later games. Points of interest appear as a thin red outline around a magnifying glass, which isn’t always easy to see. But the hardest is the sequence of events the game forces you to do at times. For example, after searching through a suspect’s briefcase, you can’t just click away to move away from the table. You first have to close the briefcase before the game lets you leave. Other times, the area of the screen you need to click in order to advance isn’t clear or obvious, like trying to look over a railing, move through a narrow balcony or get up form under a table.

Nancy Drew: Final Scene also has more backtracking than many other games in the series. Thank goodness the theater is small and easy to get your bearings, because you’ll be travelling back and forth between suspects as you put the pieces of this mystery together.

The saddest thing, though, is the game is relatively short. It’s really a shame, too. The story in Final Scene is a very good one, with engaging characters that all have full backstories. Each suspect really could be a kidnapper, with tons of red herrings to throw you off. The theater itself has a rich history that you’ll learn about as you explore its halls and walls. There’s a lot of detail here, and you really feel like you could be walking in a historic atmosphere.

While not the greatest game in the series, Nancy Drew: Final Scene is a solid adventure for our beloved super sleuth. You really do get used to most of the annoyances, and though the story wraps up too quickly for taste, it’s a fun ride while it lasts. If you’re looking for another hit of Drew’s clues, don’t let the lights go dark on Final Scene.