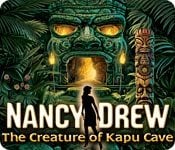 The latest Nancy Drew point-and-click adventure available for download, The Creature of Kapu Cave, is actually number 15 in the series. Like all other titles in the series, Nancy finds herself in an exotic locale and gets in too deep with a mystery, while meeting a cast of suspicious characters along the way.

In this case, Nancy travels to the Big Island of Hawaii, to work as an intern for quirky entymologist (that’s bug researcher to you and me) named Dr. Quigley. She is investigating why the pineapple crops have been failing, and thinks the research facility, the Hilihili, is behind all the trouble. Or perhaps the culprit is Kane ‘Okala, a mythological creature who has a vendetta against some of the inhabitants. Of course, nothing is as it seems, and people are all hiding more than they let on. By sheer co-incidence (or is it?) the Hardy Boys are vacationing there, too. What do they have to do with all of this?

Actually, Frank and Joe Hardy become integral to the gameplay. Using a cool cell phone feature, you can switch between Nancy and the Hardy Boys virtually any time by calling the other. Nancy explores various locations around the Island (which are opened up by finding new co-ordinates for her GPS device) while Joe and Frank stay behind at a resort called Big Island Mike’s.

The Creature of Kapu Cave shares much of the other games’ style and substance. The graphics are beautiful (even for a two-year old game), and the sound and voice acting is well above average. There are lots of little touches too, such as walking over a river and hearing the water get louder as you stand in the middle of the bridge, then quiet down as you pass.

Naturally, it wouldn’t be a Nancy Drew game without puzzles, and this one has it in spades. Some of them are fairly straightforward, while others rely on you to take serious notes on all the evidence you gather (seriously, keep a notepad beside you; you’ll thank me later). What’s very nice is that all the puzzles are relevant to what Nancy is doing, and along the way, you will actually learn a fair bit about Hawaii, which is a nice touch. Some of Nancy’s tasks include repairing a solar panel so she can power on a radio, figuring out how to get her 4×4 out of a ditch, or harvesting seeds for someone who is allergic to them.

Unfortunately, the game sometimes takes this a little too far. One particularly mind-numbing puzzle involves collecting plant samples, separating the different bits from your sample bag, weighing them, double-checking which species the seeds are, analyzing the results, then checking the sample against eight others collected… You get the idea.

Some of the challenges seem to be there just to make the game longer. For example, while playing as the Hardy Boys, they needed to go snorkelling. To rent the gear, they need 30 “Big Island Bucks” which are earned through menial tasks like making necklaces or fishing. I needed eight bucks to buy decent bait to go fishing, so I had to gather shells on the beach to make a necklace to earn enough to buy the bait to catch the fish to sell the fish to earn some bucks to… and so on. The game also seems to end too quickly (about six hours), just as the story really gets going, and is only explained in an epilogue.

However, the package as a whole is very well put-together, and is very much worth playing through. Her Interactive has a very rare thing on its hands: a long-running series that ages well, doesn’t get stale and keeps up the high level of polish. For that alone, the game is worth a look. The characters are all memorable, and the intrigue will keep you hooked for the whole game.

Nancy Drew: The Creature of Kapu Cave may not be the strongest title in the series, but is head-and-shoulders above a lot that’s out there, and worth the download.