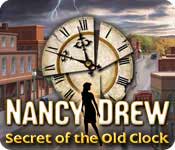 Turn your clocks back – way back – to the year 1930, when a young Nancy Drew sets out on her first mystery. Nancy Drew: Secret of the Old Clock is an interactive version of the first ever Nancy Drew novel, which celebrates its 75th anniversary this year. But it should be pointed out this downloadable point-and-click adventure game actually debuted more than two years ago – on CD-ROM – as part of Her Interactive’s popular Nancy Drew computer game series. Now that many web surfers have a broadband connection, it might be just as easy to download this 500MB+ game directly to your PC.

This single-player quest begins as the teenage sleuth is invited to visit her friend, 17 year-old Emily Crandall, who is mourning the loss of her recently-deceased mother. Emily is also trying to keep the Lilac Inn afloat, but the money promised to her by a late neighbor and inventor, Josiah Crowley, was instead willed to shady ESP teacher Richard Topham instead. Hmm. After Nancy hears about these events from Emily, and witnesses the theft of a box of jewelry and other odd happenings (such as a suspicious fire in the kitchen), the junior detective decides to stay in Titusville, sniff out clues, collects items and interrogate characters to get to the bottom of these connected mysteries.

Similar to the old Myst-style adventure games, players move around Titusville from a first-person perspective, clicking the arrow in the direction they want to move to. At times, a puzzle must be solved on the spot (such as a sliding tile challenge) while at other times you’ll read newspaper clippings or written memos for clues, or you might click on an item to pick it up for your inventory, such as a key, photograph or book. As you’d expect by the game’s name, clocks also play a part of this game, but I don’t want to ruin it for potential players.

While engaging in conversation with characters – such as the distraught Emily Crandall, Emily’s legal guardian Jane Willoughby, the desperate businessman Jim Archer or paranormal expert Richard Topham – players choose the desired response or question from two or three options using the mouse, but they usually lead to the same response. I tried clicking on the “wrong” answer a few times but either the character told me what I wanted to know anyway or I had to come back and probe for more info.

At times, Nancy can also drive her blue sports car around town (you get a map to figure out where you’re going), deliver telegrams to raise money or engage in mini-games like fishing or mini-golf.

While a couple of years old, the game’s visuals are attractive, with convincing facial expressions and lip-syncing – and the developers did a great job paying homage to the time period, with ’30s-esque phones, cars, phonographs and clothing styles. Every so often a pre-rendered animated sequence plays out to tell more of the story. While a little cheesy at times, the dialogue is also well-done, as is the music soundtrack.

Here’s the deal with Nancy Drew: Secret of the Old Clock: it’s not the most memorable of the dozen or so Nancy Drew mysteries (personally I really enjoyed Nancy Drew: Secret of the Scarlet Hand and Nancy Drew: Legend of Crystal Skull), nor is this adventure a particularly long one, but the clever story, good puzzles and interesting characters should satiate younger adventure gamers looking for a fun digital diversion to sink their mouse into over the holiday season.