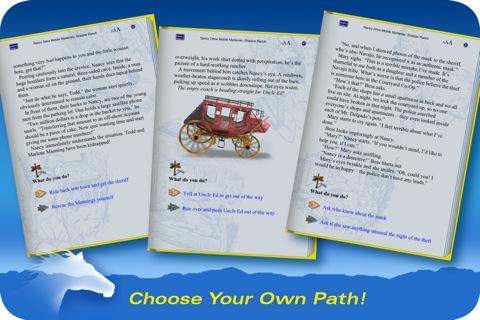 Nancy Drew Mobile Mysteries: Shadow Ranch is a great read, but not much of a game

For the last 13 years, Nancy Drew has been a staple of casual gaming goodness. The girl detective has re-visited countless previous adventures in a point-and-click digital makeover, making for some seriously satisfying adventure gameplay along the way. Now the little mystery solver has made her way to iOS devices, but with mixed results.

Like last year’s similarly titled PC release, Nancy Drew Mobile Mysteries: Shadow Ranch tells the story of Nancy’s visit to an Arizona ranch where the owners are being chased off their property, the treasure of outlaw Dirk Valentine might be hiding, and the ghost of a horse appears at night. All in all, it’s the perfect setting for a Nancy Drew mystery.

Gamebooks unfold like an actual novel. There’s tons of reading involved (alright – there’s pretty much only reading involved), and at certain junctures players will be presented with a choice. Will Nancy choose to unpack or investigate the barn? Watch for bats at the cave or go looking for scorpions? Have a ham sandwich on whole wheat or rye? Depending on the choice you make, the story will unfold in a different direction. Or at least, it should.

Unlike most gamebooks, Shadow Ranch provides a little too much structure. Offering up 8 chapters, the story has little room to meander, since you’ll always need to finish a chapter in the same place so that the next one can start off as expected. This means that – while different decisions will lead you to different pages to read – things always manage to quickly tie back in to an unbranching narrative.

What’s worse, none of the decisions you make in these chapters feel terribly important. Only once in our play time did a bad choice ever lead to a story-ending scenario – and even then we were quickly taken back a few pages and given the chance to make the right decision without any form of penalty.

This lack of challenge runs completely counter to what a gamebook is meant to offer. Whether we’re talking about the Choose Your Own Adventure stories of yesteryear or the Gamebook Adventures of today, what makes these stories so appealing is knowing that a story-ending decision hides around every corner. Without that risk, Nancy Drew Mobile Mysteries: Shadow Ranch is less a game and more an interactive novel.

The game tries to counter this fact by introducing mini-games and other interactive elements, but these all end up feeling like tacked-on window dressing and that don’t really add much to the overall experience. For example, players will be able to tap on highlighted words to see their definition, hear a related noise, or unlock a hidden item. Tapping on the word “creak” to hear a creaking sound is kind of cool, but again, it’s the sort of thing that’s cool for an interactive book – not a game. 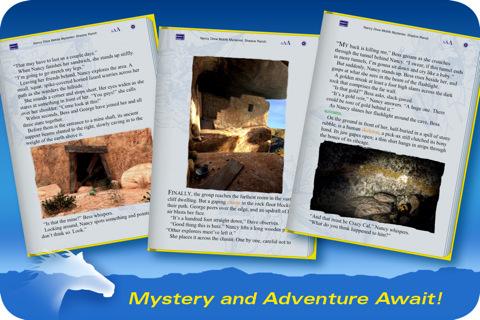 The mini-games themselves are fine, though nothing spectacular. The vast majority of these are hidden object scenes that have you finding 10 identical items like mice, eggs or horseshoes, and it’s not uncommon to see the same backgrounds used for more than one scene. It’s all fine, but again, nothing ground-breaking. These elements feel less like they belong and more like they were wedged in there to justify calling this a game.

Before you go writing this review off as the ramblings of an illiterate fool, know this: I love playable fiction. Gamebook Adventures: An Assassin in Orlandes was one of the best times I’ve had reviewing a game all year. I also love interactive books. The iPad in particular is great for these. Whether we’re talking about Alice for the iPad or Gameloft’s War in the Pacific, electronic devices like this can really take your interactive reading experience to a whole new level. The problem with Nancy Drew Mobile Mysteries: Shadow Ranch is that it doesn’t know which it wants to be – an interactive book or a game – and as a result doesn’t manage to be a stand out release in either field.

Despite this, Shadow Ranch still manages to do one thing exceptionally well: tell a great story. Nancy Drew books have been a staple of young adult fiction for 80 years now, and have been the inspiration for a wide range of successful women, from Hilary Clinton to Sandra Day O’Connor. The same great storytelling that inspired those ladies is alive and well in this app. Whether you’re a fan of Nancy Drew already or simply want to curl up with a good mystery, you’re going to be more than satisfied with the tale that’s told in Nancy Drew Mobile Mysteries: Shadow Ranch – just don’t expect to be too impressed by what it has to offer in the gameplay department.