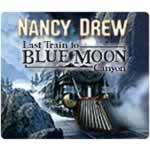 Originally released in retail stores on a CD-ROM, Last Train to Blue Mountain Canyon is now available as a download online.

It takes over an hour to download and install the hefty 700MB file, but if you can muster up the patience you’ll be treated to an intriguing interactive mystery with the depth and production values of a full-fledged adventure game in the tradition of Broken Sword, Sam & Max and Sierra’s King’s Quest series.

You step into the shoes of teenaged sleuth Nancy Drew to solve the mystery surrounding a luxurious train that once belonged to mining entrepreneur Jake Hurley in the 1870’s. Jake reportedly struck it rich during the mining boom, but then vanished mysteriously without ever revealing the location of his mine to anyone. What’s more, in 1903 his train was found abandoned at Blue Moon Canyon with its engineer dead inside.

Nancy is one of a handful of guests who has been invited on board the train by its current owner, socialite Lori Girard, to help get to the bottom of the train’s mysterious past and discover the location of Jake Hurley’s riches. According to Lori, everything needed to find Jake’s lost mine is on the train… and that’s not all. It’s also said to be haunted by the spirit of Jake’s late wife, Camille.

The game is viewed through Nancy’s eyes in first-person perspective, and uses the classic adventure game point-and-click interface to move around and interact with the environment. Nancy must investigate every nook and cranny of the antique train to learn its secrets, collect and use items in the right places, and chat with the train’s other guests to gather information.

Last Train to Blue Mountain isn’t really a “quick-fix” game like your average match-three or breaking-bricks title that are designed for short bursts of play. Some of the puzzles are quite subtle and involved, and in spite of the in-game notebook that records clues and game progress, I still ended up with pages of hand-scrawled notes to keep track of all the random nuggets of information I had come across.

That said, the game is still very much accessible to casual gamers aged 10 and over. The emphasis is on exploring and narrative as opposed to action. There’s no combat, turn-based or otherwise, and there are only one or two mild reflex-based challenges. The game can be enjoyed in either “Junior Detective” or “Senior Detective” levels of difficulty, and the easier mode offers hints and a checklist of tasks that keeps the player pointed in the right direction.

The game can be saved at any time, and there’s also a Second Chance feature that lets you restart at the point right before you did something to trigger a catastrophe – although this doesn’t happen that often in the game, it’s a nice feature to include nonetheless.

Graphics and sound are also consistent with something you’d expect to find on a retail store shelf (in other words, very good). All of the characters Nancy speaks to in the game, as well as Nancy herself, are voiced by real voice actors, so conversations take on a wonderfully human quality.

In terms of beefs, there aren’t many. Nancy’s cell phone, which she can use call her friends for tips and take pictures with its built-in camera, is a cool feature that was perhaps underused. It’s a shame that there weren’t more people to call, and that more opportunities to use the camera weren’t worked into the storyline.

Although Last Train to Blue Mountain isn’t one of those noncommittal casual games that are good for killing time, the game’s rich narrative and mind-bending puzzles offer their own unique rewards.