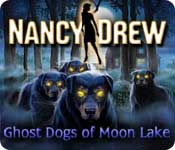 The seventh release in Her Interactive’s popular first-person mystery series, Nancy Drew: Ghost Dogs of Moon Lake sends the independent-minded sleuth on yet another adventure, one in response to a friend’s frantic note regarding a mysterious pack of pups. Supernatural events or a Scooby-Doo-like ploy? That haunting truth is for Nancy, and you, to unravel.

In the guise of young Ms. Drew, your task is to solve a mystery encompassing a sinister prohibition-era gangster, Mike Malone, and his long-deceased doggies. Legend tells that the ethereal canines are back to protect their master’s secrets, hidden in his former residence on the shores of Moon Lake. Whether the folklore is true or if a flesh-and-blood explanation exists to the dogs’ glowing eyes and mournful howls is up to your sleuthing skills to determine.

Ghost Dogs of Moon Lake begins with your arrival at the cabin of the infamous hooligan, recently purchased by Nancy’s friend Sally McDonald. Only thing, Sally is nowhere to be found. Apparently, the demonic doggies scared her off and it’s your task to find out what’s going on so she can return to her new diggs. Good luck!

As with other Nance Drew titles in this series, play is divided somewhat equally among activities like deciphering a mix of simple and cryptic puzzles (most are inventory-based and involve acquiring, using or delivering objects), investigating an eerie woods, rummaging through creepy, creaky old buildings, interviewing a collection of suspicious characters, dodging dangers hidden and apparent, and calling friends for clues.

It’s also about managing your inventory of accumulated objects, knowing when and how to use (or reuse) each item, as well as keeping track of conversations regarding information or items needed and who has them. Fortunately, if you forget anything, you can review tête-à-têtes via a provided PDA.

All action takes place from a first-person perspective, from manipulating objects to conversing with the locals (traversing the lake utilizes a top down map). Actions are accomplished in traditional point-and-click fashion, such as employing one inventory object on another and interacting with the environment. For instance, use a key to open a lock, put a cassette in a tape deck to play it or use a camera to photograph an object. Of course, not all actions in Ghost Dogs are quite so clear-cut. And, while it’s possible to die in the game (falls, fires and detonation), a “Second Chance” option and “save anywhere” feature negates any real loss.

Time is also an element of play. Some events take place only at night or during daylight. Need to head out for a nighttime prowl or pick up supplies at the Emporium? Sleeping allows you to set an alarm and wake up in either the AM or PM as needed. Most events occur during the day, but several require after-hours exploration.

Visually, Ghost Dogs of Moon Lake is average fare, not surprising since it was originally released back in 2002 and just re-released as a digital download. Graphics are competent, but don’t match those of newly-minted adventures like Dream Chronicles. Audio is another story, adding immensely to the game’s spooky atmosphere. Also worthy of mention are an intriguing story, varied and engaging puzzles, and dual difficulty settings, Junior and Senior Detective.

Ghost Dogs, however, does have several ticks and fleas. Inventory items have no description. Most are easily identified, but a few aren’t immediately recognizable. Dialogue drones on every so often with no way speed it up or opt out. Choosing different dialogue paths seems to have no affect on the game either. And, gameplay is mostly linear with one event triggering another (which results in a lot of backtracking). It also seems a bit lite having just three “suspects” to interact with and limited locations to explore. Plus, the download is quite sizable at close to 491MB. Still, with broadband it’s not s deal breaker. Having to buy the game before playing it, though, may be. Due to its size, no demo is available.

Nonetheless, Nancy Drew: Ghost Dogs of Moon Lake is fun and challenging. While younger gamers may find some of the puzzles a bit difficult, and the ghost dogs a touch scary, fans of Nancy Drew mysteries should enjoy the game immensely. Just be prepared for a long download before you begin sleuthing around Moon Lake.