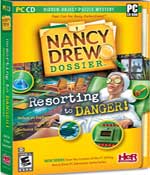 The first Nancy Drew Dossier game, Lights, Camera, Curses! was a great success. It managed to combine fun, accessible hidden object gameplay with logic puzzles, some arcade mini-games and the usual high-quality Nancy Drew production values and story into one great product. After many months of waiting, the second title of the series, Resorting to Danger! manages to repeat the same great formula while improving upon the few nagging issues with the first.

In Resorting to Danger!, Nancy is hired by a swanky spa resort manager, who is trying to find out who is detonating troublesome, goo-filled bombs. While nobody’s life is in jeopardy, the upper-crust guests are mortified, and the spa would go out of business if the bomber isn’t stopped.

Of course, there are a number of people who are working at the resort, and each has their own reasons for wanting to sabotage the business. From the creepy janitor to the biochemist desperate to get recognition for his work to the rude dilettante film star, there are enough twists to keep you guessing. This motley crew of characters is one of the best yet in any Nancy Drew game.

Like the first game, the goal is to complete each scene by finding object, and pairing them with other objects in the scene. It’s not an impossible task, as the number of objects to be found is listed, and a sparkle and sound appear when your magnifying glass cursor pass over an important clue.

Working with found objects is a logic puzzle in itself. For example, suppose you have some tape, a phone, a torn up business card and a computer needing a password. The computer says that the password is stored on a cellphone, but Nancy can’t find it. So, she tapes up the business card to reveal a cellphone number, dials the number on the card to make the cellphone ring, finds it, and gets the password to log into the computer. Other times, it’s like following a recipe, just going through steps in a proper order.

The steps are never guesswork, as there are always clues you can easily refer to in order to progress. The diary, which was often vague in the first game, is a great resource the second time around. Clues are easy to reference, and plot points are also clearly written out. The goal of what you’re trying to do is written out for you, and can be elaborated on by clicking on it. You’ll also get a ton of hints as you play, so don’t worry if an object isn’t apparently visible. I ended up finishing the game with about 50 of them.

Another big improvement is the user interface at the bottom. In the first game, the actions were sometimes are to figure out (i.e. should you be pulling, flipping or looking at an object?). Here, if you need to look at something, the game automatically makes a little eye icon, taking the guesswork out. The other actions – such as push, pull or lift – vary form scene to scene, and are very clear.

Minigames make a return, too, and are more fun and varied than before. From a great tile-swapping game to a Hexic or Bejeweled Twist-style rotating match-three game to a surprisingly-fun facial series, Nancy Drew will have her hands full with lots to do. Only one minigame is timed (a bomb-diffusing minigame where you have to finish building a connecting line between two points), and you can replay it until you finish without penalty. None of the mini-games can be skipped, though, which may bother some players.

Conversations are back, and once again, Nancy has to listen carefully to what’s being said and pick the appropriate response. In between scenes, you’ll also have to figure out where to go – which isn’t that tough. You’ll need to have your wits in order to get the best score.

Again, if you want the best ending, you’ll need to achieve the highest ranking by earning a great score. The better you perform in minigames and making successful successive matches, the higher the score. Her Interactive says there are six different endings, so you’ll need to be a super-sleuth to see them all, adding to the replay value.

Resorting to Danger! uses the same pencil-drawn look as the first title, and once again, it looks great. The soundtrack is well-written, and like usual, the voice acting is top notch. The characters are more believable than ever. Tipping the hat to players of the first game, there are a number of references to the movie Pharaoh, and a few of the cast members.

In fact, if Resorting to Danger! has any flaws, they reside in one big puzzle right at the end, which made obscure references to Greek mythology and people. I scoured my diary to no avail, and had to Google information about the people that I needed to match with objects. Perhaps I missed something, but it was a problem that needed some outside detective work in order to successfully finish the game.

Other than one difficult puzzle, Resorting to Danger! keeps all the great features of the first title and builds on a great formula. Do no hesitate to take a trip to the spa with Nancy, but be sure to watch your back!