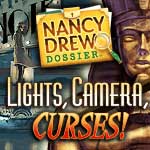 Her Interactive’s Nancy Drew series is known for having games that are well-made, well-written and well-acted, and contain some good head-scratching puzzles. After 19 games, the developer is taking Nancy Drew to another exotic locale: the hidden object genre.

The first game in the new Nancy Drew Dosser series, and the first game designed specifically with the PC download market in mind, Lights, Camera Curses! diverts significantly from its point-and-click roots, but keeps enough in common with the first series to make it feel both fresh and familiar.

As the name implies, Lights, Camera, Curses! has our teen sleuth off to a Hollywood movie studio that is remaking a classic movie, Pharaoh. It seems there have been a few “accidents” and it’s up to Nancy to unravel the mystery behind them. Of course, there are a number of charismatic suspects, each with their own motives, and nothing is as it seems.

The heart of Lights, Camera, Curses! is scouring scenes for clues. As you move Nancy’s magnifying glass over each scene, a sparkle accompanied by a sound indicates something of importance. A description and close-up image of the object you just found will pop up. After finding an object, it remains highlighted with a magnifying glass, waiting to be used to move forward. This works in a number of ways. For instance, a torn poster needs to be repaired. Clicking the poster highlights it, and once you find something that might work with it – tape, perhaps – you click on the poster and the tape to make a match, repairing the poster and finding an important clue.

Important evidence that contains relevant details to the case is kept in your Diary. Clues are organized chronologically, which sometimes makes them hard to track down in a pinch. Nonetheless, it’s nice to not have to keep a thick notepad beside you while playing the game. You can refer to evidence any time you need it, which is very handy.

Sometimes, there will be puzzles that pop up that are unique to the situation. From decrypting hieroglyphics on a movie poster to making smoothies (so you can listen to some juicy Tinseltown gossip, and hopefully learn a thing or two about the Pharaoh’s curse!), Nancy will definitely have her hands full.

Another important addition for the Dossier series is the action bar. Here you’ll be able to perform actions when the bar is lit up in blue, such as investigating an object further (say, to look inside a grate), physically interacting with an object, turning on Nancy’s flashlight to look in dark places, picking locks or decrypting computer data.

The last two actions in particular open up another fun addition: mini-games. When Nancy picks a lock, a Tetris-style minigame begins where you have to drop tumblers of different colors to match a picture the game shows you. Decrypting computer data is another dropping game, filling in gaps of data using data blocks to create full columns as they get scanned by your decoder. There are other mini-games too, but are a touch spoiler-filled to be discussed here. Suffice it to say, they are all fun, and can be replayed from the title screen under the Arcade menu.

The last major difference in Lights, Camera, Curses! is the new conversation window. Rather than simply digging for information, Nancy has to reply in a way that makes sense. Sometimes you’ll have to respond about something you found, or an action you recently performed. Make an incorrect choice, and the other person will not know what you’re talking about.

Unlike previous Nancy Drew games, Lights, Camera, Curses! uses a points system to chart your progress. Points are earned by chaining correct matches, answering correctly during conversation and in the different mini-games. Earn enough points and you unlock a special ending that only the best super sleuth will get to see.

Even though it seems like a radical departure from the original series, the Dossier series shares all the best aspects of the original. The graphics – which have a more hand-drawn style to them than the photo-realistic 3D of the originals – are beautifully crafted. The music is very film-noir/Egyptian to match the film being shot in the game. Lani Minella reprises her role as the voice of Nancy Drew, and as always, brings a nice earnest energy to the part. In spite of the sheer number of releases, Her Interactive is able to maintain a great level of quality to these games.

There are only a couple of minor complaints. First, the action bar commands can be ambiguous at times. When I clicked on a box, the game told me something was of interest inside. Naturally, I thought I should open the box to see inside, but the game wanted me to look rather than interact, breaking my chain of correct matches. Also, later in the game, there are a couple of timed match events – one of which is repeated – that feel a little like unnecessary padding and challenge.

Lights, Camera, Curses! doesn’t break much new ground in the hidden object category, but what it does, it does spectacularly well. Her Interactive has a great new series on its hands, and if they can continue the quality in future Dossier titles, then Nancy Drew has a very bright private eye career ahead of her.