This Naked Gun fires nothing but blanks

Naked Gun: I.C.U.P. is a crushing disappointment. As a long-time Police Squad fan, I was really looking forward to this videogame reincarnation of the classic comedy franchise. But the gameplay is dull and uninspired, it’s plagued with bugs and worst of all, it’s just not funny.

If being killed by left-wing insurgents from Paraguay strikes you as an inherently funny idea, then you’re either a fan of Police Squad, the very-short-lived 1982 television series, and its far more successful cinematic successors, the Naked Gun films, or you should be. They starred Leslie Nielsen as Sergeant Frank Drebin, a bumbling, clueless Detective Lieutenant who had a habit of getting his man and saving the day in spite of himself. It combined slapstick comedy, rapid-fire dialog, bizarre visual humor and a healthy dose of straight-up insanity to create one of the most brilliantly funny shows ever to hit television.

Alas, Naked Gun: I.C.U.P. brings none of that genius to the table. It follows the adventures of Sergeant Frank Drebin Jr., son of the original character and member of the I.C.U.P. – I never did figure out what that stands for – as he solves cases and right wrongs across the city. Joining him from the movie are Captain Hocken and Detective Nordberg, who are either magically ageless or, like Drebin, “junior” versions of the originals, plus new characters including a female detective, a robot, a car wash snitch and other “colorful” denizens.

To be fair, the Naked Gun formula is probably a tough translation to videogames, but I.C.U.P. isn’t even able to come across with a few conventional, smile-worthy zingers or punchlines. It hardly even tries; a few characters toss around occasional insults about Drebin’s manhood or competence, but they’re about as witty as kindergarten recess. The visual elements that formed such a vital part of the source material’s humor, like the phone tap or the Japanese garden, appear to be non-existent as well. In one case, in which you have to shoot four birds – and yes, that’s the sort of “case” you’ll undertake in this game – Drebin says, “This is for the pigs” before killing the first one. That’s what this game passes off as funny, and it falls completely flat.

The gameplay is just as bad, and possibly worse. I was expecting a fairly conventional point-and-click adventure, but what I got instead was a vaguely Facebook-like experience in which you’ll collect money by tapping on various items in order to buy furniture and decor items for Frank’s apartment. You can also use it to pay for more practical things, like clues – and of course, if you don’t have enough in-game currency, you can always buy more with your credit card. Other collectibles include tin cans, donuts, paperwork and cockroaches, although they actually get squashed rather than collected. It’s vaguely similar to hidden object gameplay, except stuff isn’t actually hidden, it’s just sometimes hard to see because it’s so tiny. 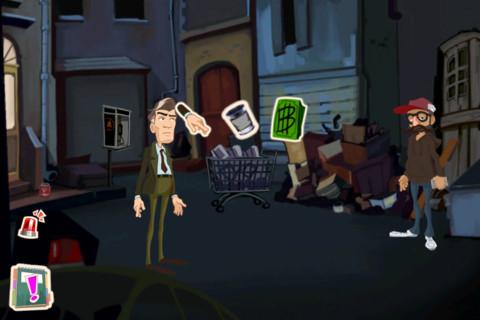 Speaking of tiny, so are the controls. Mobile screens are small, that’s just a fact of life, but the controls in I.C.U.P. are particularly undersized and the icons are can be tricky to hit with any kind of accuracy. There are also significant pauses before character interactions begin, and the game takes a ridiculously long time to start – when it starts at all.

That’s the signal that we’re about to segue into the next complaint: bugs. I.C.U.P. is a mess. “Force close” errors are distressingly common, and it also has an unfortunate habit of simply exiting to the home screen without warning or apparent reason, like a crash minus the error message. A non-fatal but still annoying bug that pops up with regularity causes the on-screen dialog to flash past very quickly, as if the screen was being rapidly tapped to skip through it.

Also frustrating, although not a bug, is that pressing the “back” button on an Android phone results in an immediate exit from the game, without any kind of “are you sure?” warning. Several times, an inattentive attempt to close the game’s notebook left me staring at my home screen, a design oversight made doubly annoying by the aforementioned long startup time. And although the game is played in landscape mode, Frank’s notebook displays only in portrait, which means you’ll have to turn either your phone or your head whenever you need to consult it.

I.C.U.P.’s sharp, cartoonishly exaggerated visual style looks good, but that’s not nearly enough to save it. Without the bugs, this would be at the low-end of franchise cash-in mediocrity; with them, it’s just plain bad. If you want a good comedy cop experience, take my advice and play Hector instead, or go out and buy a copy of the Police Squad DVD and settle in for three hours of absolute lunacy. Unlike Naked Gun: I.C.U.P., they won’t disappoint you.