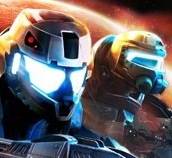 N.O.V.A. Elite is the first great FPS game on Facebook

Slowly but surely developers are starting to test the Facebook waters with so-called hardcore games. And it doesn’t get much more hardcore than a multiplayer only first person shooter. N.O.V.A. Elite is a spin-off of Gameloft’s popular iOS, sci-fi shooter series, and it works surprisingly well as a Facebook game.

There’s no story or single player mode in the game: Elite is all about multiplayer combat. So each round is simply a contest to see who can rack up the most kills in a limited amount of time. And you can do that either solo or as part of a team. Either way though, the experience is essentially the same. You’ll battle your way across a variety of different environments—ranging from a dark, moody space ship to the interior of some sort of alien meeting hall—with the goal of taking down as many opposing players as possible before times runs out.

The levels are surprisingly large and varied, with many featuring both indoor and outdoor spaces, as well as plenty of spots to take cover or plan a sneak attack. The controls are pretty standard for a mouse and keyboard FPS, letting you use the keyboard to control movement and most actions, while the mouse handles aiming and firing. It works well, though genre veterans might find the set-up a little too simplistic.

As you play matches and rack up kills you’ll gain experience and gold, which both go towards unlocking additional content like new weapons and armor. Surprisingly, Elite doesn’t use the all-too-common energy system to limit your play, so you can play as much as you want in any given session. But what the game does do is heavily monetize the gear you can purchase. While some of the weapons, armor, and other upgrades can be purchased with the cash you earn while playing, much of the gear—including the majority of the really cool stuff—requires Facebook credits.

While Elite may be somewhat generic and standard by traditional FPS standards, what’s impressive is that it works at all. And that it looks so good doing it. The game is in full 3D, and there’s a lot of variety to the environments you’ll be exploring. One round you’re in a lush, beautifully rendered jungle, and the next your traipsing through the snow hiding out in abandoned buildings. The armor designs are especially great, and make it very tempting to drop a few credits on a cool looking new helmet.

But while everything runs smoothly for the most part, there are times when the action in Elite gets choppy and slows down considerably. These moments generally don’t last very long but they can be very frustrating since even a few seconds in a game like this can mean the difference between life and death. There’s nothing worse than having the game freeze for a moment only to find out a few seconds later that someone shot you.

Aside from that though, Elite is an incredibly impressive feat. Not only is it an FPS that actually works well on Facebook, but it’s also very fun. The rounds are short enough that you can play for just a few minutes at a time, but they also make it all too tempting to play just one more. And then another. It may not be the most robust FPS ever, but it”s free, fast-paced, and fun, which make it a perfect fit for the genre on Facebook.