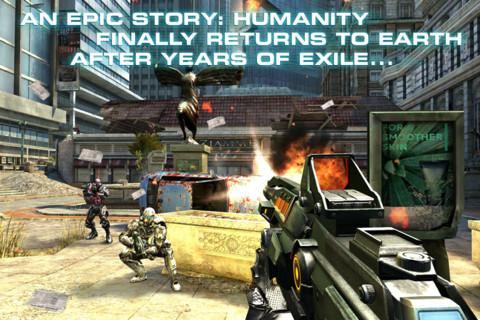 Blurring the line between iOS and consoles even further

As the iOS platform continues to get more and more graphically advanced (especially with the advent of the third-generation iPad), gamers continue to speculate whether or not it will one day be able to provide the same big-budget gameplay found only in console titles. While the debate is likely to rage on for the next few years, Gameloft’s N.O.V.A 3 is by far the strongest testament for a console-quality app to date.

Gameloft isn’t exactly known for its creativity. Most of the time, when you hear that Gameloft has made a console-like title for iOS, it means that they’ve pushed out a watered-down copy of an original concept. Modern Combat 3 is a worse Call of Duty: Modern Warfare, Eternal Legacy is a worse Final Fantasy, and yes, N.O.V.A has been a worse version of Microsoft’s Halo franchise. They aren’t bad games, but they’re rip-offs.

N.O.V.A 3, on the other hand, is a game that doesn’t feel like a blatant rip from another franchise. Yes, it’s still a sci-fi FPS like Halo, still has a masked protagonist like Halo, and still has a female computer companion like Halo, but that’s where the similarities end. Hopefully Gameloft will take this approach more often for future titles, making them feel more like an adaptation than a cheap copy.

You play under the helmet of Kal Wardin, ex-officer of the Near Orbital Vanguard Alliance, a military force aimed to protect the outer residents of the now-uninhabited Earth. When humanity steals an alien artifact in an attempt to restore Earth to its former glory, it’s up to Kal to clean up the intergalactic mess that ensues.

As a first-person shooter, the biggest question hangs: can a touch screen ever aim as fluently as a joystick or mouse? The answer: no. A touchscreen alone cannot. I started my game with the traditional scheme of using my left hand to walk and my right hand to aim/fire, and ended up disappointed as usual. Aside from needing to extend my fingers like a freak in order to make it all work, it just isn’t very responsive.

That’s when, out of desperation, I found the mode that changed my perception on mobile FPS titles forever: gyroscope. In this mode, you tilt the device freely in order to aim instead of using a virtual thumbstick. While the setting takes time to get used to and isn’t completely perfect (you still have to flick the right side of the screen with your thumb in order to turn reasonably), it’s the best I’ve ever been able to control a shooter on iOS.

Within minutes, I was picking off enemies one by one with dead-on accuracy. I even turned off the aim assist in order to increase the amount of headshots I got. In multiplayer I found myself mowing down waves of people who couldn’t hit the broadside of a barn. I don’t know why Gameloft doesn’t preach its gyroscope mode more openly, but in my opinion, it’s the most precise and engrossing way to control a mobile shooter.

It goes without saying that N.O.V.A 3 is hands down the best-looking iOS title to date. Character models and weapons look amazing, complete with realistic metal reflections. Environments obviously aren’t quite as detailed, but remain impressive nonetheless. From the ancient skyscrapers of the abandoned San Francisco to the molten climate of Volteron, it’s a beautiful world to look at.

Just like any game, however (console titles included), there are a few lazy textures here and there if you’re looking for them, such as a bus I found in San Fransisco that was simply mirrored on both sides (it had two stop signs).

But beyond simply looking good, N.O.V.A 3 feels good. Cutscenes blend into in-game action sequences extremely well, especially in moments where adrenaline slows time to a halt. Voice acting is surprisingly engrossing, and it’s employed in a way where I actually began to care about some of the characters. 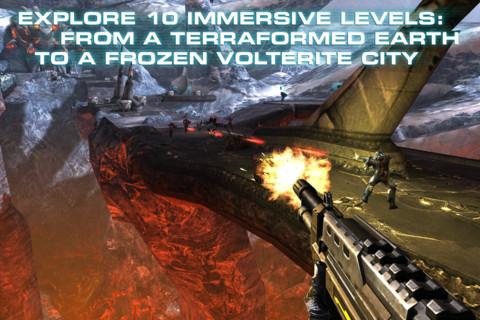 From the alien Maz’Rah’s inability to comprehend Earth humor to Rufus’ reminiscing of his mercenary glory days, dialogue feels much less forced than in previous titles. Even the stoic Kal himself is given some much-needed characterization. We’re not talking Shakespearian-level depth or anything, but for a series that feeds on action and explosions, a little personality goes a long way.

Aside from the extensive campaign, which will run you several hours, N.O.V.A 3‘s multiplayer offers an unlimited amount of entertainment. Offered over both local and online, matches span six different modes and host up to 12 players at a time. Gunning down the rest of the world in the palm of your hand has never looked or played so good.

It might be frustrating that you have to earn experience by playing in order to unlock the best weapons, but it’s a system that works both ways. Yes, it sucks having to eat rockets and lightning while using your lowly assault rifle, but it also makes climbing the experience ladder so much more satisfying.

If you’re looking for a FPS that’s exciting, immersive, and downright gorgeous in Retina display, N.O.V.A 3 is the one. It’s definitely going to lag on older iPads and iPhones with its ambitious rendering engine, but on the newest devices, it’s amazing how smooth it runs. The console-quality handheld debate is likely to continue for a while, but N.O.V.A 3 is the first title I’ve seen that pushes the quality of a handheld release this far.