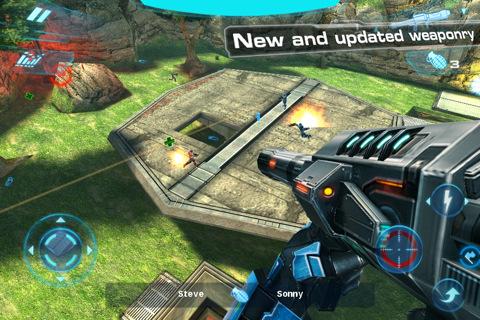 N.O.V.A. 2 continues Gameloft’s tradition of exceptional FPS’s on the iPhone

A moment of silence for the Volterites. They never had a chance, you see. Well, they did, for a little while, when they were busy stomping all humanity into the ground as the two groups warred across the stars. But then a distress call went out and Kal Wardin, mankind’s one-person army, decided to answer it. The resulting one-man war was frantic, bloody, and a pretty ugly series of defeats for the aliens. Oh, and it also served as the story for N.O.V.A. 2, a delightful new FPS from Gameloft.

The game’s story continues the threadbare plot established in the first N.O.V.A., although it picks up about six years after the previous game and has a bit more narrative this time around. This time, the intro movie showcases Kal Wardin in the midst of a particularly hectic firefight in the cargo bay of a space ship. After shooting things up for a while, the intrepid hero manages to blow his Volterite opponents out an airlock (though he travels out with them) and proceeds to literally swan dive through the atmosphere onto the planet below. Wardin’s jet-boots malfunction, which cause a crash landing near a weapons factory that’s due to be destroyed.

It’s at this point that players gain control of Wardin to begin the title’s sizable campaign, and anyone who played the first game is going to feel right at home as soon as the action actually starts. One of Gameloft’s biggest strengths is that it knows how to incorporate solid control systems in its titles, and it doesn’t disappoint here. The virtual thumbstick, the firing button, the solid camera controls, and the weapon selection system are all there. This time, however, the developers incorporated gyroscopic sensitivity for compatible devices; these controls are well-made, but their effectiveness depends on the player.

There’s still a little room for improvement, though. Many FPS games on PCs or consoles feature commands for crouching and quick evades. Unfortunately, Gameloft has yet to incorporate these design features into its games, though this is a minor complaint at worst. It is, however, a little weird to not have these movements accessible while the enemies on the screen dodge and roll all over the place.

In the first game, multiplayer action was pretty basic. This time around, Gameloft pulled out all the stops. Players have access to online and local multiplayer game modes, including Deathmatch, Capture-the-Flag, and Freeze Tag. There are a total of ten online maps to play through, it’s extremely easy to go online and find other people to play with, and the connections are extremely reliable. 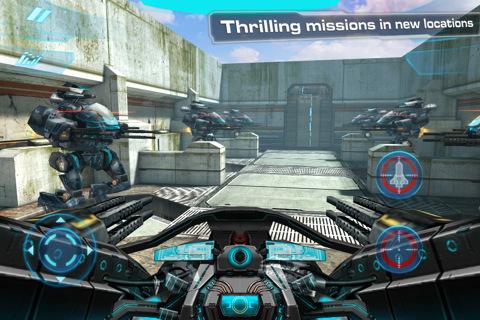 Visually, the game looks great. Things don’t look all that different from the original game (which looked stunning when it came out and things still look pretty good), although it seems like there’s a bit more detail present in character and level designs. This is still a Halo clone -though that’s only meant as a compliment- and the graphics will be a constant reminder of this fact.

The audio, of course, is equally solid. The music is appropriately epic, the sound effects all feel in place, and the voice acting (as heard when Wardin’s colleagues communicate with him) is surprisingly decent.

Even though N.O.V.A. 2 doesn’t look significantly different from its predecessor, it does seem like there’s more action taking place on the screen at one time without any noticeable slowdown. This is particularly obvious when players find themselves manning turrets to mow down hordes or invading aliens, which almost makes up for the fact that these bits aren’t as much fun as the rest of the game. We tested the game on an iPhone 4, and the game looks very crisp and runs very smooth on Apple’s latest device.

With N.O.V.A. 2, Gameloft’s reputation for awesome FPS games continues to be well-earned. In some ways, the game is an improvement over its prequel, though its developers didn’t try to fix anything that wasn’t broken. It’s easily one of the best shooters available on the iPhone, and many will argue that it’s the best. Fans of the genre will be doing themselves a disservice if they pass this game up.