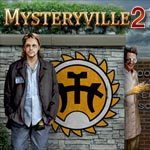 Journalist Laura Winner just can’t get enough of the odd little town of Mysteryville. After investigating the riddle of the missing cats in the first Mysteryville adventure, she returns for a visit and in spite of only wanting a relaxing vacation, finds herself sucked into another mystery. Mysteryville 2 is very similar to the first game’s hidden object and puzzle-solving gameplay style, but offers a new story and a chance to catch up with familiar characters.

Laura comes to Mysteryville on the invitation of old acquaintance Bill Witowsky. However, she arrives in the town to find Bill missing and an art and jewellery auction about to take place organized by the town’s new priest. Could Bill’s disappearance and this auction, which is totally out of character for a small town like Mysteryville, be somehow tied together? It’s up to Laura to find out, with your help of course.

Like the Mystery Case Files, Hidden Expedition and Dream Day games (and the original Mysteryville), the primary goal of Mysteryville 2 is to search for lists of objects that are hidden in various clutter-filled rooms within a given time limit. What’s nice about the Mysteryville games, however, is that Laura actually gets to interact with people in the town and the puzzles are well integrated with the dialogue and plot of the game.

Instead of just searching rooms for random junk, it feels like every hidden object search has a point to it and can be explained logically in the context of the story. For example, Laura helps the priest search for ornamental cups by plucking a certain number of them out of the environment, or collects all the suit jackets for the dry cleaner so that they don’t get ruined by the store’s leaky pipes.

Even when the list of things to find contains random items, it’s usually explained by Laura having to sort through a messy room to search for one specific object (a pair of eyeglasses or a camera) that a character has asked for.

Other variations on the hidden object theme that will be encountered in Mysteryville 2 include searching a dimmed (though not pitch black) room with a flashlight, finding objects based only on their silhouettes, collecting pairs of items such as fruit and timepieces, and comparing two versions of the room side-by-side to note the differences between them.

There are also a few different puzzles to break up the hidden object action, such as tile-swapping and concentration card-matching challenges, and deciphering scrambled messages.

The game offers a hint system, but don’t expect to be able to rely on it too much. After using the hint once to reveal the location of an item, it takes quite a long time for the meter to recharge before you can use it again. You’ll also be penalized for random clicking to the tune of 20 precious seconds subtracted from the clock.

Over the course of the game you’ll get to interact with several of the town’s inhabitants, including some new faces and some who will be familiar from the first game but have assumed new responsibilities in the town. Interacting with these characters – a few standouts being the creepy scientist and the slovenly small-town sheriff – are big part of what helps to set Mysteryville 2 apart from other hidden object games.

The characters and story that flesh out the experience make Mysteryville 2 a fun ride while it lasts, but that said it’ll only take an evening or two to blow through all of the game’s 22 stages – even with the challenging time restrictions that the game imposes on later levels. And since the game is so rigidly laid out, there’s not a whole lot of variation if you do decide to play through a second time.

The game’s ending indicates that this might not be the last we’ll see of Laura and leaves things wide open for another sequel. While we at Gamezebo will be looking forward to it, here’s hoping that the next Mysteryville adventure is a longer one.