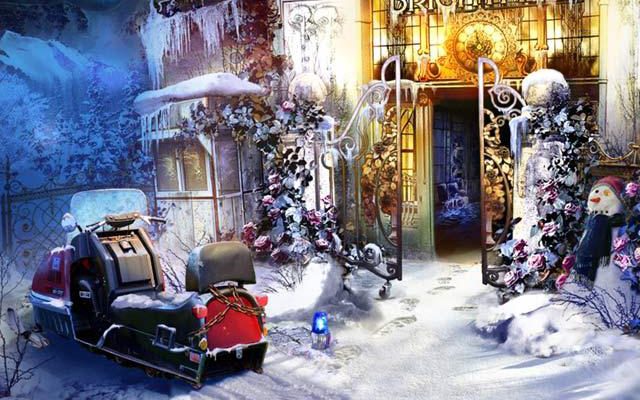 Perhaps the biggest mystery is why you haven’t downloaded this yet.

I admit, I’m a confirmed pessimist. While I’ve played (and loved) all the Mystery Trackers games, I can’t help but harbor the perverse expectation that one day the games’ makers—Elephant Games—will let me down. Fortunately, today is not that day. With the release of Mystery Trackers: The Four Aces, the fourth in the Mystery Trackers series, Elephant has once again proven its hidden object/puzzle game prowess with a near-perfect example of casual interactive entertainment.

If you’ve never played the Mystery Trackers games, here’s the schtick. You’re a detective…a member of the shadowy titular organization, and as such you investigate mysterious happenings. In The Four Aces, you’re assigned to check out a series of unexplained animal attacks that have forced the evacuation of the otherwise unremarkable town of Brightfield. Preliminary reports suggest the perpetrators of the attacks are a four-person criminal syndicate called (wait for it!) The Four Aces; they also indicate that the group has been conducting bizarre genetic experiments for as-yet-unknown reasons. 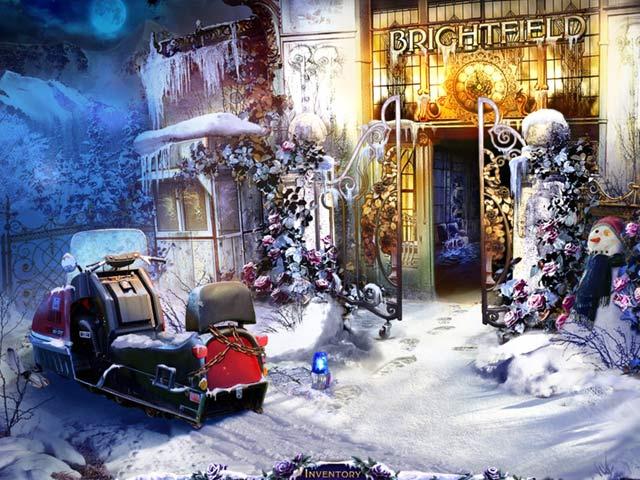 Your investigation starts with the unexpected appearance of a young woman. Though the town’s been officially evacuated, the girl’s still there, earnestly searching the streets for her fiancé. Her appearance heralds more than doom, however; it signals The Four Aces’ slide into ‘cliche-ville’. Time and again, hidden object games employ a gimmick wherein a villainous figure or damsel in distress repeatedly appears to lead you through the game. In the former, the villain periodically shows up to taunt you and express doubt of your abilities, and in the latter, the victim—damsel, child, boyfriend, etc—appears just long enough to scream for help right before being dragged out of reach. The Four Aces employs both of these techniques heartily, and for me, they’re both too predictable for such an accomplished development team.

Luckily, that’s about the only aspect of The Four Aces that could stand some improvement. Otherwise, it’s a fantastic game. To begin with, there’s the ambient, intriguing, mildly revolting Island of Dr. Moreau–like premise. Throughout the game you’ll encounter and collect creepy hybrid animals like the “arachnunk” (spider-chipmunk) and the “hedgecrab” (hedgehog-crab); these are kept in a main menu menagerie; a Wikipedia of horrors. As the investigation progresses, you find out more disturbing detail about The Four Aces’ genetic aberrations, and discover a related side story of star-crossed lovers. Both stories are told in an extremely dynamic way, with more live-action cinematics than I’ve ever seen in a game of this genre. Better still, you can watch these cutscenes again at any time, from within the game’s menu.

All the characters in the game are real actors, and there’s an impressive amount of voice recording to go along with their presence. Their performances are appropriately over-the-top, and do a lot to help the game hold a suspension of disbelief  against the colorfully baroque backgrounds. Speaking of which, he game’s environments are wonderful! With that said, my favorite content graphically speaking is by far the game’s approach to hidden object scenes. It takes real finesse to execute these oft-repeated moments well (as evidenced by the many bad ones out there), and Elephant Games? Well they could just about teach a seminar on the subject. While the hidden object gameplay isn’t particularly innovative—you’re still finding objects and/or activating others by moving things around—the scenes themselves are extremely well-constructed out of items that make perfect sense within the context of the story. Every scene is composed with an eye toward aesthetics and scenes are often triggered by solving a preliminary puzzle. The whole experience amounts to a layered traversal of an meticulously crafted world, rather than being a disheartening stumble through piles of stuff. 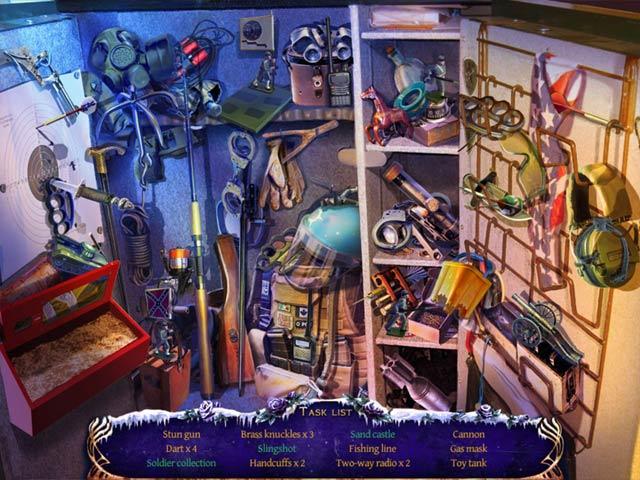 Perhaps what’s most fun, though, is overcoming obstacles with the help of your trusty mutt, Elf. Elf appeared in Mystery Trackers: Black Isle and here he proves just as useful. Too big to fit between close-set iron bars to retrieve that screwdriver? Need something dug out of the snow? It’s Elf to the rescue! He trots around cleverly in a red winter coat, braving cobwebs and dust-bunnies and chasing off hostile creatures with his yappy little bark. In addition to teaming up with Elf, you can buy things for him in the Dog Store with red and black poker chips you collect throughout the game. Buying doggie toys does nothing to advance your investigation, but I admit, I got a kick out of watching Elf get adorably excited when I gave him a new ball or a new dog dish.

Aside from allowing you to indulge your dog-nerdiness, The Four Aces also solves the persistent hidden object problem of backtracking; locations are expansive, but the game allows you to easily navigate them simply. Via your journal map, you can see current objectives marked in yellow, preventing you from wasting time searching for interactivity. In that vein, The Four Aces has a ton of things with which to engage. Some games present one or two interactive areas per location, and as a result, feel lifeless. Here, each scene has between five and eight interactive areas, including amusing hero commentary. The difference is astounding, and feels like a breath of fresh air.

In addition to offering a truly great main game, The Four Aces offers great extras as a Collecter’s Edition. Bonus content includes a screensaver, music tracks, concept art, wallpapers, (I particularly like these because they aren’t just screens from the game—they’re custom images!) and extra video which contains both a teaser trailer and a funny behind-the-scenes featurette showing the live actors’ outtakes. The game’s bonus chapter is also far more than a tack-on. It takes you back to the town of Brightfield some time after the events of the main game to investigate the disappearance of four of the town’s residents. Unlike many other games’ bonus chapters, The Four Aces’ effort is its own tight little narrative that also serves as a cliffhanger for what promises to be a larger story arc developed in future Mystery Trackers games. 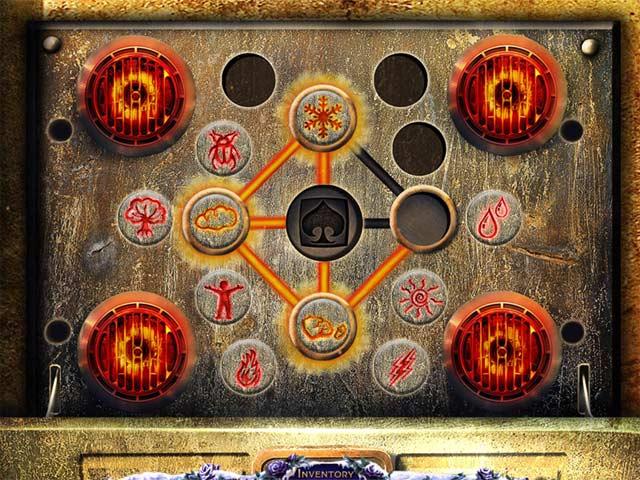 Mystery Trackers: The Four Aces is an excellent hidden object game and well worth the Collector’s Edition price. Although it takes the easy way out by adopting the somewhat overused “carrot-on-a-stick” narrative device, it still follows through on an interesting premise. Further, it backs that premise up with amazing graphics and sound, elegant level/map design, beautifully constructed hidden object scenes, fun side objectives and a cute little four-legged sidekick. Finally, it wraps things up with nice extras and a really tight bonus chapter that both works as its own story and serves as a fictional bridge to what comes next. And personally? I can’t wait.