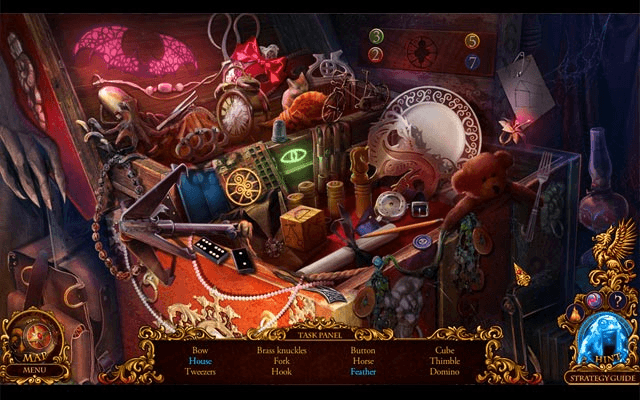 Evil hits too close for comfort when a long-time nemesis of the Mystery Trackers attacks the organization’s hallowed home base.

In my last Mystery Trackers review, I mentioned worrying that one day the series would let me down. After all, one company can only crank out hits for so long; then again, if you’re Elephant Games, the usual rules might not apply. Having seemed at first a knock-off of Big Fish’s own Mystery Case Files, Mystery Trackers has now officially eclipsed that franchise both in terms of game concepts and execution, as its latest title, Mystery Trackers: Silent Hollow clearly demonstrates.

The Mystery Trackers series casts you as an agent in a powerful cabal of super-detectives who are equal parts James Bond and Miss Marple. In Silent Hollow, you’re unexpectedly summoned to Mystery Trackers HQ which has been devastated by a series of attacks. You arrive to find both the building and the town around it beset by strange floating masks—bizarre mechanisms that appear to have the power to control people’s minds. Not even your talented fellow agents can resist the masks’ malevolent influence, and as the agents are overcome, the centuries-old Mystery Trackers organization finds itself on the verge of collapse. 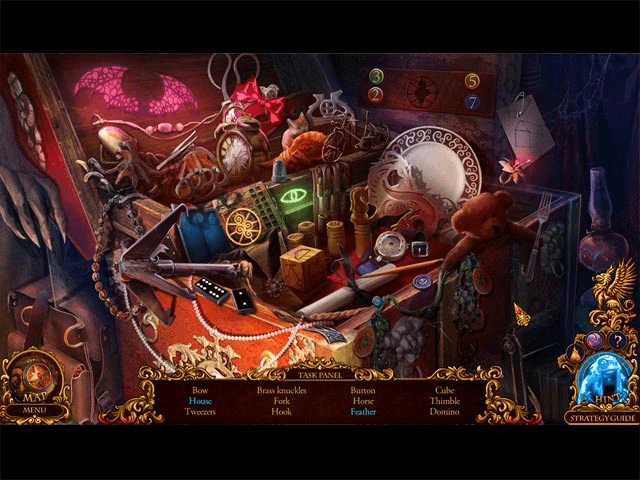 Fortunately, you seem immune to the floating masks’ parlor tricks. Your canine sidekick Elf is also hypnosis-resistant, and the two of you team up to catch the puppet master controlling the masks. Silent Hollow lives up to previous Mystery Trackers games in every respect: it’s beautiful, varied, highly interactive, and packed with dynamic storytelling cutscenes. Each location gives you numerous things to do, and the hunting aspect is augmented by special gadgets that let you see things you can’t see with the naked eye. The game’s hidden object scenes are just as well-composed as in previous titles, and continue to be built of items that make sense within the context. These scenes trigger in interesting ways and contain interactivity that is not only clever, but advances the story as well.

Storytelling is the focus of Silent Hollow,and in addition to cutscenes and hidden object scenes, it employs a range of other smart storytelling gimmicks. As you progress, a weird device records images of people and gadgets and returns data about them in the form of “secret files.” These become a manual of sorts that fills you in on the things you encounter, and provides you with lots of inside information about the Mystery Trackers. Similarly, throughout the game you’ll collect your fellow agents’ pets (you have Elf to help you—other agents have talented moles, turtles, and hedgehogs) and these too become a special source of intelligence. On top of these, in and around the HQ, you run across films, tapestries, and mechanical puppet shows that illustrate the history of the organization, as well as its run-ins with seemingly immortal uber-villain, Morpheus. 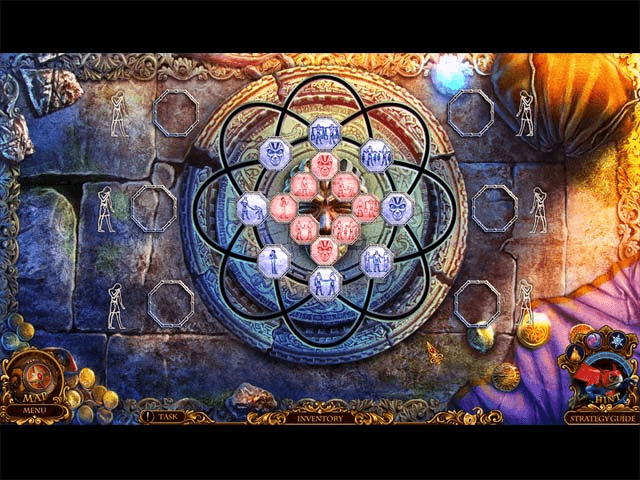 While all Mystery Trackers games tell a good story, what makes Silent Hollow different from the others is its Double-Oh-Seven-like reliance on nifty gadgets. Mystery Trackers agents are hired for their special powers: some can teleport, some can attract lightning, and some have telekinesis. If they don’t have special powers, however, the agency can give them some via special injection. Here you’re given the power to start fires, freeze things, and un-hypnotize people (and animals), and all three of these abilities frequently come in handy. It’s like you’re a mutant hybrid of Sherlock Holmes and the X-Men, and who wouldn’t want that? Even little Elf gets a cool new bullet-proof vest and his own walkie-talkie.

The gadgets represent the innovative side of Silent Hollow;the puzzles represent the side that leans toward the tried-and-true. As in past Mystery Trackers games, the puzzles are often familiar—being of the spinning color wheel or image reassembly variety—however, they’re rendered uniquely enough to make that forgivable. As mentioned, the game’s graphics maintain the luminous standard of the series, as do the live-action characters. Occasionally, the dubbed English voices clash pretty seriously with the look of individual characters, but the narrator, who you hear the most, is perfectly cast. The game’s music, which features five new themes by composer Yuri Ginzburg, is also perfect and effectively conveys the suspense and mystery of previous musical scores.

Once you and Elf have saved the day in the main game, you unlock an additional hour of gameplay in Silent Hollow‘s bonus chapter. In it, agents are disappearing and all evidence points to a culprit with time-traveling abilities. Sadly, although the time travel idea is interesting, this section is far less compelling since it takes no pains to explain events or even make them logical. Also less than thrilling is an extra called the “Secret Room.” The Secret Room gives you the questionable opportunity to play through chunks of the game again in order to gather portraits of the world’s most illustrious detectives (none of whom are referred to by name and whose descriptions could baffle some gamers). It’s basically a rehash of things you’ve already played, and although you get an exclusive wallpaper for doing it, it smacks of content padding. 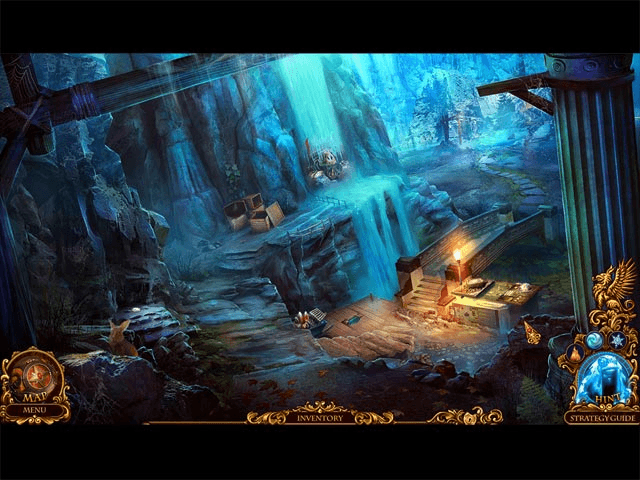 A better extra is the shop. Throughout the game, you collect ducats which can then be used to purchase fun little items. Your good buddy Elf is now a family man—er…dog, and you can buy him and his furry brood a number of cool toys and luxury items. You can also spend your ducats on menu customizations like icons and skins for your hint toad. The latter are hilarious and come with special skin-specific animations. Other extras include a strategy guide, a dossier full of secret files, an Achievements gallery, a glossary of Mystery Trackers pets, wallpapers, concept art, music tracks, and a very weird green screen video. (You’ll have to check it out for yourself.)

Mystery Trackers: Silent Hollow is an impressive game. It combines the familiar with the innovative in just the right measure, and focuses all of its elements on serving the story. Although the bonus chapter is a touch lackluster and the Secret Room extra is more or less unnecessary, the game’s overall high quality and other fun extras make it well worth the cost.