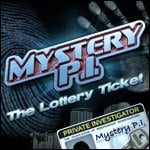 Who doesn’t dream of winning the lottery? For most, there’s one problem with the lottery — you can’t win unless you pay for a ticket. In Mystery P.I.: The Lottery Ticket, Grandma Rose is the owner of the winning lottery ticket. She’s lost the ticket and hires you, a private investigator, to search for it. As a reward for finding the ticket within 12 hours, Grandma Rose will pay you $20 million dollars. The bad news is that you can’t retire on game money, but you’ll feel like a million bucks if you find the ticket.

It’s difficult for a game to stand out in the flurry of available hidden object games in the casual games market. To stand out takes unexpected turns, a strong storyline, and absorbing mini-games. Mystery P.I.: The Lottery Ticket manages to succeed in the latter two. Though it should be noted, it only has one mini-game, Memory cards, unless you count the keys game where you find 20 keys to unlock a bonus game mode, Unlimited Seek and Find. Here you can search for over 2000 items in every location that appears in the game along with a bonus location.

Since you’re most likely new to this private investigation business, Mystery P.I. goes easy by giving you a short list of objects to find in a couple of places within the city. With experience and points come promotions and more objects to find in more locales. The earlier stages of the game require finding roughly 20 objects while later stages call for locating over 80 items! Searching for 80-plus items sounds dreary, but the game compels you to keep hunting.

The game will challenge the experienced hidden object gamers with tricky items such as “5 spots.” The game regularly calls for finding the same items such as “4 masks, 3 apples, 2 hammers, and so on.” So instinct says to find five different spots, but that’s not the case. Pros often search for objects by looking for their color around the scene, but that won’t always work. Some of the scenes take place underwater giving objects a new perspective. Furthermore, as players progress up the P.I. ladder, more objects appear in scenes making it harder to find the ones needed.

It’s common for hidden object games to reuse objects and scenes. It’s how often the game recycles objects and scenes that affects the game’s quality. Mystery P.I. aces the reusability test thanks to the game’s wide-ranging objects and scenes. Yes, scenes appear multiple times, but the variety is such that by the time you come back to the scene, you won’t remember where any previously located object is in the scene. Furthermore, the chances are good that the game won’t ask you to find the same objects from the same scene countless times. It isn’t until more than halfway through the game that more scenes look familiar and objects repeatedly appear.

After finding enough items to complete a level, the next step is to play a memory game. A change of pace is that every memory game does not require finding identical objects. It may require finding objects of the same color, objects that are similar but not identical, or objects that go together such as a lamp and a light bulb or horse and a saddle. You receive a clue after finishing the matches. Since the game has 20 levels, there are 20 clues to collect leading up to the big clue for finding the lottery ticket.

The game frustrates on a few points. Clicking an object, especially a thin one, doesn’t always take. Not everyone can click precisely on skinny objects. The game goes a little too far in an effort to fool the player. A player could find an item in the list, but it wouldn’t be the correct one though technically it could be. Some of the items in the list sound quirky to attempt to confuse the player.

As for the replay value, it depends on whether the player wants to spend hours reaching the end of the game. The game lasts a long time, but it may be too long for a replay. It’s not clear how quickly the timer runs down, and who wants to make it to level 18 when the timer runs out and start over? The long play is a blessing and a curse. Mystery P.I.: The Lottery Ticket triumphs due to its scene and object assortment, solid storyline, long playability, and its ability to challenge the hidden object veteran.