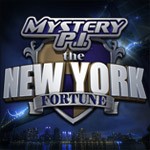 The story sounds similar to the original. Instead of an older woman hiring you to find her ticket to her fortune, a billionaire’s family hires you to find a hidden fortune within 17 hours or else it goes to the cat and dog. Upon success, the family will reward you with a fake $25 million. Obviously, the estate contains a vast fortune. That’s all there is to the story until you wrap it up in the end.

Mystery P.I. – The New York Fortune is a no frills hidden object game where the list of items to find can challenge the experienced hunter. Players can find all items to earn bonus points or solve the puzzle as soon as they find the minimum required items (such as 37 out of 40 available or 66 out of 70). Players earn a bonus when finding every object in a level. You get so many points in the game, however, that the score is really of little interest.

Because of this, players won’t feel reluctant to take advantage of every hint. A hint costs $7,500, while each item is worth $5,000 and speed bonuses add $2,500 for the first item. So for every two found objects, you have enough dough for a hint.

Players will see the hint system as good or bad. In either case, it’s up to the players whether they want to limit the use of hints or go crazy. However, you can’t repeatedly ask for hints, as the hint meter needs to fill back up before using it again. Or you can change the game’s options to provide unlimited hints and even turn off the timer for a stress-free game. The game took about six hours to complete leaving a plentiful 11 hours from the deadline.

As for the objects and their clues, Mystery P.I. comes through again with its challenging list. For example, 2 horses: one is a seahorse. “Angel’s instrument” is a harp. “Repeat after me” is “ME REPEAT.” A trick one is “Cools in the air.”

Locations go beyond places such as the Bronx, baseball stadium, night club, subway, Times Square, and Stock Exchange. The game also takes you inside things such as an antique collection, which displays stamps and coins in a box. It takes a few levels to meet all the locations and then they become regulars for over half of the game. Don’t be surprised if you get faster at finding objects in the latter part of the game as you’ll remember where objects were from seeing them in the scenes previously.

Hidden objects don’t have much to do with the story, but finding them leads to the mini-games, which reveal one clue per level and the game contains 25 levels with multiple locations in each. At the end, all the clues come together to reveal what you need to know to find the fortune. The game promotes players based on points earned – nothing exciting.

Upon completing a level, you play one of four mini-games. One involves rotating circles to fit the puzzle, an original idea as those circles play tricks on your eyes. Match three requires making matches of three or more items until all the gray squares turn blue.  Another game provides a list of common objects to find in a crossword puzzle. Then finally, you swap square pieces on a puzzle until the puzzle replicates the picture shown. These provide a nice variety, but don’t get harder with progress.

Every unique location hides one key and one apple. Find 25 of each to unlock unlimited game modes. One mode is “spot the differences.” Since story mode has no spot the differences, this provides a fresh game to play although it uses the same scenes and objects. Because of this, it may not take you long to find differences after spending 25 levels with these scenes and objects. The other mode is unlimited seek and find where you find every single object.

Music and sound effects suit the game, although it would’ve been nice to hear some famous New York and Broadway tunes. But then you have copyright issues. Who wants to mess with that?

Few hidden object games tempt players to replay them as there’s little difference. The game indeed provides new items to find, but those objects won’t be unfamiliar as they have been in the scenes throughout the first play. It would be better to play one of the other game modes for a better replay value.

Clicking objects works well in Mystery P.I. – The New York Fortune. One of the biggest frustrations with the hidden object genre is clicking a correct object and the game not accepting the click. This one works smoothly and keeps the frustration level low. While this one doesn’t have a wow factor, it’s a good ole traditional and sturdy hidden object game with almost everything you expect in such a game: good graphics, clicks that work, decent mini-games, and options for a more relaxing game mode.