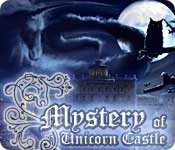 Enter Mystery of Unicorn Castle to transport yourself into a scene that could have come from an Agatha Christie novel. Jane Morion receives a letter from Lord Morion claiming to be a relative on her father’s side and asking her to come to England regarding the inheritance of a family castle. Upon her arrival, Jane learns that others have received the same latter, and thus begins your hidden object game mystery.

Lord Morion appears in a video recording that explains one of the visitors will inherit the castle. The one who can find the secret heart of the castle earns owner’s rights to the castle. In typical mystery novel fashion, the characters introduce themselves, running the gamut from the gal who talks like a teenager, the spoiled son, a retired police inspector, a historian, and you as Jane Morion.

Oh, and to add more drama, the family is cursed. Many family members would become insane or their spirits can’t leave the castle for an eternity.

You can find objects in five ways: The standard list of objects to find, silhouettes of the objects, compare identical scenes and find differences, clear out a room of objects that don’t belong, and find pairs of objects.

Needed items sometimes hide in a box or on cabinet shelves. Before opening them, you must solve a mini-game. The gears mini-game involves putting the right-sized gears on the board until they all start rotating so you can open doors. Create match threes until the chest unlocks or turn squares with pictures to create a path from the key to the lock to unlock a secret box. Jigsaw puzzles also serve a purpose to put together things that fell apart or broke like glasses or old parchment.

Mystery of Unicorn Castle offers just the right amount of mini-games and variety. No memory game in this one! Mini-games can grow old after a few times, but these take care not to overstay their welcome in the game. Furthermore, the mini-games and different ways of finding hidden objects all have a purpose in the story – something few games manage to pull off with great success.

Not all is perfect. In the rooms where you clear junk that doesn’t belong, some objects actually could belong. For example, the kitchen has a fireplace, and the bellows "doesn’t belong." Why not? Bellows go with fireplaces. Rooms that call for picking up a bunch of the same thing can also be confusing. The nursery, for example, lists toys, but you might argue that some items should count as toys even though they don’t.

The scenes take more than average time to load especially after unlocking a box. When clicking to view the options or receiving a note that you’ve unlocked the box, the dialogue box uses an unnecessary slow effect.

Many hidden object games come with dark scenes where you have a flashlight in the form of a circle. So all you can see appears in the circle. Mystery of Unicorn Castle offers a better way of doing dark scenes. It starts with a circle until you find candles and matches. Put the candles in the candleholders and light those with the matches for a view easier on the eyes.

The music suits the story to a tee with creepy sounds like footsteps and knocking, and you’ll see plenty of sinister-looking scenes to absorb you into the mystery. Although a couple of light cuss words appear in the dialogue including h-e-double hockey sticks and rhymes with dam. However, considering the spooky theme, it would probably be better for kids not old enough for such words to skip the game.

Although Mystery of Unicorn Castle doesn’t last as long as might expect of a hidden object game (expect 3 to 5 hours of gameplay), it’s not a bad thing here because you don’t encounter repeated objects and scenes. Sure, you’ll revisit a room, but you never see the same objects or do the same thing twice. For example, you’ll find a list of objects to find in the kitchen, and when you return later, this time you must find pairs of objects. Games that last for a long time tend to reuse scenes and objects.

The game comes with one mode and there’s not a lot of replay value. Once the story ends – and it wraps up nicely without loose or incomplete threads – you’ve done all you can. Players of all hidden object experiences will find Mystery of Unicorn Castle a worthy adventure that offers an intriguing story without overdoing the dialogue where you do more than just seek and find.

10 Days Under the Sea Review