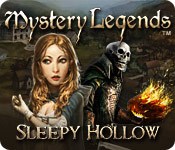 The Headless Horseman is a well-known figure in American folklore – the ghost of a soldier who terrorized the residents of Sleepy Hollow by riding out at night to search for his lost head while relieving unlucky townspeople of theirs. In Mystery Legends: Sleepy Hollow, you’ll experience the story as told through a spooky hidden object game.

Mystery Legends: Sleepy Hollow is a hidden object game (HOG) that sticks close to its roots, ucking the fairly recent trend of HOGs that have started to incorporate extras like inventory items, multiple rooms and heavy puzzle-solving challenges into the gameplay.

Instead, the game is divided into 12 chapters where you’ll search Sleepy Hollow for between 24 and 80 clues to reveal the Headless Horseman’s next victim. These clues are spread across more than 20 locations including the stables, schoolhouse, town square, church, boathouse, graveyard, and the infamous town bridge.

In typical hidden object game fashion, your job is to scour each scene for a list of items, such as butterfly, apple and broom, before the timer runs down. (There’s also a relaxed mode.) What’s nice about Mystery Legends: Sleepy Hollow is that the items more or less make sense in the context of the location, and are beautifully blended to create attractive-looking scenes. For example, in the stable you might be asked to find a branding iron, harness and salt block – all things that relate to horses.

You start off with three hints and can earn more by finding the jack-o-lantern in each scene. Using a hint generates a large glowing ring around an item, which can be imprecise at times, but otherwise the hints system works quite well. As well, if you’re a bit stuck but don’t want to use a full hint yet, you can run your cursor over the item’s name and a picture of its silhouette will appear to help you out.

Every so often you’ll encounter a sparkly item in a scene; these open up a mini-game that has to be solved before that item can be picked up. Some mini-games are more challenging than others, from a simple "put the stained glass window back together" puzzle to having to fit objects into a tight container by arranging them so that none are overlapping. Generally, I looked forward to the mini-games with the exception of one where the goal was to stick pins into a voodoo doll. The pins had to be stuck in a certain order, which as far as I could tell there was no actual pattern to, so it became a game of trial and error.

Perhaps because it’s set in the "olden days," the game offers up some esoteric objects that had me either guessing or running to a dictionary. Some samples include "garden cloche," which is apparently a mini-tent thing, "nocturnal," (some sort of ruler?) and a "ciborium" – a kind of chalice.

You must find all but two clues in each chapter to advance to the final scene, where you’ll be asked to find two lists of items (like 15 fishing hooks and 15 axes), after which the fate of the townsperson will be revealed. (Hint: it’s typically not pretty.)

Production values are quite high, from the beautifully painted scenes and backdrops to spooky sound effects and a fully voiced narrator. Every so often you’ll hear the Headless Horseman himself, whose creepy voice growls out random threats like "Your head belongs to me!" or "Blood, bone and flesh!" (Eww…)

The dialogue itself, though, is a bit hackneyed. Sometimes the narrative lapses into a clumsy rhyming scheme, while other times it reverts back to normal prose. The ending is abrupt and rather disappointing given the build-up.

The game should clock in at around three or four hours, and items show up in different places on subsequent playthroughs so there’s some replay value. Aside from a few niggles here and there, Mystery Legends: Sleepy Hollow is a well-made and atmospheric hidden object game that will especially please HOG purists.

Mr. Biscuits: The Case of the Ocean Pearl Review