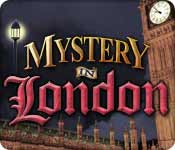 In the late 19th century, a man the newspapers nicknamed Jack the Ripper committed a series of gruesome murders in London’s East End. He was never caught, and the case remains unsolved to this day. In Mystery in London, the latest hidden object adventure from Big Fish Games, you’ll attempt what countless sleuths and scholars – both amateur and professional – have tried and failed to do: discover the identity of Jack the Ripper.

Although its name is different, Mystery in London shares a lot in common with the Travelogue 360 games (Paris and Rome), and uses the same panoramic technology to immerse players in a scene by letting them look a full 360 degrees in any direction as well as up and down. The technology is cool, but definitely an acquired taste. The good news for people who prefer the more traditional approach is that you can turn off the panning in favour of a static view consisting of 16 individual photos pieced together.

The story goes that you’re a collector of old books and curiosities who happens to be visiting London on vacation. During your stay, you pop into some shops to look for items to add to your collection, and come across a valuable copy of the novel Dr. Jeckyll and Mr. Hyde – along with a mysterious note signed by “JR.”

Through some further investigating, you realize that the information you’ve been collecting has put you onto the trail of Jack the Ripper after all these years. You’ll also discover that certain people don’t want Jack’s true identity to come out, and will stop at nothing to make sure he remains an unsolved mystery.

Of course, this story is also a convenient excuse to explore the beautiful city of London as you search for clues. Thirty of London’s most iconic locations have been recreated in 360-degree panoramic view, including Piccadilly Circus, the Savoy Hotel and Theatre, Westminster Abby, Tower Bridge, the Tower of London, Hamley’s Toy Store, and various pubs. After clearing each location you’ll unlock a Fun Fact that shares a little bit about the history of each place.

The game is divided into 16 chapters, and in typical hidden object game fashion you’ll have to search a specific set of locations to find a list of items that are scattered in amongst the rest of the scenery. Many of these items will seem random – like a pair of boots, a set of false teeth, a butterfly or a lemon – but others will be important clues that will help your investigation, such as a letter, newspaper clipping or old photograph.

Sometimes the lists of items will be organized into groups; for example, you might have to find items relating to food and drink, objects with wings, tools or numbers. Another way the game shakes things up is by asking you to find all the moving items in a scene – these will be items that pulsate slightly. I wasn’t such a fan of the moving items, since after staring for a while everything on the screen looks like it’s pulsating, and the effect is hard on the eyes. You’ll also get lists of items where only the silhouette is shown and you have to pick it out based on that instead of its name.

In between each chapter are mini-games that provide a short change of pace from the usual hidden object searches. You might have to complete a word search, beat another character at a game of Reversi, complete a colored ball puzzle, decipher a lock mechanism, compare two pictures side-by-side to find the differences between them, assemble a timepiece, or play a game of concentration. The mini-games are better and more challenging than average – and you can also use a limited number of Skips to bypass them altogether if you’re so inclined.

Although it fits the story, from a gameplay perspective it’s a shame that so many of the scenes depict the insides of shops. Aside from the toy shop, which is just awesome, you’ll unfortunately spend a great deal of time staring at bolts of fabric, rows of neckties, pipes and other merchandise, which isn’t all that interesting. The story also starts to drag mid-way through the game as you begin to revisit the same locations over and over again.

Many of the levels are so chock full of stuff (or like the ceiling of St. Paul’s, just generally busy), that the prospect of finding items in the extreme clutter can start to seem overwhelming. Although to the game’s credit, it lets you use a magnifying glass to zoom in on an area, which helps, and there’s a hint system that gives you between 2 and 8 hints to use per level.

I enjoyed the music and sound effects in the game – particularly the voice-over narrative. However, I noticed a couple of typos in the text and the odd hiccup in the music that prevented it from looping smoothly.

A bit of tightening and a few more imaginative and colorful locations would have made Mystery in London that much better. As it stands, the game is no Mystery Case Files: Madame Fate but it still provides a decent hidden object fix and it’s a good way to learn some things you didn’t know about the city of London.