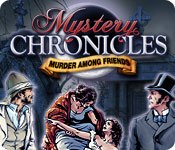 Hidden object mystery games are so popular these days that developers can’t seem to make them fast enough to keep up with the demand! The latest seek-and-find whodunit is Mystery Chronicles – A Murder Among Friends, a game that puts your sleuthing and puzzle-solving skills to the test in 19th-century France.

The story, told through watercolor-style illustrations, begins when the Parisian main character gets a letter from his cousin Charles in Lyon saying that strange things have been happening. You travel to Lyon to help only to find Charles and his wife dead and their children missing.

In order to find the children and discover who murdered their parents, you must search a variety of locations including the house, garden, garage and surrounding areas for clues. In typical hidden object game fashion, you’re given a series of items to search for (such as a coffee grinder, broom and candelabrum) and will need a keen eye to pick them out of the cluttered scenery.

Some of the items you find will be key clues that reveal something new about the case, such as bullet casings or torn up notes that must be pieced back together. Other mini-games are woven into the gameplay too, like Sudoku, word searches, lockpicking, sliding block and mirror puzzles. You can skip any puzzle, but doing so costs 10 minutes off your timer.

The scenes are pretty and items have been carefully chosen and well-integrated to make sense in the context of the location and story. (In other words, you won’t see strange things like UFOs or cell phones.) The downside is that the items do tend to repeat themselves very frequently. Some of them can also be quite small and hard to see, especially when they’re tucked into a shadowy part of the scene.

Another minor annoyance is the hints system. Players are given unlimited hints, but must wait for the meter to recharge each time. Problem is, the hint meter takes two full minutes to recharge, which is far too long. I often found myself stumped at the end of a level with one or two items left to find nothing left to do but wait out the clock in order to grab a hint. I found myself wishing I could just sacrifice some time off the clock to use hints more quickly – a system used successfully by other hidden object games.

A mystery game is only as good as its story, and Mystery Chronicles – A Murder Among Friends falls a little flat here as well as with a plot that seems to be trying to cram in one too many murder mystery clichés. The result is a story that lurches oddly from a straight-up murder mystery to something involving secret artifacts and cryptic graveyard investigations.

That said, the mini-games help to keep things fresh (even though they’re common puzzle variations that veterans will have seen before), and the game does mix up the hidden object gameplay every so often by having silhouettes and two-part clues like "7 pencils in white tray," where you have to find seven pencils in the scene and drag them onto to a tray.

There are also some interesting animated scenes, including a storm scene darkened with heavy rain that’s lit up by the occasional flash of lightning. The orchestral soundtrack is above average as well.

A more coherent story and more innovative mini-games would have helped Mystery Chronicles – A Murder Among Friends to better distinguish itself in an extremely crowded genre. As it stands, it’s a good hidden object game but does little to stand out.

Globey – On The Roll! Review