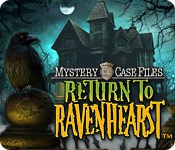 Mystery Case Files: Ravenhearst marked a turning point in the MCF series that saw its tone shift from light-hearted crimefighting romp to something decidedly deeper, darker and more supernatural. In a nice show of symmetry, Mystery Case Files: Return to Ravenhearst, the fifth MCF game, is not only a return but also a second turning point that takes the series away from a hidden object focus and towards a full-fledged point-and-click adventure.

Don’t worry all you hidden object fans, though, because the game hasn’t forgotten its roots. The hallmark hidden object challenges and fiendish logic puzzles are still present and accounted for, but now you can also freely roam from room to room, use the mouse pointer to investigate sparkly objects of interest in a scene, pick up items to add to your inventory, and use them to solve puzzles and unlock new areas.

As for the story, if you thought the case of Ravenhearst Manor was solved when you freed the soul of Emma Ravenhearst from her murderer Charles Dalimar, think again. Now Charles’s vengeful spirit is on the loose, and as a detective you’re sent back to the desolate old manor to find more answers. What you discover is that there are more ghosts than just Emma’s who are bound to Ravenhearst. You must find a way to free them and, hopefully, put a stop to Charles for good.

The hidden object portions of the game are realized as "scenes within a scene." In other words, you can click on certain parts of a location to open up a zoomed in view (like a bathtub from within the bathroom) that ask you to find a list of objects in the scene. Once you’ve found all the objects, the scene zooms back out and you’re left with one key item to keep. This is how you find the majority of items for your inventory.

The hidden object scenes are well done. A complaint, though, is that some of the items are tiny to the point that it’s hard on the eyes – a primary example being having to search a tiny dollhouse for even tinier sewing machines and other furniture. Unlike MCF: Madame Fate, there are unlimited hints so you can never truly get stuck. The hint meter takes a long time to reload, but it refills even as you’re walking around and doing other things, so if you’re stuck you can leave a puzzle completely and come back to it later.

The famous door puzzles are just as clever and inventive as they have been in past games. Even a simple memory game isn’t completely straightforward, because the tiles actually rotate and move around every few moves instead of staying still until you’ve flipped them all up. The more taxing puzzles can be skipped, so again, there’s no way to become truly stuck. However, skipping will add another 30 minutes onto your total completion time so is not recommended if you want to try to get your name on the scoreboard for fastest completion time.

The game takes a surreal twist early on and really milks the supernatural theme. Expect plenty of creepy touches like objects rustling and moving of their own accord, ghostly singing, ghostly faces appearing at windows, and plenty of thriller moments that reference back to movies like The Shining. Production values are excellent, from the subtle touches like dust particles suspended in the air or a curtain flapping in the wind to characters that are fully voiced and animated to the extent that they look real (well, as real as a ghost can look). The orchestral soundtrack is beautiful too, if a little overbearing at times.

Something I really flat-out didn’t like was the unpleasant comments that you get if you try to use an inventory item in the wrong place. Responses like "Have you thought of having your eyes checked?" "You are an intellectual colossus," and "Seriously? That’s your best idea?" were off-putting to say the least – especially since adventure games are all to a certain degree about experimentation and trying out creative solutions to problems.

The most annoying example of the game’s stellar commentary system at work was when I tried to fit a key in a keyhole, but it turned out to be the wrong key for that particularly keyhole (like I was supposed to know that). "What did you expect?" the game snarkily asked. "I expected the darn key to unlock the keyhole… obviously," I muttered to myself.

Minor gripes aside, Mystery Case Files: Return to Ravenhearst really is a spectacular achievement. It’s not the first game to blend hidden object and adventure gameplay, but it’s certainly one of the most polished and challenging. Hats off to Big Fish Games for somehow managing to make an already stellar franchise even better.