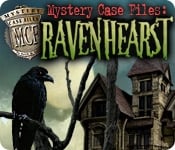 In MCF: Ravenhearst, you are asked to investigate the remote and mysterious Ravenhearst Manor, located in Blackpool, England, after acquiring the incomplete diary of a young woman who used to live there. Instead of solving crimes by investigating various suspects, as was the goal in previous games, your task this time is to find the missing pages of the diary in order to piece together what happened to the girl and unlock the secrets of Ravenhearst.

While the premise is different, the basic gameplay of MCF: Ravenhearst is the same as other MCF games. The various rooms in the manor (32 in total) are cluttered with hundreds of different objects, and each room has a list of clue objects to search for that are hidden somewhere in the clutter.

Once you’ve found enough clues, you’ll be able to use the Crime Computer to finish the level off by completing a mini-game where you have to piece together an old photograph to receive a missing diary page.

In a new twist, certain rooms in the manor are protected by elaborate locking mechanisms that serve as fiendish multi-part puzzles in their own right. These creative and sophisticated challenges are a welcome evolution from the more simplistic set of mini-games that were featured in past MCF games.

Each missing diary page fills in part of an ongoing narrative that helps to tie all the levels together. The humor that was a staple of the series until this point has been abandoned in favor of a darker mood that is enhanced by suitably ominous music and sound effects.

Having a story that unfolds literally piece by piece to anchor the gameplay is a great idea; unfortunately the plot is about as hackneyed as they come. My only major gripe with the game was that the diary entries that told the story could have been more vivid and fleshed out to give the player even more of a reward for finishing each level. (It also doesn’t help that by the time you’ve pieced together the photograph you can basically guess what the diary entry is going to be about anyway.)

Still, the game does manage to poke a bit of fun at itself with clever diary references to the "cluttered" manor filled with "an absolute horde of varied nonessentials" – attempts to logically explain, for the first time, why the player is required to search for such an odd assortment of objects.

MCF: Ravenhearst is challenging but manageable. Both modes on offer (Detective and Relaxed) have time limits for finding all the items, but Relaxed mode offers significantly extended time. You can use up to five hints per round that will not go as far as to reveal the item point blank, but rather will show a glowing circle around the area that the item is in to draw your attention there.

One of the great things about the MCF series – and Ravenhearst is no exception – is that you can play the game over and over again because each time you start a new game, you get a new set of clues to look for among the thousands of different items.

Given the rapid rise in popularity of the Mystery Case Files series and other related find-the-item games, it’s fair to be concerned that the series might burn itself out too quickly. MCF: Ravenhearst is proof, however, that the series is in no danger of stagnating just yet.

The game is enough of a departure to still seem fresh, but at the same time doesn’t stray so far off track as to disassociate itself from the things that made MCF games fun in the first place. And you don’t need to know anything about previous MCF games to be able to jump right in and start playing this one.