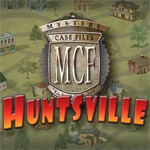 You know, TV always portrays Poroit and Jessica Fletcher doing the fun parts of detective work: interviewing suspects, putting people behind bars, etc. But you rarely see the grunt work, the TPS reports of being a gumshoe … staring at a room and looking for clues. Somehow, Mystery Case Files: Huntsville makes this unheralded bit of sleuthing enjoyable … if only for a while.

Think of MCF as Where’s Waldo or I, Spy for the adult set. Players comb over beautifully rendered pictures of rooms attempting to find hidden items (or clues) to help stop criminals who are plaguing the fine people of Huntsville.

The game is broken up into 15 cases, but the basic idea is the same for each: Proceed from place to place finding a certain number of items within a time limit, then solve a tile-swapping puzzle to identify the crook.

Although the game sounds simple, it’s quite satisfying. Credit for that goes to a near-flawless presentation. Every environment is so gorgeous and so intricate that you won’t mind staring at the static images for hours on end.

The game’s music is also inspired, with a slightly sinister tone that occasionally builds to a pulse pounding crescendo. The music is varied enough to remain interesting, yet unobtrusive enough so that you won’t shut it off when you’re trying to focus.

Solving crimes is serious business, but the game is presented with a charmingly goofy sense of humor. Likewise, the crimes are tame and a little bit silly, with nary a murder or assault in the bunch.

While this may frustrate Agatha Christie fans, it does make this a completely appropriate game for kids, good news for parents looking to share an activity with the little ones. In fact, this is a great game to play with others of any age; even my girlfriend and I spent a few a happy hours sleuthing together.

Unfortunately, a few happy hours is all there is.

Make no mistake, Huntsville has a very definite end, and after solving the final puzzle, there’s little reason to pick it up again. There’s not even a real scoring system, so giving a second go to beat the game quicker is pretty fruitless.

That’s a little easier to swallow though when you realize that this is a game meant to be played in small doses, as the simple gameplay can get tedious. Also, items to be found can sometimes repeat, so giving yourself a little break to forget where items are is a good idea.

Although the tile-switching puzzles help to break things up, MCF would benefit from a few more deviations. That would not only add length and variety, but help give strained eyeballs a rest.

The only other major issue I had was a few sloppy glitches. In one particularly frustrating instance, I wasted valuable time trying to find a “Ray Guy” (as it appeared in the list) when a “Ray Gun” is actually what I needed. Also, at least once I found the item I needed, but was unable to click it, bringing the game to a screeching halt.

Although Mystery Case Files: Huntsville is a satisfying, relaxing experience, I do wish it was longer. Perhaps further explorations of Huntsville will reveal some new puzzles, or a way to keep this game of hide-and-seek fresh.

Sprill – The Mystery of The Bermuda Triangle Review