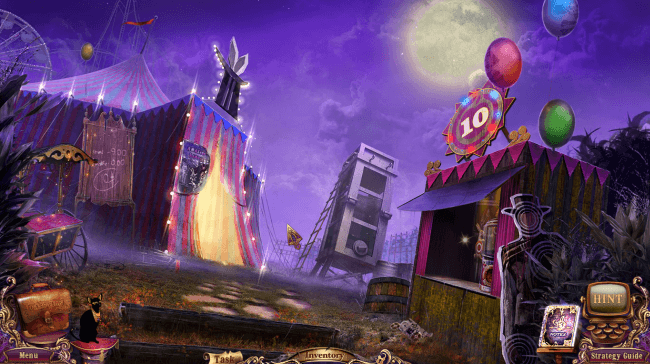 Step right up and try your luck!

Despite being the tenth game in the long-running and hugely successful HOG series, Mystery Case Files: Fate’s Carnival is actually a sequel of sorts to the fourth game in the franchise, 2007’s Mystery Case Files: Madame Fate, as it marks the player detective’s return to Madame Fate’s carnival and all of the mystery and wonder that is swirling around inside. But while the carnival setting itself might seem rehashed on paper, this time around everything in Madam Fate’s world just seems so much livelier, and Elephant Games packs on the content and inventive puzzles to match. I hope you picked up a carnival day pass and have your pockets lined with tickets, because you’re going to be enjoying your time at this spooky fair for quite a while!

Truth be told, I didn’t feel like there was much of a story to accompany the action of Fate’s Carnival at first. The player detective simply shows up at the titular carnival and references repeatedly through the dialogue that you had been there once before on a previous case. The majority of the game will simply involve your silent character moving through the carnival, and saving various carnies in distress: like the Amazing Larry, who’s somehow found himself irreplaceably sawn in half, or the Strong Man, who’s found his muscles being pushed to their limit in a hellish gauntlet of sorts. There’s also the occasional scare or two, which actually made me jump in both their sounds and execution. 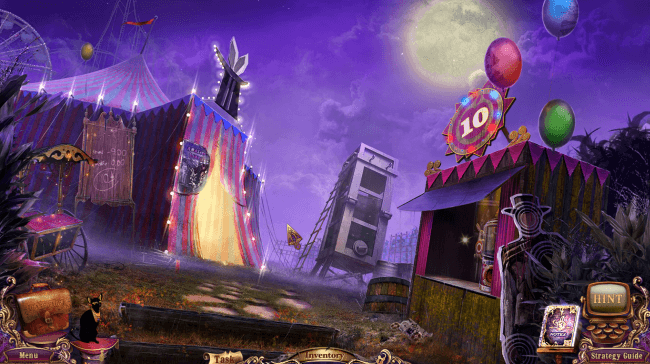 However, that’s certainly not to say the story never heats up as more mysteries and evil forces gradually get introduced, and that it doesn’t lay the foundation for all sorts of carnival magic and wonder to crop up along the way. You’ll also be given a spooky ghost cat by Madame Fate at the start of the game, who will help by reaching certain items that are well out of your reach, or scaring bats and attacking fish for your own personal gain: just like any good ghost cat would do. This adds a unique component to the exploration segments of the game, as you’ll often forget that the ghost cat is exactly what you need to solve a puzzle when you’ve exhausted all other options in your inventory.

By fully committing to this carnival theme from beginning to end, Fate’s Carnival is able to make extensive use of its surroundings at every turn, and you’ll never find yourself at a want for attractions to see or fun things to do (except maybe eating some delicious cotton candy in real life). Everything that you can possibly think of in relation to a carnival has found its way into this HOG in some capacity, and your interactions with each one are as devilishly fun and clever as if you were partaking in the lights and the sounds yourself. From enticing chance games and the Fortune Teller’s tent, to a Ferris wheel and roller coaster, this is the most expansive carnival setting that you’re likely to ever see in an HOG. 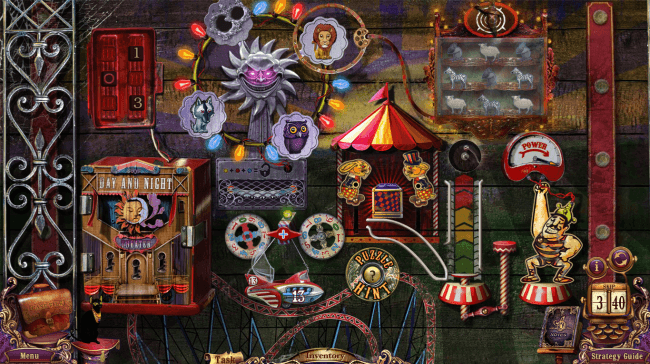 But what’s so great about Fate’s Carnival is that it fully utilizes each one of these inclusions to its greatest potential: nothing in this game has been put there strictly for show. The hidden object scenes are perfect in number, and appear at all the right times in your adventure, with wonderful interactive components and mini-games spread evenly throughout, like pushing different elemental buttons in the correct order to eject a roller coaster car’s driving seat. However, a few of the actual exploration puzzles do tend to get a little repetitive in both their actions and rewards. One section in particular early on in the game has you throwing a dart at a target to release a mystery item. Once you earn the trinket, two new targets pop up and send you off in search of two more darts. Once you knock those down, three more are already there waiting.

Easily the biggest strength of the game, though, is in Fate’s Carnival‘s regular use of interactive puzzle scenes, which combine different elements of hidden object exploration, single-screen puzzle solving, and even the hint of a wacky Rube Goldberg contraption. During each of these elaborate puzzles, you’ll need to interact with various things on the game screen to reach one final effect, by either opening new pathways, setting things up for a later reaction, or solving multiple mini-puzzles all expertly woven in between. My personal favorite instance of this came in the first half of the main story adventure, where a nautical-themed board tasked me with hunting two sharks by doing everything from fixing water pipes and fishing for anchors, to using said anchors to position harpoon guns, to coercing an octopus across the sandy ocean floor so I could snag the key that was trailing behind him. Not only are the puzzles in the game extremely imaginative and a joy to behold, but they also provide an excellent amount of challenge as well. 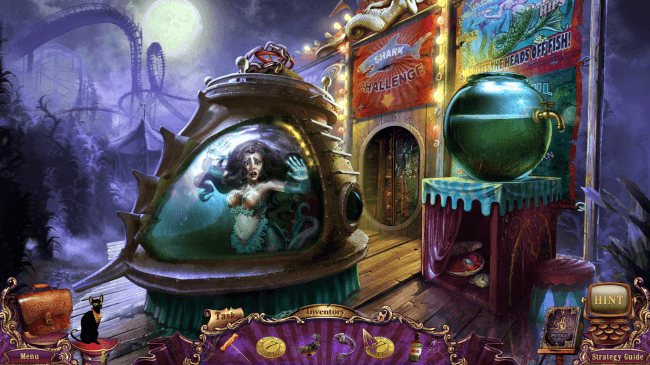 One of my favorite parts about Fate’s Carnival is just how many extra things there are to do in the game outside of the regular storyline, even for a hidden object adventure. For instance, you can find some well-hidden playing cards along your journey, which unlocks a fun variation of solitaire from within the bonus menu. You can keep your eyes peeled for special character bobble heads that morph into the actual scenery, and if you manage to pick up enough cash lying around the fair, then you can even purchase a number of fun decorative items to spruce up your very own carnival tent. And of course, this is all without even mentioning the generous bonus chapter that rounds out the total Collector’s Edition package, making it a tremendous amount of content to keep you playing well into the night, after everyone else has gone home and the rides are all closed.

So in the end, it almost goes without saying that Mystery Case Files: Fate’s Carnival proves to be another worthy addition to the acclaimed hidden object adventure series, and it captures the essence and charm of the carnival world to near perfection. Many gamers already feel the Mystery Case Files series has always exemplified hidden object gaming at the highest caliber, and Fate’s Carnival only drives that point home even further. With tons of content to explore, extremely inventive puzzle designs, and a setting that’s just as expansive as it is filled with things to do, you’ll be hearing that carnival song long after the carnies have packed up their tents and moved on to the next town.