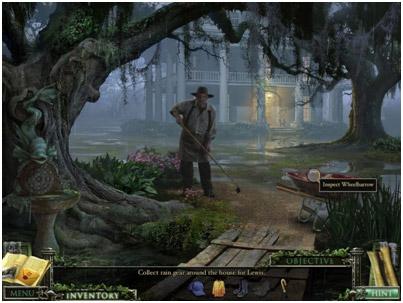 Mystery Case Files: 13th Skull is a must-have for any hidden object adventurer

Shenanigans! It’s what detectives get paid to put up with and you better believe that you’re going to see more than your fair share in Mystery Case Files: 13th Skull, the new hidden object adventure and latest addition to the famed series of games that drops you into some deep trouble in the deep South with ghosts, pirates, cursed treasure and one very odd housekeeper.

It’s not a glamorous life, being a detective, even a world-famous sleuth who handles the cases nobody else will touch. Sure, you may save a life now and then, maybe discover some long-lost booty or dispel an ancient curse, but the reality is that most of the time you’re fixing stopped-up toilets, delivering food to slack-jawed yokels and fetching cleaning supplies for people you don’t even know or, for that matter, find particularly pleasant. It’s kind of a drag, really, unless of course you like that sort of thing, in which case you’ve certainly signed up with the right agency.

Long story short: An Ohio family inherits an old, crumbling mansion located deep in the swamps of Louisiana. Shortly after they move in, the father, one Marcus Lawson, mysteriously disappears while reading a bedtime story to his daughter Magnolia. But this is a disappearance with a twist: Lawson, who reportedly spent much of his time searching for the treasure of the notorious brigand Phineas Crown, was snatched by ghosts! So his daughter says, anyway, and now his distraught wife wants a specialist on the case, someone accustomed to dealing with strange situations. So it is that you’re flown in from Great Britain to give the situation a look.

In most ways, 13th Skull is a relatively straight-up HOG adventure, albeit it a very good one, with excellent graphics and a top-notch soundtrack, and a strong emphasis on the adventure side of the coin. You’ll spend the bulk of your time talking to the colorful locals, running errands, solving some rather fiendish puzzles and occasionally taking random shots in the dark in hopes that whatever it is you’re doing is what actually needs to be done.

What sets it apart from the crowd is the extensive use of full-motion video, a technique that was also put to use in last year’s Mystery Case Files: Dire Grove. Every character in the game – about a dozen in all – is portrayed by a live actor superimposed over the game’s fanciful backgrounds. It’s a risky approach to take, since FMV in games has historically looked a little rough around the edges, but 13th Skull does an excellent job of blending live video and rendered backdrops in as seamless a fashion as possible. It’s an impressive technical achievement. 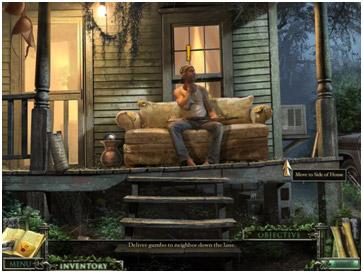 The downside to introducing human actors to video games is, well, the actors. It’s a tough gig, as the performers are forced to stand in place and must “act” with little more than their voices and facial expressions. To their credit, the cast pulls it off reasonably well; it’s hammy, but that’s to be expected, and nobody bombs badly. At the same time, it’s harder to take the inherently silly dialog of adventure games seriously when it’s being delivered by a real person. It’s rather like Harrison Ford famously said about some of the more awkward bits of dialog in Star Wars: You can write this stuff, but you sure can’t say it.

Speaking of things you can’t say, the options menu in 13th Skull features one very unusual setting that can be adjusted to taste: Attitude. You may recall that a certain reviewer was a bit put off by the “snarky” responses to incorrect player actions in Mystery Case Files: Return to Ravenhearst, which came at players with cracks like “You are an intellectual colossus” and “Seriously? That’s your best idea?” Believe it or not, the new MCF lets you adjust those responses to suit your mood with one of three settings: Normal, Southern or – you guessed it – Snarky.

Snarky, as promised, was suitably insulting, suggesting that I probably “graduated at the top of my class at clown school” when I made a wrong move. Southern was just awkward and cliched, hitting me with phrases like, “That seems tougher than a two-dollar steak.” After some experimentation I settled on the relatively bland Normal option. It’s bad enough that the game expects me to be a plumber and a short-order cook, I sure don’t need it making fun of me for not being very good at it.

And yes, you will fix toilets, and you will fetch cleaning supplies and you will cook food for people you’ve never met, just because someone asks you to. There’s usually not much to it beyond tracking down the required items and sticking them into the appropriate container, but don’t worry, because there are plenty of other, far more diabolical puzzles waiting to be solved. Most of them require a healthy dose of patience and keen observational skills; clues are everywhere, but sometimes they’re awfully easy to overlook.

Luckily for those of us who lack the patience (or brains) for such things, 13th Skull makes sure nobody gets left behind with a fast-recharging hint function that will point out hard-to-find objects and provide other valuable assistance and directions. For trickier problems, there’s also a built-in strategy guide that provides detailed, step-by-step instructions on how to get past just about every obstacle in the game. There is a payoff for working through the puzzles on your own, however, in the form of ten achievements for things like not skipping any puzzles or discovering all of the hidden Crown insignias. Unlike many games, earning these achievements will take some work, and you’ll only get two for doing the bare minimum necessary to finish the game.

Rather unexpectedly, 13th Skull despite its gruesome title is perfectly fine for kids and family gaming. There’s a certain creep factor to the proceedings, naturally, with snakes, graveyards and, yes, skulls all showing up here and there, but there’s no blood or gore to be seen and the only violence in the game took place more than 200 years earlier. There’s nothing worse in it than you’d hear in a campfire story about Edward Teach, enough for a bit of a fun fright without having to worry about warping a kid for life.

13th Skull does as good a job of incorporating live actors into its virtual world as any video game I’ve seen, but by making full-motion video such a central part of the experience it inevitably suffers from its inherent limitations. Some of the deliveries feel unnatural and stiff, while the dialog and accents tend to have a certain “high school drama club” quality about them. But it’s tough to be too critical, because the overall production qualities are absolutely top-notch and, just as important, it’s only a complaint at all because the game is striving to go beyond the conventional boundaries of the genre. And if its reach should sometimes exceed its grasp, I think that’s okay – and maybe even to be applauded.

The bottom line is simple: Mystery Case Files: 13th Skull is a keeper. It looks fantastic, it sounds fantastic, there’s a ton of things to see and do, plenty of colorful characters to meet and be annoyed by, an array of tough puzzles to solve balanced out by a very generous help system and, tying it all together, even a few hidden objects to look for. It’s a very worthy addition to the Mystery Case Files series and a must-have game for any hidden object adventurer.