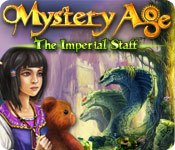 Normally, I frown at people who click through a game’s story as fast as possible. The story is there to give you a reason for solving the puzzles/finding the items/doing whatever it is you’re supposed to be doing as you play, so  paying at least some attention to it seems only fair. But the story of Mystery Age: The Imperial Staff will only reduce your enjoyment of the game, so click away as fast as you can.

The plot itself is perfectly sound: Eva and her daughter Amber are on a quest to find the source of the black rain that is plaguing the land and stop it if they can.  They meet several interesting characters along the way, and interact with them via chat bubbles, a fairly typical mechanic for a hidden object game. But Eva seems incapable of actually calling her daughter by her name, instead constantly referring to her as some sort of small animal. One "little fox" goes a long way, but instead we get an entire menagerie’s worth of "small" and "little" endearments. It’s cloyingly cliché and phony feeling.

The cut scenes between levels are equally offputting. Their animation feels clunky, and the complete lack of dialogue – either spoken or written – makes them feel extremely odd and out of place. They help connect the various locations of the game, explaining how Eva and Amber came to be at a certain spot, but you can figure out what’s going on without them.

If you skip the dialogue and cutscenes, what you’re left with is an absolutely stunning gameworld, filled with clever detail and lush colors. The game is a combination of item collection and basic puzzle solving. The hidden objects have been broken into pieces which you must find and reassemble in order to solve the puzzles. You may need to reassemble a candle, for example, to light the fuse of the dynamite that you located. Some items can only be found once those puzzles are solved, which adds a satisfying feeling of order to the object-finding chaos. Most levels in the game have several locations within them, and you’ll have to scour all of them to find the objects you need to proceed.

There are usually one or two minigames mixed in with a location’s puzzles, and although they’re skippable, for the most part they’re entertaining diversions. You might have to use clues to deduce the proper order liquor bottles should go on the shelf, or arrange chess pieces Sudoku-style.

Once you’ve solved a level’s puzzles, you’ll usually have to finish off by finding sets of 10 of the same kind of items – chocolate, mint leaves, balloon patches, whatever. It’s not as complex as finding pieces of objects, which is what makes it a refreshing between-level palate cleanser; you can just focus on spotting the items (which aren’t just identical copies of each other), instead of trying to figure out what does what. You have access to an inexhaustible number of hints, but if you use one, you’ll have to wait for the meter to refill before you can use another, and the meter is pretty darn slow. You can help speed it up by finding one of the several eyes hidden in each location.

The hints won’t help you figure out how to solve the puzzles, but the game provides nudges and clues that should point you in the right direction. Unfortunately, they’re a bit too easy to access. Mousing over a hot spot – a lock that needs a key, or a suspicious pile of dirt – calls up a thick black bar at the top of the screen with a hint as to what you need to do. Quite helpful, but there are so many spots in a given area that need solving that simply moving your cursor around tends to set off a flurry of black bars.

The clues are helpful and indeed necessary for some of the more obscure puzzles, but their constant appearance can be extremely distracting, and even cover up important parts of the scene. I would have much preferred having to click on a hotspot to bring up its particular clue; not only would it have been much less annoying, but it also would let me pick and choose when I received a shove in the right direction.

The actual game parts of Mystery Age: The Imperial Staff are solid, and the art is beyond lovely; the music is even pretty good. If you can either ignore or appreciate the story elements, you’ll certainly enjoy helping Eva and Amber on their quest.

The Mystery of the Mary Celeste Review