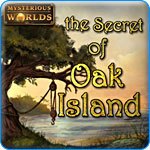 For more than 200 years, treasure hunters and mystery buffs have been fascinated by Oak Island, a tiny place off the south coast of Nova Scotia, Canada that’s rumored to be home to a cache of buried treasure. Many have tried and failed over the years to successfully excavate the island’s fabled "Money Pit," which has only fuelled the legend further. You’ll get to try your luck too in Cerebral Vortex Games’ new hidden object game, Mysterious Worlds: The Secret of Oak Island.

As the story begins, the main character (whose name we never learn) is at the house of his grandmother, who has just passed away. While going through her effects, he finds a journal containing grandma’s notes about the Oak Island treasure, and decides to follow up on the leads to see if he can get to the bottom of the mystery.

Gameplay involves investigating various locations on Oak Island itself and the nearby county of Lunenberg, such as museums, a memorial, an antique store, a beach, and a dig site, and looking for clues that come in the form of a list of objects to search for. In addition to a randomized list of objects to find, you’ll also be on the hunt for lore pages that reveal tidbits of Oak Island’s interesting history, and secret codes that must be deciphered in a separate mini-game.

The Secret of Oak Island seems a little unfriendly at first. Production values are nothing to write home about, trying to decipher the codes can be frustrating (until you begin to recognize patterns), and the hint system is bizarrely unintuitive – a compass point rotates more quickly the further you are away from the object, and slower the closer you get to it, eventually stopping altogether when you’re cursor is on top of the item. However, it’s definitely one of those games that grows on you the more you play and become acclimatized to its slightly quirky way of doing things.

Over the course of the game you’ll find five special devices to aid your search: a "mysterious device" that works like a scanner to uncover the locations of the secret codes, a magnifying glass that can come in handy when searching for smaller objects, night vision and x-ray scopes for revealing concealed objects, and scuba gear for venturing into the water. The last three devices were only used a handful of times, and it’s a shame that they weren’t more thoroughly integrated into the gameplay.

On the plus side, from a historian’s point of view, Mysterious Worlds: The Secret of Oak Island is well-researched. By accessing the lore pages you’ve found through a separate menu, you can read about the historically documented excavation attempts as well as learn about some of the legends and folklore surrounding the owners of the supposed treasure. The actual in-game text is kept to a minimum, meaning you won’t ever be bogged down by a lot of exposition, but can choose to learn more about Oak Island if you wish by reading the lore pages separately. (It’s a nice touch for those who complain that hidden object games can get too text-heavy.)

While you’ll find yourself eventually revisiting the same scenes over and over again towards the end of the game, The Secret of Oak Island offers decent replay value in that you’ll be given different items to find if you play through a second time. The game is timed, but there’s also a "Leisurely mode" that gives you significantly more time to complete each scene with no penalty for wrong clicks.

In short, Mysterious Worlds: The Secret of Oak Island earns praise for its interesting and unique theme, but is a little too rough around the edges to be granted top marks. At the very least, give the demo a try – and stick with it! While the game might not make the best first impression, it gets better the more you play.