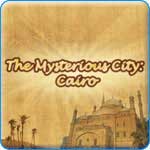 The Mysterious City: Cairo follows its predecessor The Mysterious City: Golden Prague with a new locale and story. Prague had the advantage of being an unusual place for a hidden object game setting. Egypt, however, is familiar territory for casual games, and you have to wonder why the sequel takes place there after the first game featured such a unique location.

The story is lacking in that there’s little to tell. Three artifacts disappear en route to museum in Alexandria, and you must track them down, beginning with the hotel where the delivery person stayed.  The story doesn’t have much of a mystery except for the names of the two main characters.

The Mysterious City: Cairo has everything you would expect to see in a hidden object game: multiple modes for finding objects including lists, silhouettes and comparing two scenes. The scenes hold many objects, which makes some harder to find, but not all. A few objects are hidden in the places you expect to find them such as a plane in the sky and a loudspeaker on the top of a building.

The list sneaks in odd items on occasion such as “link extinguisher.” This refers to a candle snuffer. It lists “artifact,” and many things on the scene look like potential artifacts. In replaying the game to confirm a few things, the artifact appears at the start of the story in a book. Players won’t notice or make note of the three artifacts, however, because they’re getting started and trying to figure out the story.

Silhouettes occasionally have unfair items such as squares and circles. Of course, many items are in the same shape and size. Comparing two scenes for differences can be tough with little variation coming in longer items, shorter items, missing parts and so on. This will challenge experienced hidden object players.

The mini-games contain variations of jigsaw puzzles. They involve either swapping two pieces or rotating pieces. The puzzles receive more and smaller-sized pieces as you advance in the game. The last one takes a long time to do with the many objects in a dark scene that makes it hard to identify where things go. Another great challenge for experienced players.

It’s easy to cheat in the rotating piece puzzle because the puzzles list how many correct and incorrect pieces remain. Watch the number on the correct pieces change as you rotate it to know when to stop. On the bright side, you won’t encounter memory or music games.

The biggest difference between Golden Prague and Cairo – other than location – is the addition of relaxed mode in Cairo… sort of. Relaxed mode still contains a timer with over 100 minutes. Regular mode gives you 45 minutes per day. At first glance, these look like plenty of time. However, each time you use a hint, you lose two minutes.

It also asks if you agree to lose two minutes every single time. After one or two times, stop asking and just take away the two minutes. For losing that much time, the hint “circle” could stand to be more noticeable as it’s easy to miss if you’re not looking near the area.

The clock doesn’t start until you begin a new day meaning the timer has to last for eight levels. You can play whatever levels are available in any order.

If you click dead center of an object that’s not narrow, it might ignore you. This happens too many times early in the game, but improves in later levels (or perhaps the player gets better at clicking the right spots).

The Mysterious City: Cairo displays stats at the end of a level listing the fast search, longest search, time spent (not including hint’s two minutes) and score. That brings up another point: the font. The list and most of the game’s content appears a cross between calligraphy and papyrus-style, which looks a bit amateurish.

The sharp photo graphics rectifies the poor font choice. You also earn nice-looking Egyptian-themed wallpaper every few levels you finish, which you can view in the Gallery and add to your computer’s desktop background.

Not much changes if you replay the game. The lists may not be identical, yet the objects and scene stay the same. Gameplay lasts somewhat on the short side for a hidden object game of this type with seven days and 56 levels in all.

Beginners should like The Mysterious City: Cairo since it covers all the hidden object game basics without feeling overwhelming. Frequent hidden object game players might find this one as a good filler between hit releases or on a slow day. Perhaps, if the game took place in Finland or some other locale rarely in games, it might’ve had more going for it.

Gamezebo tip: If you liked this game, try The Mysterious City: Golden Prague, Adventure Chronicles: The Search for Lost Treasure, and Curse of the Pharaoh: The Quest for Nefertiti.