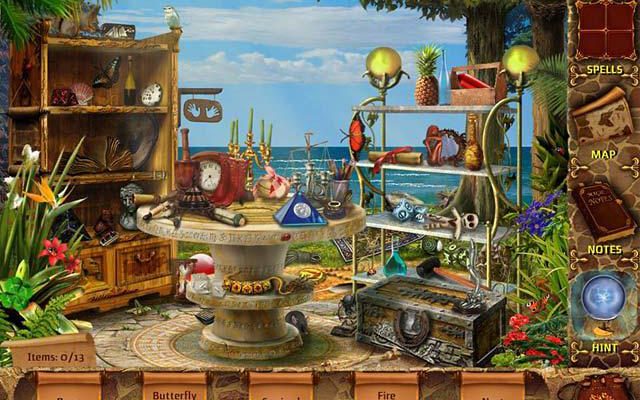 Hidden object games are a dime a dozen, so it’s no surprise that now and then you’ll run into one that “takes inspiration” from a popular movie or book in order to stand out from the crowd. After a recent, rather unpleasant run-in with vampires and angsty teenage girls I greeted the opportunity to attend a Great Magic School with a cringe. Was I now to be subjected to a half-baked, paper-thin “Harry Potter” rip-off as well? Fortunately, I was not; Mysteries of Magic Island isn’t great but it’s pretty good, and there’s no connection to Mr. Potter and the gang anywhere to be found.

Things get rolling right away after a short, pre-game introduction delivers the game’s very basic premise. As an applicant at the aforementioned Great Magic School, you’re sent away to Magic Island with a simple task: Prove your worth by getting back home. Many try but few succeed, which is unfortunate for those who fail because the options are either get off the island or die trying. On the other hand, we’re not signing up for swimming lessons here. This is the Great Magic School, so I suppose it’s only reasonable that they want to be sure of your potential before they let you in.

After a brief tutorial in which you collect your wizard’s hat (no robe, sorry) and a few other essentials, you’re sent to Magic Island through a one-way portal and the game begins for real. The first thing you’ll notice is that the island, despite the ominous undertone, is kind of a nice place. It’s a tropical locale with plenty of scenic vistas to take in, not to mention a rather upbeat soundtrack, all of which belies the inherent unpleasantness of “escape or die.” In fact, that threat notwithstanding, Mysteries of Magic Island is a bright, light-hearted game, and the implied gloominess of the plot is quickly forgotten. 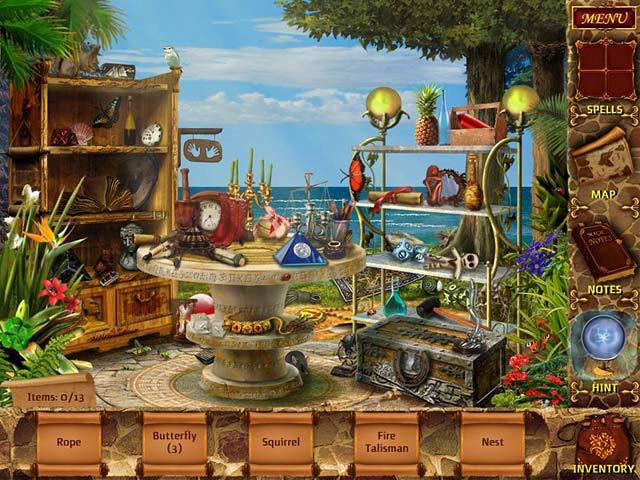 Game mechanics are very straightforward, with lots of hidden object searching broken up by occasional puzzles that run the gamut from fairly original to very well trodden. Visuals are colorful and attractive, if not exactly breathtaking, and the music, as mentioned, is generic but decent, especially in the latter half of the game, when it shifts to a slower, more moody ambiance.

Two skill levels are available, Normal or Advanced, and for this game I’d strongly recommend Normal mode. Like many hidden object games, Mysteries of Magic Island requires a fair bit of movement between areas to collect items, brew potions or learn spells, and while the “magic notebook” does a good job of detailing the tasks at hand, indicating where to go to actually accomplish those tasks is left up to the map – if, and only if, the game is in Normal mode. In Advanced mode, it displays only the location of the player, and while some gamers may enjoy running back and forth between scenes looking for the next step forward, those who don’t – like me – can avoid the hassle by simply avoiding Advanced.

The map offers a clear illustration of Magic Island’s locations, but what it doesn’t do is provide a way to travel directly between them. The game is laid out in an almost entirely linear fashion, which can make things a little aggravating because you’ll have to head back to the same spot near the start of the game several times as you play. On the other hand, Magic Island is a pretty small place and the layout is simple to follow, so although the running around is unavoidable, it’s not quite as pointlessly time-consuming as it initially seems. 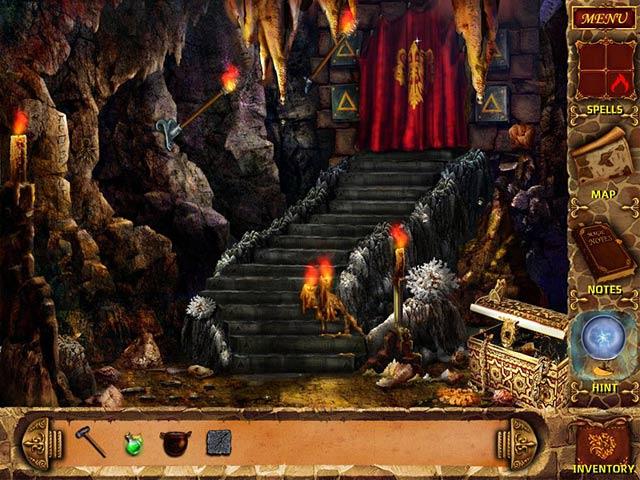 The presentation is marred by two or three spelling errors, which still leaves it far from the worst translational train wreck I’ve run into, but is otherwise very solid. The story, on the other hand, is beyond flimsy; the “magic school” angle may or may not be a little bit of Hogwarts bandwagon-hopping but the truth is that for all the difference it makes, your trip to the land of elemental magic could be fueled by just about any excuse. To put a more positive spin on it, Mysteries of Magic Island avoids becoming a cheap rip-off by simply dropping any semblance of worthwhile story whatsoever. This is the kind of plot design that’s done on the way to lunch – which is being eaten at the cafeteria down the hall.

But that’s not necessarily a complaint. There are times when an absent plot is better than an awful one, especially those that are just trying to cash in on whatever movie, book or television series happens to be hot that week. Unique, moving and memorable experiences are always preferable, but most of the time we have to settle for merely good; the solid, decent games that aren’t going to change our lives but do give us a few pleasurable hours of enjoyable, uncomplicated diversion. That’s exactly what Mysteries of Magic Island does. It won’t satisfy anyone looking for a J.K. Rowling-esque fix, but as an excuse to go object-hunting and puzzle-solving in an exotic, otherworldly locale, it’s not bad at all.