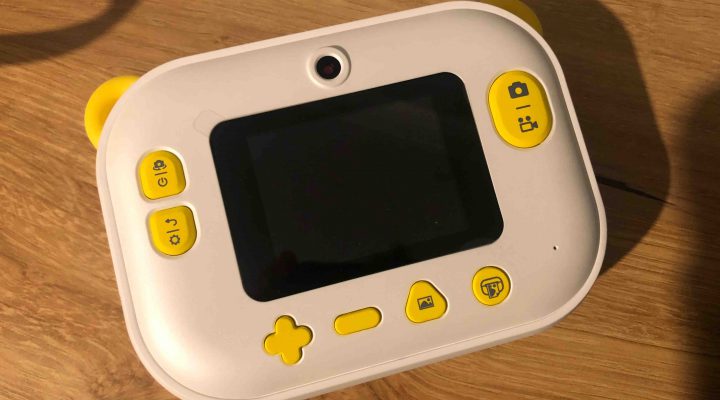 The myFirst Insta Wi feels, at times, like a more fleshed out version of the Game Boy Camera. You’ll either find that underwhelming or hugely charming – we largely fell into the latter category.

An instant print camera for smartphone toting kids, this is far from a high tech piece of kit – yet never looks to be, and is priced ($99 or £89) accordingly.

It’s a chunky camera, but not particularly heavy – and no element of it feels cheap. Some care has clearly gone into making sure it’s usable by kids with nary a sharp corner to be found.

All the ports are covered by squidy plastic and the buttons are all tactile without being too small. Some younger children might struggle to prize open the hatch to put in the printer paper, but perhaps that’s the point.

Our myFirst Insta Wi came with five rolls of paper, and here’s where the unit’s greatest strength comes into play.

It allows you to print off black and white pics within a few seconds, making it one of the fastest in the market. The quality isn’t terrible either, although if you’re expecting exact definition then go elsewhere – as instant cameras aren’t for you. This offers 12mp snaps after all, which is more than serviceable considering the standard of the printer.

Taking photos and printing them is incredibly easy too, especially when you use the accompanying app (available on iOS and Android). This app allows you to print photos you take with your smartphone too, which is a hugely useful feature – and again, very simple to use.

There’s a video option as well, although the footage it grabs isn’t the best – but is more than serviceable for kids making their first films.

With all that in mind the myFirst Insta Wi ticks all the boxes when it comes to an affordable instant camera for kids – especially for those who haven’t yet got a smartphone. The app allows the device to have appeal for slightly older users too.

If the myFirst Insta Wi sounds like something you’d invest in, then you’re in luck – there’s a Kickstarter set up for it right now here. If you pledge now you can get a unit for $69/£59.