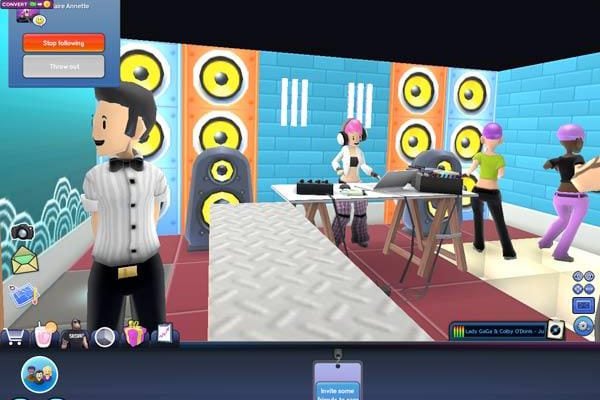 MyClub is a dance club sim that provides a whole new perspective on visiting your friends’ clubs.

My favorite experience while playing MyClub came not long after I clicked on one of my club’s visitors. In other, similar social games, this usually signifies a chance to do something like improve the visitor’s disposition (which is still possible here), but in MyClub I suddenly found myself looking through the eyes of the visitor as he downed a drink at the bar. Afterwards, he moved to the dance floor and later checked out my arcade table. Suddenly, all those hours of decorating my club seemed worthwhile and I could see why some choices worked and why others didn’t. It’s a small gimmick, but it highlights the tremendous potential of this new 3D club sim.

The magic behind all this is the Unity engine, which is gradually making its way into more and more social games on Facebook. Since Unity allows you to change the camera’s angle as you see fit, it also enables you to decorate all four walls of your club. As with games like Nightclub City, you can decorate your club to increase your popularity (or “trendiness,” as it’s known here), and you can clean up trash on the floor to gain experience (and the partygoers at MyClub are quite the messy bunch.) The decorations are a bit limited right now, but the selection does give you the chance to add some truly exceptional props, such as a waterwall and a full medieval theme with coordinating walls, bars, and doors. You earn most of your cash by selling drinks and hosting parties, which can last for a couple of hours or a couple of days. 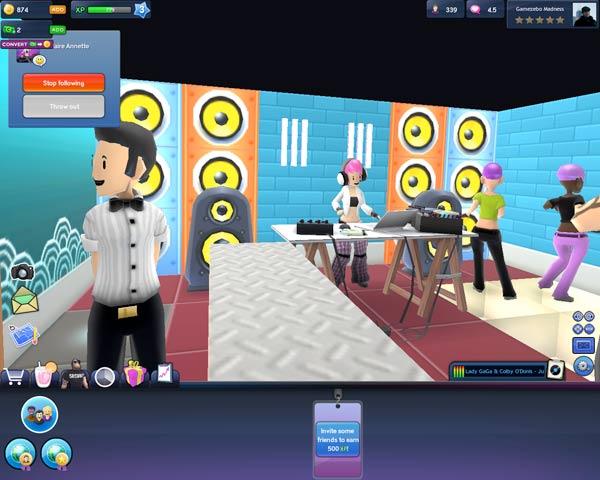 MyClub has more than a few similarities to Club Box, a social game we previewed a few months back, and it’s worth taking a moment to compare the two. While MyClub‘s 3D interface certainly gives it a visual advantage over Club Box, it suffers from the loss of the latter’s more exciting features such as drinking games and streaming music from YouTube. The drinking games were never complex affairs—you’d steer your way through a throng of partygoers or collect drink ingredients—but they did give you something to do during the events, which could stretch on for days. There’s nothing like that here, and the themed events just seem like extra eye candy as a result.

Club Box‘s greatest advantage over MyClub is its YouTube music model. Since making playlists required copying and pasting the URLs of YouTube music videos, you could listen to whole song as you visited other clubs and you could even watch the video if you scrolled down past the club interface. It was a great, although somewhat cumbersome, way to discover new music, and I encountered several artists that I continue to follow in the process of visiting random clubs throughout the world. MyClub uses iTunes previews instead, and it makes for a surprisingly annoying experience. Even though adding the music to your club’s playlist is a far simpler experience on MyClub, the 30-second clips make it sound like some jerk at the DJ’s table is rapidly switching between radio stations. If this model has a plus side, it’s that you can buy the tracks through a link to iTunes within the game’s interface, and the short clips potentially expose you to a much wider range of music.

Much like Club Box, MyClub gives you the option of visiting your own friends’ clubs or the most popular user-made clubs. This is the true joy of Proudfield and Triangle Factory’s newest creation, particularly seeing the more elaborate clubs through the eyes of the NPC visitors is an experience akin to the early wonders of Second Life. For extra experience, you can even clean up after the litterers at other venues. Elsewhere, a very handy statistics bar allows you to see how many people have visited your club, how many items you’ve sold, and how much you’ve earned. It’s a shame the meager gift selection isn’t more extensive, since it’d be an excellent way tosuggest improvements on your friends’ clubs. 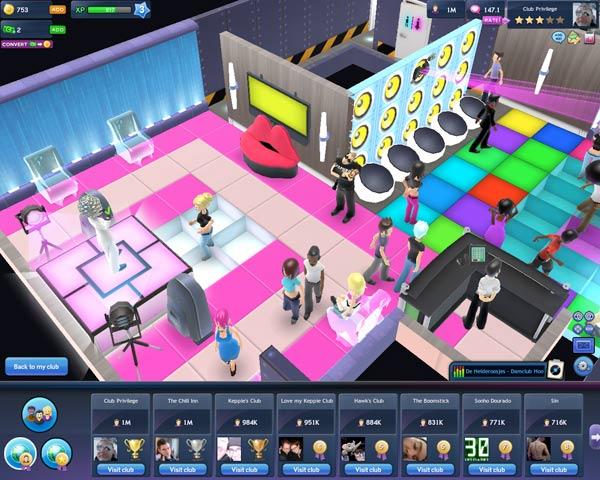 Overall, MyClub makes excellent use of the 3D Unity engine, and may keep a decently loyal following on that note alone. The interface is user-friendly, the clubs’ visitor models look fantastic, and the game seems bug free. Well, almost. When we checked the user feedback we discovered that another drawback of the iTunes interface is that MyClub only works properly in countries where iTunes is available, and we learned that several players mentioned that they couldn’t play even with Unity installed. We didn’t encounter the latter problem on three different computers, but it may be an issue to keep in mind.

As it stands, MyClub‘s greatest strength lies in its visuals. If the developers find a way to incorporate extras like the drinking games and full songs as we find in Club Box, then MyClub users may have more than enough reason to dance the months away in this promising party sim.