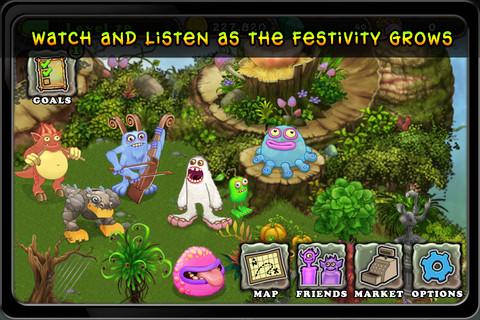 When you get right down to it, few social/building games really offer any kind of real motivation to play. You get paltry reasons like, “Build your own zoo full of cuddly animals so kids can gawk at them,” or, “Make some money, or else you’re a godless Communist.” My Singing Monsters might be the first social/building game that directs you to complete something final and substantial–namely, a monster chorus that swells into an otherworldly orchestra as you add one booming tenant after the next.

You begin My Singing Monsters on a silent island. Your job is to fix that silence immediately. You place your first few singing monsters with the help of the in-game tutorial, and then you’re left to assemble the rest of your band. Your first few monsters are purchased from the in-game store, but the fun really starts when you’re given a pass to combine and breed your own monsters.

The critters in My Singing Monsters are all pug-ugly in an adorable kind of way, and each one brings a unique voice or instrument to the Island’s ever-growing song. You can buy several islands in My Singing Monsters, and every habitat thrums with its own (maddeningly addictive) backbeat. Whenever you breed a monster and place it in its new home, it adapts to the rhythm immediately and begins to add its own touch by stomping, drumming, strumming, or singing. Regardless of how “complete” the song already sounds, a new occupant always contributes a new dimension to the act. You’re driven to keep breeding and adding monsters because you want to hear more.

When you’ve had enough of the music (beware: it’s a serious ear worm!), you can mute your monsters. Selectively muting the creatures also changes the tone of the song, so feel free to play around until you have a sound you dig.

While My Singing Monsters is a new take on the social/building genre, the game still offers you traditional ways to pass the time. Your monsters earn you coin as they sing (just imagine that each one has a tiny hat at its feet so that passing tourists can throw in money), and you can feed your monsters to level them up. Higher-level monsters earn more money. 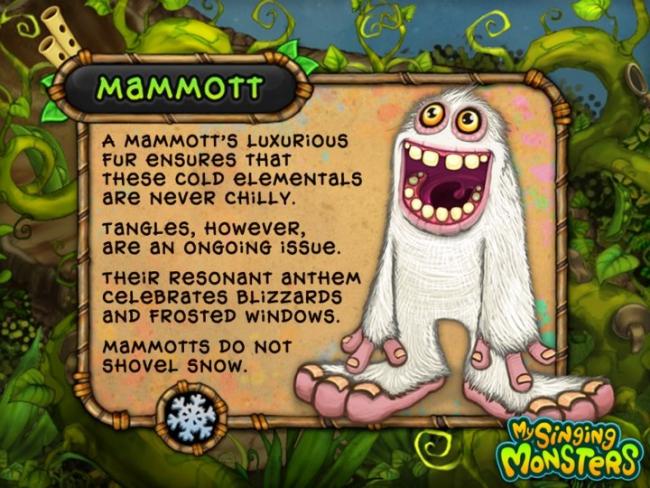 There are also tons of suitably weird-looking decorations to place around your islands. Each monster earns more money if it’s placed beside an object it likes, so make sure to check your monsters’ biographies to see which ones feel motivated in the presence of sentient bagpipe plants.

Ducking in and out of the in-game store brings up one of the more unfortunate problems with My Singing Monsters: stability issues. The game might occasionally crash on you after you perform a shopping spree, which can be frustrating. Breeding and hatching new monsters also comes with long wait times. Interestingly, since My Singing Monsters isn’t a traditional building game, you probably won’t feel much need to hang around in between hatching sessions to build decorations, pave your roads, or otherwise groom your island like you would in a game like DragonVale. My Singing Monsters is best enjoyed in small sessions.

That said, sometimes a three-minute pop tune can dethrone a ten-minute power ballad. My Singing Monsters‘ toe-tapping charm and gravelly songs are worthy of endless encores.