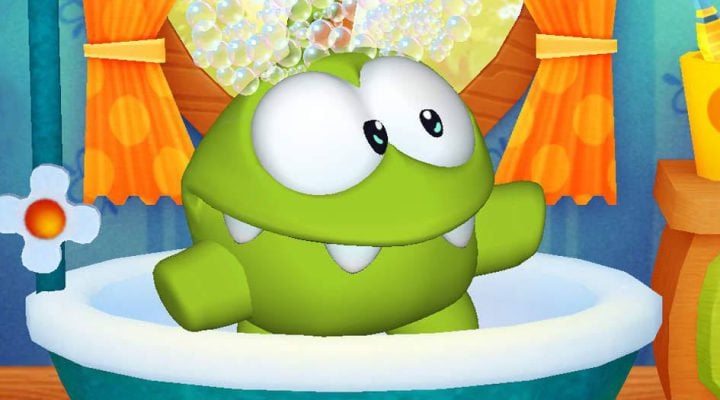 Own your own Om Nom!

Lots of toys and games to play with.

Om Nom is expressive and adorable.

My Om Nom from ZeptoLab is a digital pet app that lets you take care of your very own Om Nom – the little green monster from the popular Cut the Rope physics games.

My Om Nom is long overdue. There is no mobile gaming mascot cuter than Om Nom, with the possible exception of Swampy the Gator from Where’s My Water?. It’s great to be able to feed Ommy, play with him, and cuddle (even though a plastic screen separates us – oh, cruel life!). Om Nom’s appeal definitely adds to My Om Nom’s charm, though Om Nom’s constant need for sleep is as appealing as toffee on a cavity. 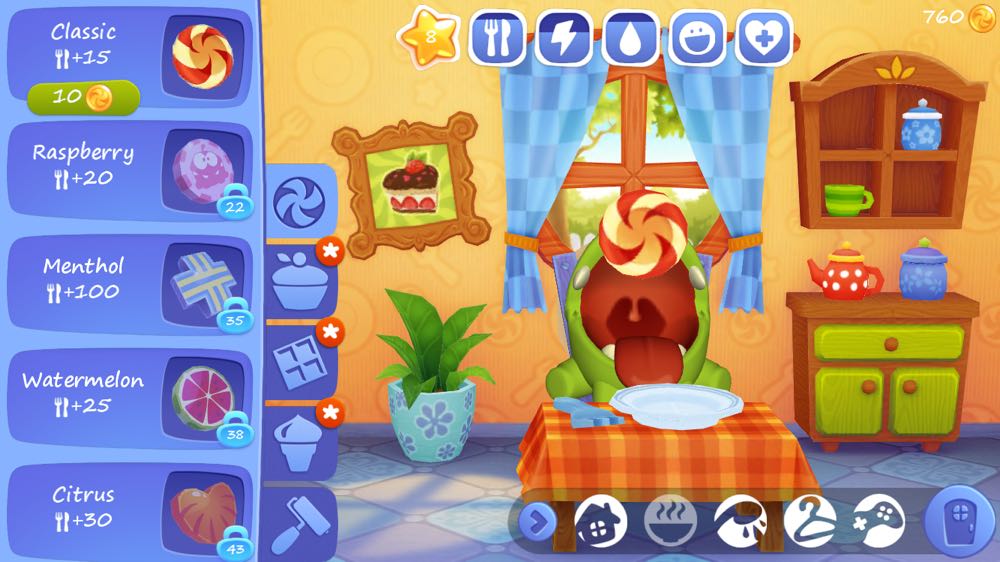 You’re put in charge of your very own Om Nom (male or female) once its scientist owner goes on vacation. Despite supposedly being out of town, said scientist still pops in with lots of advice and suggestions on how to have fun with your Om Nom.

To be fair, said scientist’s suggestions aren’t unwelcome, since they give you a good idea of what the app offers. You can play games with your Om Nom, including a simple match-three game, and a space-bound take on Jetpack Joyride. Loading these games and transitioning between scenery sometimes requires frequent and lengthy load times, though, so be prepared.

You can buy decorations for your Om Nom’s house and see how it interacts with seemingly mundane objects like dressers, chairs, and bookshelves. You can even pick up your Om Nom and fling it against the wall. It sounds cruel, but the plutonium-colored critter seems to love it.

Love is the key to raising a happy and healthy Om Nom. Several stats belonging to your Ommy are lined up at the top of the screen, and as long as you attend to its needs, the stats will stay high. Play with Om Nom to make it happy. Feed it to keep it full (needless to say, there is a fine selection of gourmet candy available for consumption). Bathe it to keep it clean. Scrub its teeth too, because some greedy little monster is going to need it after chowing down on all those sweets. 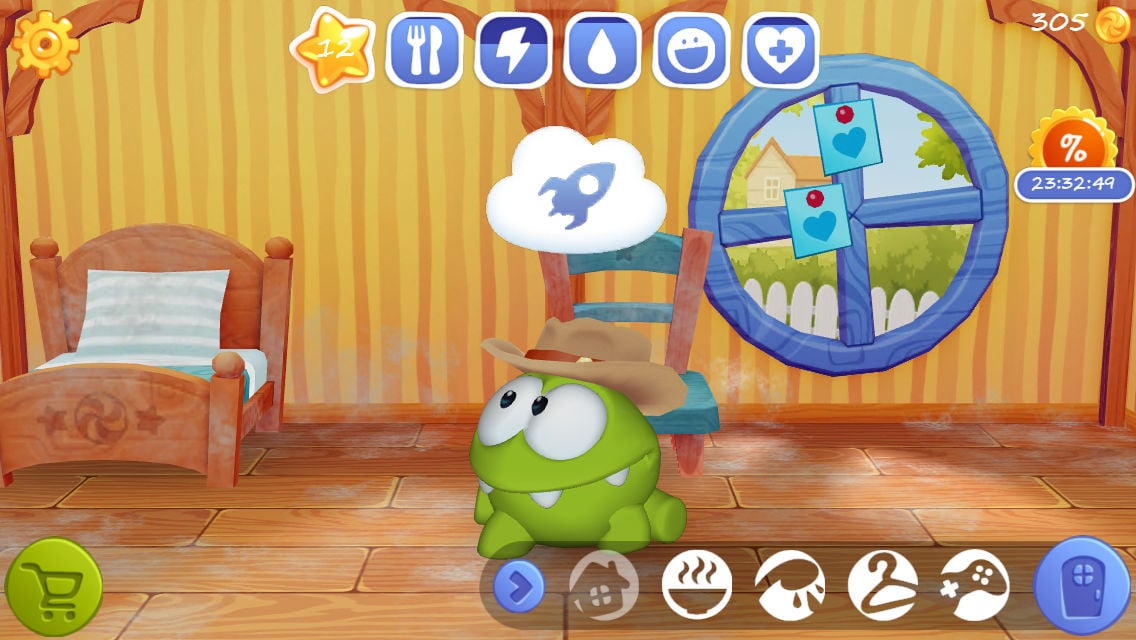 Interacting with Om Nom is fun enough, though there’s one stat that’s constantly working against you: Tiredness. Om Nom tires out very quickly, and he’ll refuse to do a lot of stuff until he has a nap. Going from zero energy to a full tank takes three hours.

Worse, Om Nom’s energy depletes even if you’re not playing with it. So it’s very possible to put the little guy to bed, live your own life, return to My Om Nom six hours later, and discover he’s totally knackered and needs to sleep again. 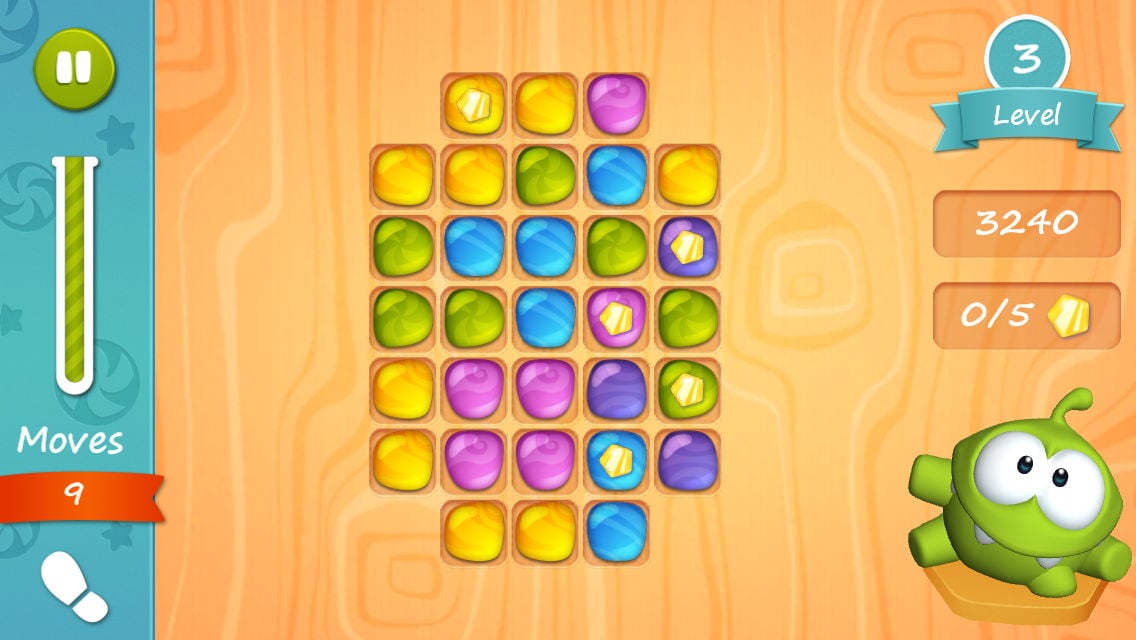 You can instantly replenish Om Nom’s energy by paying 400 coins, but coins take a while to earn through games and tasks. To ZeptoLab’s eternal credit, My Om Nom contains no in-app purchases. There’s no way for the player to pay their way forward, which makes Om Nom’s constant need for long naps a bizarre play mechanic. Maybe it’s supposed to be a subtle message about eating right? Hey kids! Eat more salads or else you won’t have the energy to play, either!

Younger players – My Om Nom’s target audience – might get impatient with the monster’s constant naps. However, there’s still plenty to see and do within the app – even when Om Nom is tired – so all the good things about owning an Om Nom definitely offset the bad things.