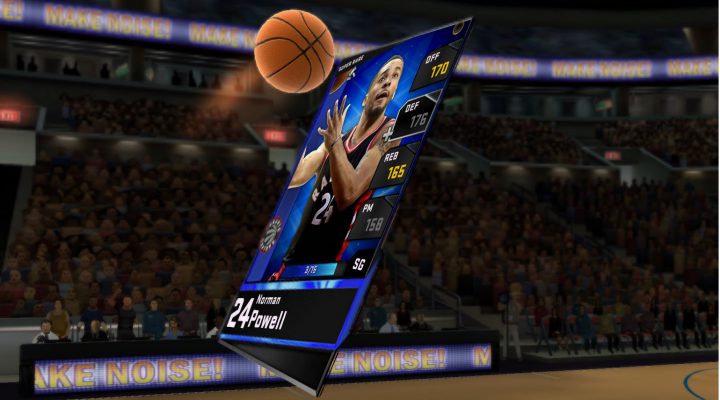 Gets hung up often searching for network connection.

Sometimes when you have a good thing going, all you want to do is not mess it up. That seems to be the thinking that 2K and Cat Daddy Games are using with My NBA 2K 17, a new basketball card game that looks and plays an awful lot like My NBA 2K16.

For those new to the series, My NBA 2K17 serves as a companion app to the NBA 2K17 console game, allowing players to scan their own faces in and earn virtual currency for that title’s “live the life of an NBA player” mode. More relevant to our purposes, it’s also a standalone card game that is technically called MyTEAM Mobile, except no one actually refers to it as such.

That game is virtually identical to other 2K card games like NHL SuperCard and WWE SuperCard. Your objective is to build the best possible team of NBA players (past and present) out of increasingly rare and correspondingly powerful cards. The most basic game mode, Quick Game, pits you against a roughly equivalent team owned by another real life player but controlled by the AI. 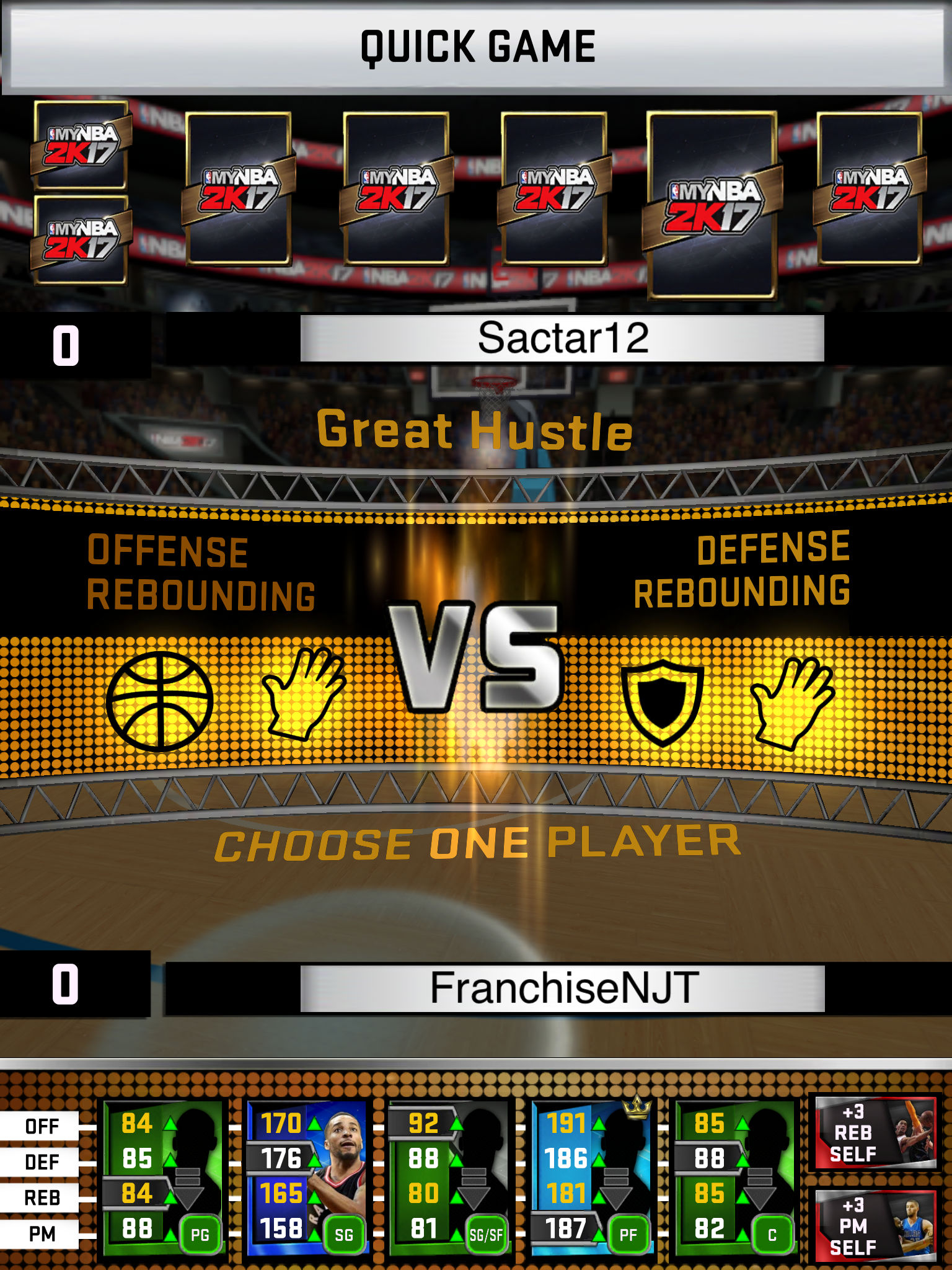 Each of the four quarters of a game consists of a one-on-one or 2v2 showdown that boils down to who has the higher number in one or two selected stats. It could be your Offense against the opposing player’s Defense, or your Playmaking straight up against his Playmaking. Bonuses for using players in the correct real world position come into play, as do boost cards that you can add to any match-up once per game.

Quick Games are over in just a minute or so, and while experienced players will tell you there is a hidden layer of strategy in selecting players to use in each match-up based on the likely composition of the other deck, there isn’t a whole lot more to it than it seems. It’s one of those cases where the grind is the gameplay, especially once the fun of seeing the cards actually play basketball against each other wears off.

Fortunately, there are several other modes, including a Season where you play out an entire 82-game schedule while managing your players’ stamina (with cards earned in Quick Game, so there is some synergy), and the Blacktop Challenge, a faster paced competition against a whole group of other players’ decks. The developers have been pretty good about adding events as the season goes on, so that should be the case this year as well. 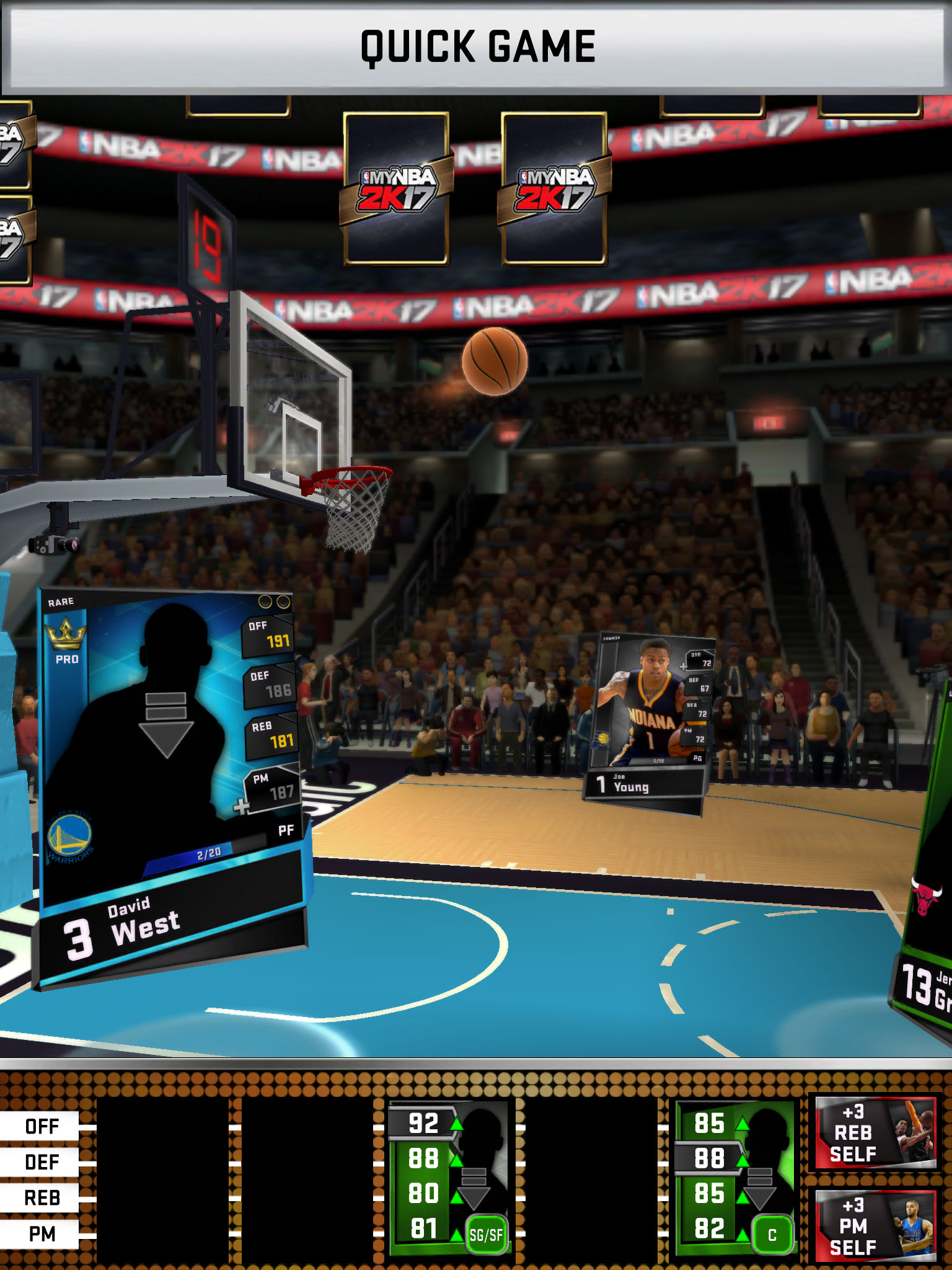 In-between games, you power up cards in typical card game fashion, by sacrificing unneeded cards to make the ones you’d like to play more powerful. The system for bumping up card to their ‘Pro’ versions has been made simpler, which is a nice tweak.

Other than that, this is largely the exact same game as My NBA 2K16, just with a fresh coat of paint, updated players (some of which don’t even have current pics if they changed teams in the real life off-season), and some simple improvements you’d have to search to find. This is one of those cases where keeping the same game but doing a big seasonal refresh may have made more sense, sort of like EA does with Madden NFL Mobile — or 2K and Cat Daddy already did themselves with WWE SuperCard.

One supposes when the year is baked into the title, that’s not as much of an option. Feel free to mentally bump this grade up by a half-star or so if you’ve never played the previous games in the series or get a lot of use out of the companion app feature, but on its own, My NBA 2K17 feels like a lot more of the same.