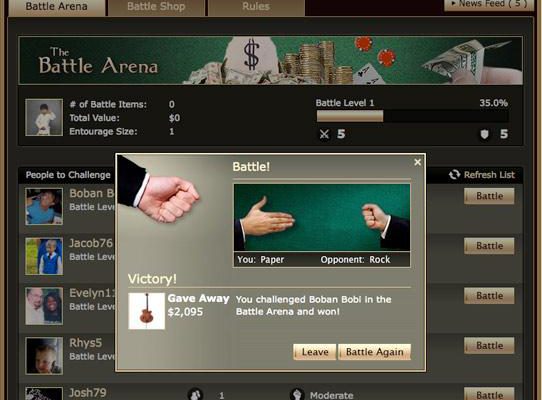 Directly or indirectly inspired by the 1985 comedy Brewster’s Millions, App Genius’ My Mad Millions requires you to spend every last penny of $300,000,000 as quickly as possible to qualify for an even larger inheritance. It’s actually not an easy task, and if you’re like me, you’ll come away from the game wondering just how so many celebrities manage to go bankrupt despite earning figures that make my graduate student loans look like chump change. Still, it’s an entertaining concept, and one that even yields a very slim chance of making some real-world money on the side.

There is, of course, a catch. In order to spend every last penny, you must consume or rent everything, and nothing can be owned. Also, there’s a limit on charities and gambling and you can’t destroy anything of value (e.g., “This means you do not take a pile of Picassos and have a bonfire”). This becomes intensely frustrating, particularly when you consider that a multimillion-dollar French Renaissance château “only” costs $704,927 a month to rent. 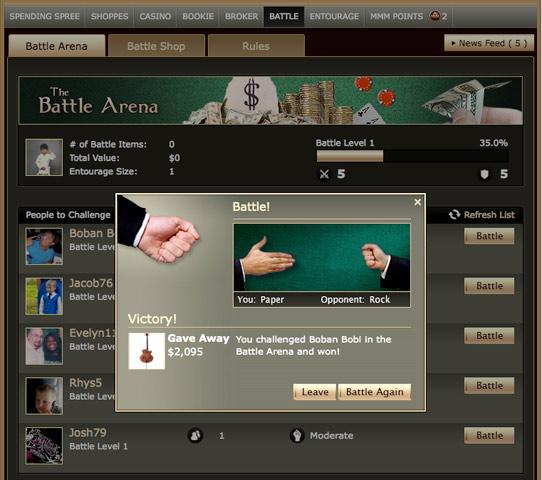 Luckily, the opening “Spending Spree” quests provide you with plenty of opportunities to splurge, eventually culminating in the fantastical losses of today’s stock market. By hiring agents, you can rent your dream home anywhere in the world thanks to Google Maps, and you’ll even pay lawyers $100,000 to write a customized resignation letter to your current job. (Be careful about posting this to your Wall.) Then you’ll hire an agent to prepare your house warming party, and he or she will cover everything from food to entertainment. Make your choices carefully, since the agents you hire and the locations and items you rent could make a significant impact on your losses.

You’ll get the first glimpse of the game’s social mechanics in the form of the invitations you’ll send out for your house-warming party. Put simply, the more friends you have in your “Entourage,” the more friends you’ll have to spend money on for similar quests, most notably in the “Daily Spree.” Here you’ll be able to buy all of your friends items like a day at the spa or a haircut, or you can even give them a job, and the amount of money spent on these choices is only limited by the number of your playing friends. Friends can also give daily boosts to stats such as energy or stamina, with purchase options requiring anywhere from three to forty friends.

Money can also be spent in a “battle” option, but don’t let the name lead you to believe that you can start hacking at your foe with a priceless Roman gladius that you bought from the British Museum. Instead, you’ll buy terrifying harbingers of doom such as Gucci Round Metal Sunglasses and Nissan Versas for use against random players. While you have to buy these (which adds to your net worth), you can make your opponent take them off your hands by losing at mini games such as a coin toss or Rock, Paper, Scissors. Sadly, there’s no strategy here, and outcomes are based solely on luck despite the promise of strategy in a category like “battle.” 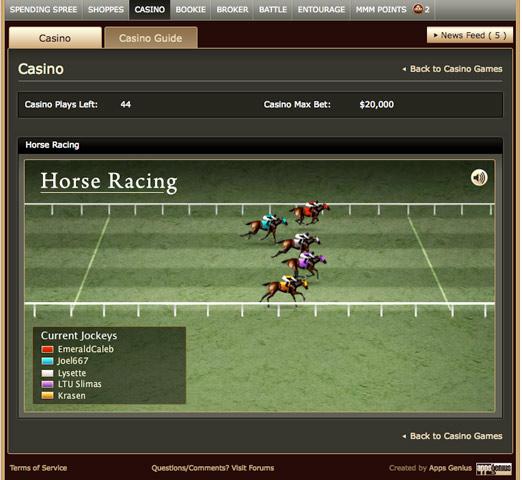 Elsewhere, you can gamble your money away (and just as easily win it) the normal way in games such as horse racing, Stud Poker, and Pick-A-Number. Unfortunately, these options are completely based on luck as well, and with a maximum bet of $20,000 for each game, it’s not impossible to end up worth far more than when you started. There’s also a limit of 15 gambles per day, although you can increase this amount in the stats section of your profile. You can also flat-out rent items from the Shoppes, including little items like a Boeing 747 and an 18-carat gold Monopoly set. This part is made all the more enjoyable since every item listed actually exists. 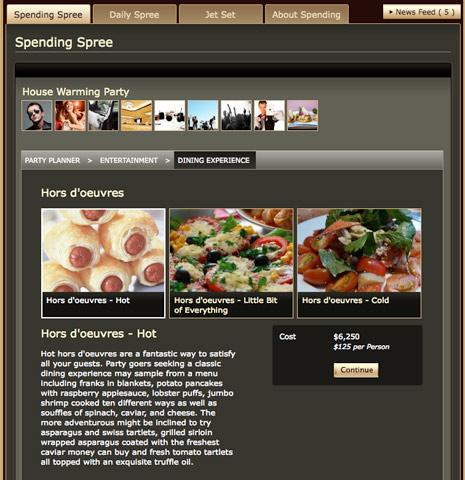 While all of this is entertaining enough, much of the attention given to My Mad Millions comes from its unique leaderboard policy, which states that the top 20 percent of their most active players will win 50 percent of that day’s receipts. Naturally, this most likely requires that you all but live on the game (in which case you’ll probably have to file that resignation letter with your boss for real), but it’s a tactic that will bring a steady stream of players to My Mad Millions for the time being. And if you’re wondering just how difficult it is to reach net worth of $0, consider this: A single person named “Carole” shows a net worth of $0 on the leaderboard at the time of writing, and second place is a big jump away at $512,385. 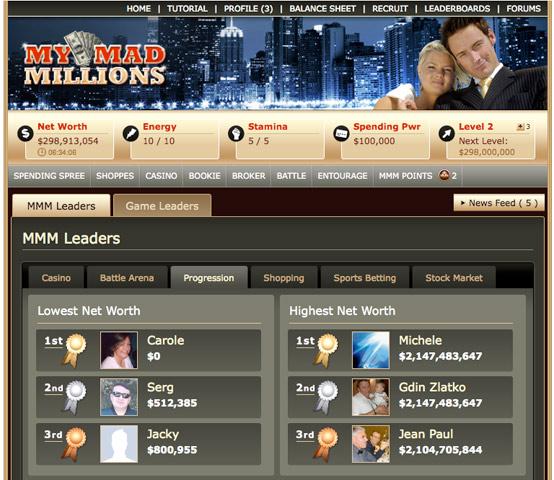 At times, My Mad Millions is maddeningly complex, and it’s worth wondering if this complexity and wealth of options will chase players away or attract them. Indeed, to properly list all the options, I would have needed to write a few more paragraphs. Also, as a small caveat,, the stock photo illustrations quickly get boring, and I admit that I once closed my browser after thinking that I was looking at a pop-up for some insurance or “solutions” site. At its best, then, My Mad Millions demonstrates that managing money can actually be fun, which may be a lesson that many of us here in the United States can use. At its worst, after disappointments ranging from interest earned and the lack of expensive things to do for your friends, My Mad Millions will make you want to buy an island in the Caribbean, stick a decent house on it, and say to heck with the rest of the fortune.

That doesn’t sound so bad, does it?