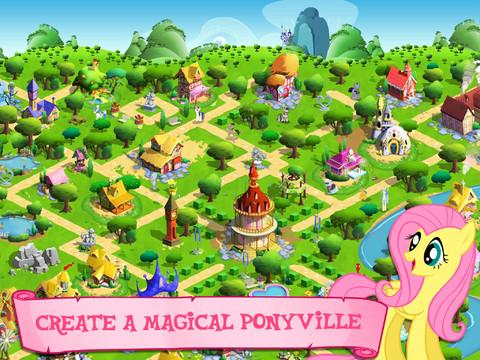 My Little Pony is tailored for young fans, but older MLP enthusiasts might find something to like, too.

If the Internet had a coat of arms, its supporting animals would be a rampant cat and a rearing, candy-colored pony. Despite the show’s, er, varied fanbase (it’s a huge hit with teen and adult males), the My Little Pony mobile game is seemingly engineered for younger players—though the high cost of in-game items indicates that Gameloft knew that older players with disposable income are going to dive into this game like Pinkie Pie into a triple-layer strawberry shortcake.

Even though the show is in its third season, the game’s story rewinds back to its very beginning. The dark pony princess named Nightmare Moon is threatening to plunge the land of Equestria into eternal darkness, and the unicorn named Twilight Sparkle needs to counter her evil magic with love, friendship… and a whole lot of building, tapping, and waiting.

My Little Pony is standard city-building social fare. You build up your new pony town with shops, stalls, and decorations. You also need to build each pony’s house, or else they won’t move into your aspiring utopia. Once you have some pony citizens, they can work several jobs to bring in “bits,” which serve as the in-game currency.

My Little Pony does shake things up a little by offering lots of minigames to pad out the endless construction. When a pony plays a game, he or she may level up and earn stars. Stars are necessary if the pony wants to take on more complicated jobs, but playing the games gets a bit monotonous because there isn’t much to them. You bounce a ball back and forth, you catch falling apples, you fly around hazardous objects, and that’s pretty much it.

What’s especially frustrating is that playing the games costs bits, and bits don’t come easy in My Little Pony. Your shops accumulate them rather slowly, and stuff in Equestria—especially new Ponies—is quite expensive. 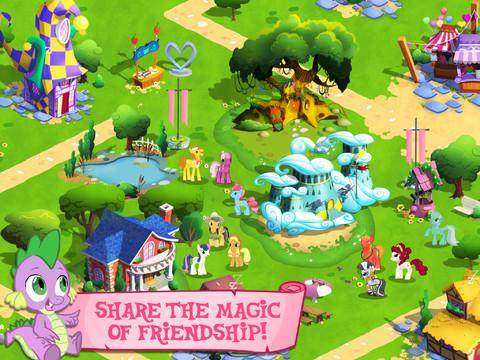 When you do manage to add a Pony to your stable, however, it’s a lot of fun because each character in the game is fully-voiced by the show’s actors. Twilight speaks to you in her calm, sensible tones, Spike offers sensible advice on how to play the game, and Pinkie Pie shrieks a lot about partying. No, she is really excited about parties.

My Little Pony doesn’t do much to distance itself from other social/building games, but it’s hard to fault the title for doing so: What says “Friendship is Magic” more than a social title? It’s a safe game, and it’ll eat up some of your time, but if you’re a huge fan of the show and you’re looking to build a thriving carbon copy of PonyVille, it’s going to take a lot of time and real-world cash. This shortcoming will undoubtedly discourage young players. But if you’re active in the MLP fandom and you have cash to burn, it’s probably worth the money and effort necessary to make a town that’s worth showing off. Friendship is Magic, but envy is a heck of a motivator, too.