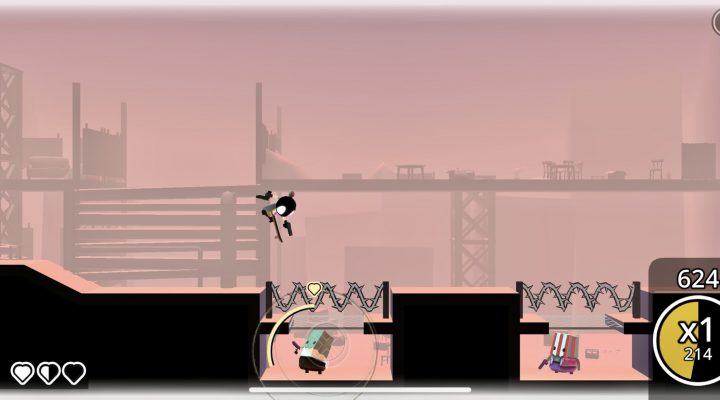 My Friend Pedro: Ripe for Revenge is a super slick mobile take on the smash hit console game. It uses swipey-draggy controls to set in motion a balletic blast of platforming violence and it’s really, really good.

You’re playing an assassin who’s helping a talking banana rescue his family. The banana may or may not exist. Every level lasts a couple of minutes and is all about killing in the most stylish ways possible.

The controls see you dragging back to aim your jump, then releasing to spring off. You can also slide along the floor. You shoot by tapping on your enemies. Things go into slow motion when you’re airborne, giving you a chance to slaughter multiple enemies.

The bad guys get circles around them when they can see you, and these act as a countdown. When the circle has disappeared, you’re going to get shot. You don’t want to get shot, it’s really bad.

There are other things that are trying to kill you as well – mainly spiky things. Hitting them loses some health. You get a multiplier for chaining together kills, and the more points you get at the end of the level, the higher your star rating.

When you nail a series of kills, leaping through glass, darting under crates, blasting away with skill and finesse, you can’t help but smile. The controls make things simple enough, but there’s still a decent level of challenge here if you want to get the best score. And since coolness gets you the best score, it’s super compulsive.

My Friend Pedro: Ripe for Revenge is a wonderfully ridiculous shooter that manages to turn bullet-time slaughter into a simple but effective artform. There’s so much fun to be had here that you’d really be pretty foolish if you didn’t pick it up and give it a go.