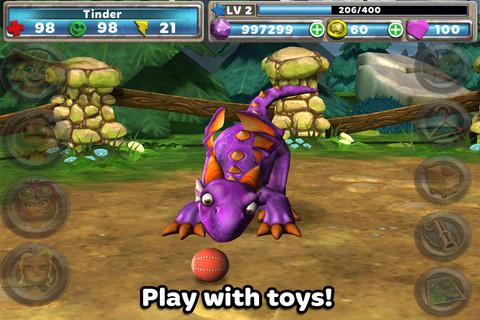 My Dragon is a new freemium app from Glu games that allows children to take care of their very own pet dragon and take it on quests and adventures in the Kingdom of Dragonia. Given the chance, who wouldn’t want to have their own pet dragon? My kids did, and between you and me, so did I.

There are a lot of things for you to do in My Dragon, and most of them are interlinked. You’ll start by graduating from petting and stroking, moving on next to teaching your dragon ever more complex tricks, which count towards levels. Reaching certain levels is a prerequisite for going on particular quests, but sometimes you’ll need some items of clothing or toys for your dragon, too. Completing quests earns scales which you can spend on new clothes and toys, and also items that help you earn dragon helpers like blacksmiths and stable hands, and they too earn scales. Some wardrobe items can only be bought with hearts, which are earned by spending time playing with friends’ dragons.

There’s one other essential resource: energy. You can always free play with your dragon, but that gets dull fast, and going on quests or learning tricks requires energy. You get an allowance every day, but once that runs out you have to buy your dragon food with coins. You do earn the odd coin from other areas of the game but mostly you get them by buying them with real money in the App Store, or by spending time completing tedious marketing-related tasks such as surveys or service sign-ups. And there’s the freemium catch.

Sadly, unlike some other freemium apps I’ve played, My Dragon is pretty stingy regarding what it will let you do before your energy runs out. If you eke it out to the full, you might get ten minutes of play with your day’s free energy, and that’s before the costs start rising with more complex tricks and quests. And, again unlike some other freemium apps, there doesn’t seem to be any way around this such as earning food with extended play time.

That’s a shame, because not only does it limit the free appeal of the game, but you’d have thought Glu would want people spending a lot of screen time with My Dragon, considering the way it flashes advertising at you. There’s a bar at the bottom of the screen showing adverts whenever you peruse the menus, and occasionally you’ll be interrupted by a full screen advert that you’ll have to click to close. Younger children especially won’t understand what this is all about and will probably come running to you to fix the iPad the first few times it happens.

The annoyance level of these pop-up ads is exacerbated by generally poor technical performance. My Dragon is a pretty good-looking app, with three different dragons to pick from, all nicely textured and animated with a fine blend of reptilian majesty and dog-like charm. But on my original iPad it takes about a minute to load and judders constantly, freezing whenever you try to access a menu and whenever it wants to load an advert. I don’t recall that being an issue with much more graphically intensive apps like Infinity Blade, so I’m content to put it down to poor programming. 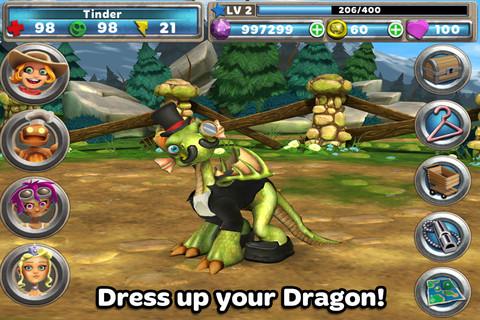 You can add poor game design to the list as well. Right from the start, where children are presented with a patchy and confusing tutorial that flashes new stuff in their faces faster than they can comprehend it, it’s clear little thought has gone into how the game elements go together. The overall medieval theme is clear enough, but why does Dragonia employ bizarre soft-toy like animals as stable hands and blacksmiths, whose only purpose in life is to give you scales and disappear? Why is the tutorial narrated by a wild-eyed cowgirl named Annie? Why is the palace chef a brass robot?

The lack of fun design extends to the quest system. Quests come in sets which — linked together — tell a simple and often unimaginative story. Each quest is divided into four sections, and you “complete” a section by pressing a button and waiting for a random item to be selected. That’s it. Your dragon will do some cute pantomiming in the background along with the story and that’s pretty clever, but there’s no actual game here. There’s just endless excuses to rack up the totals of various resources and spend energy.

My Dragon has a few entertaining elements, but it boils down to being a fairly cynical exercise in parting parents from their cash through the medium of pester power. It’s a shame, really. Freemium done right is a fantastic business model that benefits both consumer and business. But My Dragon isn’t freemium done right: it’s a money-earning engine with limited gameplay.