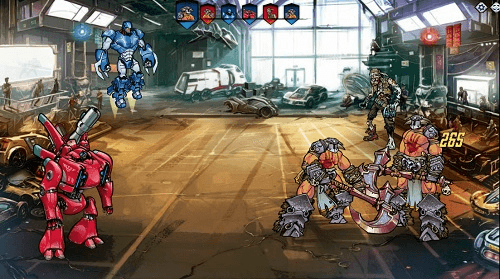 Mutants: Genetic Gladiators takes place in a future where science has advanced so thoroughly that we can clone and breed humanoid creatures right down to their armor, but where culture has declined so significantly that no one wonders if there isn’t something ethically wrong in letting lab experiments battle to the death. It’s Pokémon with an incubator – you create your fighters using processes that might as well have been ripped from the Dummy’s Guide to Genetics and use the remnants of the shattered world as your arena. Provided you can suffer through all of the associated waits, it’s actually rather fun for a while.

Still, it’s the kind of fun that finds its best expression not in the din of battle, but rather in the act of making the fighters themselves – and for a Facebook game, Mutants: Genetic Gladiators has some exceptionally good character art. It’s somewhat apparent in the dorky scientist – is that a snoring strip? – and stock photo-ready businesswoman who serve as the main characters, but it roars to life in the beasts you make. Some serious thought went into this, as the designs seem to follow a steady progression on the awesome scale.

Lightweight genetics push the whole process forward, allowing you to combine two mutants to make a new vicious monstrosity fit for the pits. The one you put in the first slot always has the dominant genes (although Genetic Gladiators doesn’t deign to tell you this until after the first creation), which means that if you toss in a robot first and then toss a warrior in the second slot, you’ll produce some square-jawed chap who looks like he could play cousin to both Iron Man and Mega Man. Throw another warrior in first with our Mega Iron Man, and you’ll produce my personal favorite mutant: a wing-helmed, greatsword-wielding menace called the Nordic Knightmare.

Pity, then, that Mutants: Genetic Gladiators usually bogs down during this otherwise enjoyable process. Hours drag by as you plod through the process of letting them mingle in the combination chamber, and then drag the product of their unholy union over to the incubator. And then, even though there are around 70 different mutants to discover, there’s no guarantee that you’re going to like what they produced during the mutant fling. Of course, that’s where the payment play kicks in – you’re expected to spend gobs of the premium currency to nudge the process along. 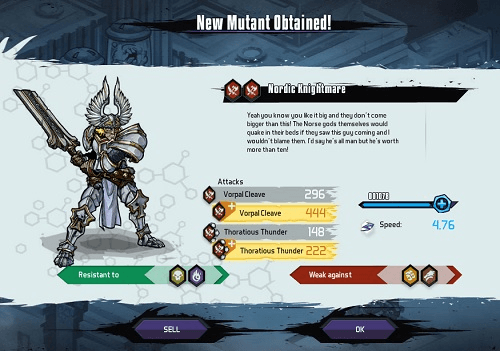 All of which begs the question: does the actual fighting make this waiting worth it? It’s certainly fun for the first few rounds, particularly when you’ve unlocked and enlisted a new mutant with satisfying combat animations, or when you bring a friend’s mutant into the fray with a devastating tag team attack that could help turn the tide in a rough match. Alas, even this winning formula wears thin in time. The limit of a mere two abilities for each mutant won’t satisfy variety-seeking thrill seekers, nor will the additional waits after each match springing from the absence of instant health regeneration – unless, of course, you pay to bypass the wait.

All of which goes to say that Mutants: Genetic Gladiators is an ideal game for sneaking in a few seconds of gameplay here and there, but it’s absolutely distressing if you attempt to play it in long sittings. Bad news for desk-bound Facebook users, perhaps, but such a design could work well if it makes the leap to mobile devices as planned. All that waiting would pass unnoticed as you finished other tasks while letting new mutants spawn and incubate, and you could sneak in matches in less than a minute throughout the day. That may still be far off, but if there’s any one lesson that Mutants players know, it’s that good things come to those who wait.