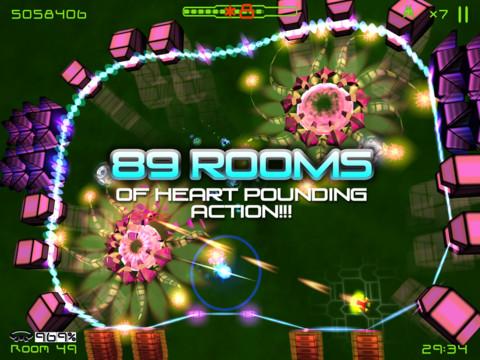 The mutants are storming your thumbs

I didn’t think it was possible to get blisters from an iPad. Smooth glass usually isn’t as hard on thumbs as a pair of analog sticks — or so I thought. Mutant Storm taught me there’s always a risk of dermal damage when playing an intense game, no matter what its interface happens to be.

Mutant Storm — despite the iPad’s lack of physical sticks — is a two stick shooter, a genre that calls Robotron: 2084 its daddy. Two stick shooters distinguish themselves through a gracefully simple control scheme. One stick directs movement, and the other stick shoots in whatever direction push it. The goal of these games is simple too. Shoot everything around you without getting shot.

Mutant Storm accommodates this lofty goal quite well. It has no shortage of things to shoot, the vast majority of which explode in colorful ways. Everything in the game — the stages, the enemies, your ship, your bullets — share a Tron-like luminescence. The visuals pair well with an ambient, thrumming soundtrack and pseudo-retro sound effects. Everything about Mutant Storm makes it feel like it’s meant to be played on a stand-up machine in some dim arcade circa 1986. The graphics are very much modern, but the overall feel is decidedly nostalgic.

As is the gameplay. Mutant Storm is no-frills arcade style fun. The other way to word this is bare-bones though, which is not as complimentary. The only thing there is to collect in this game is a high score. There is no upgrade system to muck around with. The four ships available to choose from (which all perform the same as far as I can tell) can be painted different colors, but that’s it as far as customization goes. And once you start playing you’ll find there are only a handful of power-ups, none of which are particularly inventive. There just isn’t very much here. I hate to judge a game by what could have been, but Mutant Storm could have been much more than it is.

The only reason this bothers me is because Mutant Storm’s core gameplay is rock solid. It is just plain fun. Each of the game’s 90 stages is a screen-sized arena that spawns waves of baddies. Some levels are circular, some triangular, etc, and each features its own unique arrangement of obstacles — walls, laser barriers, and boxes that grant bonus points if you finish the stage without blowing them up. The shape of each stage and the arrangement of these obstacles effects how you’ll handle the waves of enemies that spawn around them. Should you scoot behind a wall and take out that pesky turret before the robo-worms appear? Or should you hang back behind the laser barrier and shoot from afar?

What keeps this fairly repetitive cycle of battles fresh is its variety of enemies and their unique movement/attack patterns. Crystalline spheres explode into smaller iterations like the meteors do in Asteroids. Spider-like tanks shoot lasers that remain on screen for a short time, restricting your movement. Machines that look like rosebuds spew deadly triangles out of their backsides. When all three of these adversaries are on screen at once, things can get very hectic. Surviving these moments is the point of this game. It’s all about the exhilaration, the thrill of just barely slipping past a rock and a hard place. And I only beat it on easy. 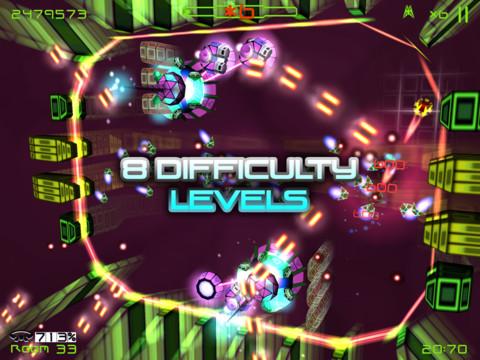 Anyone who likes arcade shooters should pick this game up. If you like a challenge, doubly so. My biggest qualm with the game is that, because the control surface is also the screen, I sometimes couldn’t see the action because my own thumbs got in the way. Besides this inherent flaw in the platform, the controls are top notch. You won’t have anyone to blame for dying but yourself. And dying you will do. This game is hard. Just remember… that’s an iPad in your hands, not a controller. Don’t throw it across the room!