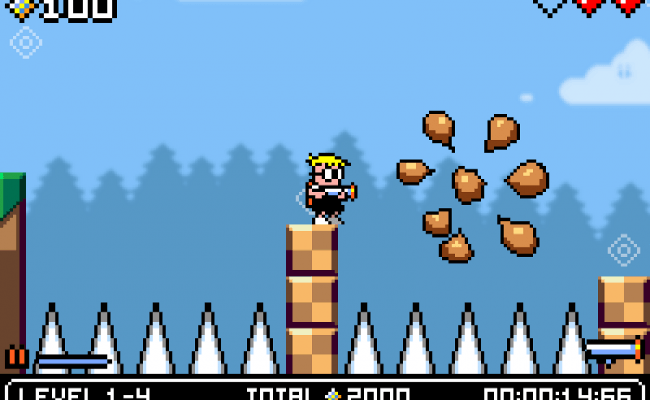 A real muddy situation, if ever there were one

There’s a pretty substantial disconnect between Mutant Mudds‘ vibrant appearance and its tough-as-nails gameplay. Or at least I didn’t expect a game whose protagonist is a water gun-totin’ kid named Max to be an unforgivingly difficult 2D platformer. My mistake, really. But it doesn’t change the fact that it’s a ton of fun. In fact, it’s that very difficulty that makes it so much fun. Challenge junkies, this one’s for you.

The story of Mutant Mudds is a simple one, though there’s little need for it to be complex. A meteor has hit the earth, and it brought some mud monsters along for the ride. It’s your job to take them out, but that takes a backseat to another, more difficult mission: staying alive. The fact that it takes three hits to die certainly helps, as does Max’s jetpack which lets him hover for brief periods. But you’re still going to meet your doom. A lot. 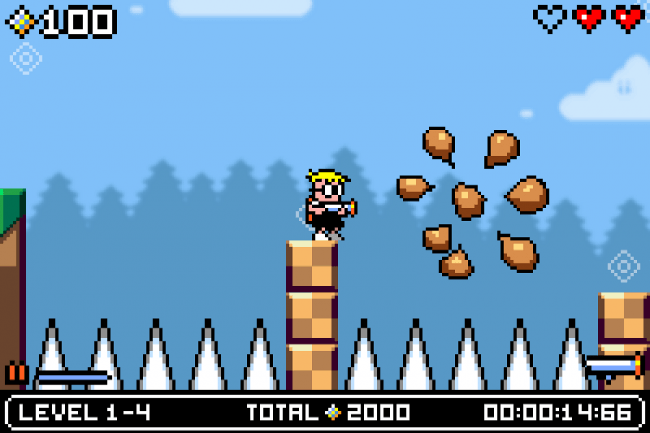 Mind, I’m certainly not trying to scare you away from Mutant Mudds. In fact, I’d go so far as to say it’s one of the best 2D platformers I’ve played this year. I just want you to see through the cutesy exterior the game so gallantly hides behind. In terms of difficulty, it’s comparable to the Mega Man games for NES. But in an act of mercy, developer Renegade Kid implemented a save system that’s a little more modern/forgiving. Your progress is saved after each completed level, and death only takes you to the start of whatever level you were playing. No game overs!

While Mutant Mudds‘ level design is partly defined by its difficulty, there’s a lot more to it than that. There are several springboards throughout the game which propel you to different planes in the foreground and background, a la Wario Land for Virtual Boy (you know, ’cause everyone’s played that game). It adds a layer of complexity to what otherwise may have been a pure left-to-right adventure, and while it’s likely that the creators implemented it due to the game first releasing on the 3DS, it translates perfectly to PC.

Fantastic though it is, it’s worth noting that Mutant Mudds probably won’t appeal to the easily frustrated. To be fair, though, it’s never cheap or despicable in its execution. When you die, it’s no one’s fault but yours. The controls are as excellent as you could ask for in a platformer, and the game is always very clear – even with the inclusion of alternate planes – about what needs to be done. It’s the actually doing it that’s the tough part. 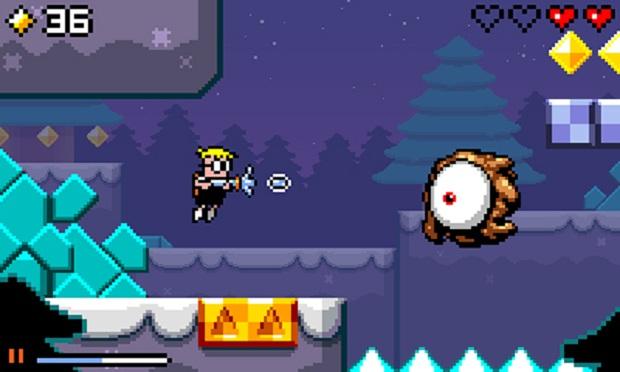 But if you stick with it and embrace the difficulty, you’re in for a real treat. From its perky aesthetic to its fantastic level design, the game oozes as much quality as the mud monsters do mud. Each of my million deaths brought with it a lesson of what I should or shouldn’t do in a specific area, and applying all my knowledge and skills to make it to the end of each level felt incredibly rewarding. I may have sworn at it a few times, but I did so out of love. Mutant Mudds and I are best friends to the end.