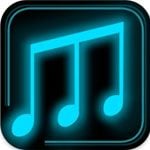 The object of Music Catch is very simple: use your finger to collect musical notes as they fall across the screen. No tutorial necessary. The yellow notes give you extra points. The red shapes are “penalties” or “bad” shapes (but I couldn’t see how my score was affected if I accidentally touched the red ones). The purple notes give you “power.” What kind of power? Well, when you touch a purple note, it attracts all of the other notes to your finger – sort of saves you trouble of dragging your finger across the screen from side to side, catching the notes. But that is the extent of the gameplay.

Now, let’s talk about the music. The soundtrack is stunningly beautiful instrumental piano that I could easily listen to for hours on end (if I was working around the house or relaxing with friends after dinner). The composer, Isaac Shepard, has a knack for creating melodies that are wistful, peaceful, and engaging at the same time. I really loved the music which comes from his “Deep Joy” and “Swept Away” albums. The problem is that there are only 4 musical pieces to “play” in the game. . . they are awesome to listen to but they do get tiresome after a several plays because there is no variance or break or increasing difficulty in the gameplay.

Which brings me to my assessment of this game. Music Catch feels like an activity to do while you’re listening to the peaceful music instead of a game with an awesome soundtrack. In other words, the music is much stronger than the game mechanic. I applaud the developer on coming up with something new and different and creative, but it somehow falls short of a game with any depth at all.

Don’t get me wrong. If you want to listen to peaceful music and ‘Zen out,’ then Music Catch is a great game for you. It’s very easy to master. So, there is no brain-strain whatsoever. In fact, it could easily be played by young children, so if you’re a mom looking to buy an iPhone game you can “pass back” to the little ones while you’re driving around town, Music Catch might fit the bill.

The graphics are straightforward and attractive, and the way the shapes fall across the screen is mesmerizing at first (but the lack of variance in gameplay breaks the trance quickly). As for points, well, I scored tens of thousands of points, but I wasn’t sure how I did that or how I would get a better score (except maybe avoid the red notes with more vigor). However, keeping score in this type of relaxing, mindless endeavor seemed a bit counter-intuitive to me. Everything about the mood and music of the game was telling me to ‘relax’ so I found myself not really caring if I scored a lot of points. The real ‘point’ is to relax and enjoy the music, after all.

So, in the end, I feel like Music Catch is less like a game and more like a relaxation exercise. Because this game is free for a limited time, how could I refuse the opportunity to try it? But I’d really rather just buy Isaac Shepard’s albums to hear more of the music. If it weren’t free would I buy Music Catch 2? I guess that would depend on my mood.