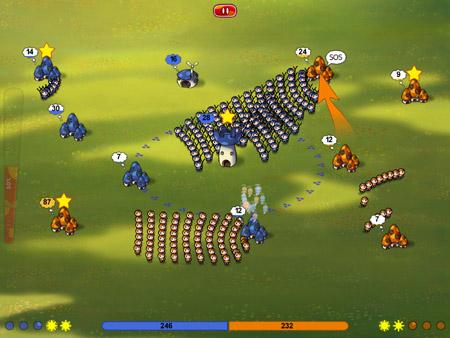 Putting the fun in fungus.

Not all console games can make a smooth transition to mobile, but Mushroom Wars isn’t just any game. IGN named it one of the top 25 PlayStation Network titles of all time, so it makes perfect sense that Creat Studios and i-Free Innovations would want to put its fungus-to-fungus RTS game on iPads to get it in front of a wider audience.

The story behind Mushroom Wars is told in silent movie style, but it’s simple enough to get the gist of it. Several different factions of mushrooms have to put their differences together to defend their land against an outside force. Eventually that force becomes really outside, as in extraterrestrial. Even though your troops might be outgunned, they will follow your orders to rush and attack enemy structures without question, and each stage either requires you to capture all enemy buildings or take certain ones with strategic importance.

Sending your soldiers across the battlefield is easier than ever, as this feels like a game that was always destined for touchscreens. Each of your buildings displays its current number of troops, and a simple touch and swipe draws an arrow from there to their destination. A slider on the left side of the screen allows you to choose to send 25, 50 or 75 percent of the available mushrooms in case you don’t want to leave your structure completely undefended – which is normally smart since the opponent is sending out attacks at the same time.

Like numerous other mobile RTS games, there’s no turning back once you order an attack. The results of each battle play out instantly, and you’ll either take over the structure or see the enemy stand firm after taking some casualties. You’ll learn quickly that combat is mostly a numbers game, though you can increase your chances of success by boosting your troops’ morale or conquering forges that make your soldiers a bit tougher. The system works well overall, though you’ll find yourself occasionally drawing an arrow to the wrong place when the action picks up, perhaps the one downside to the conversion to touchscreens.

Basic buildings can be upgraded to produce troops faster as the expense of some of the current occupants. That dynamic creates some nice risk/reward decisions that need to be made on the fly. Turrets don’t produce more troops and have to be reinforced against attacks, though they pay off with their boulder-hurling deterrent effects. It’s worth mentioning that even though the aliens get laser-packing UFOs to use as their turrets, they still become rock towers when you take them over. Mushrooms must not be too good at reverse engineering alien tech. 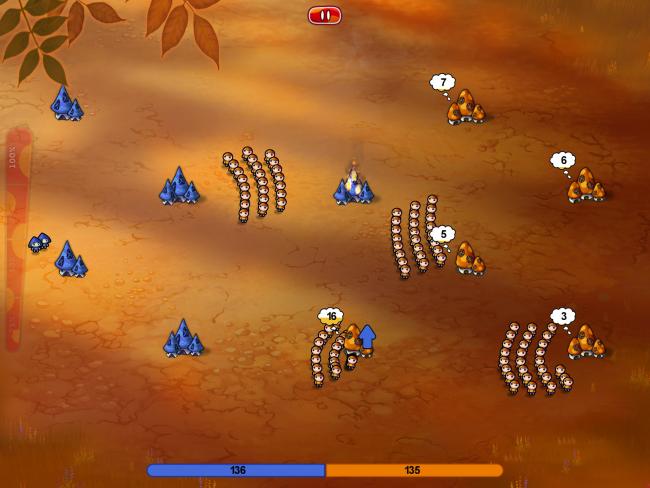 The game’s cute art style is probably going to appeal to some people while turning off others, but it seems appropriate within the context of the in-game world and story. Since combat is bloodless, I had no qualms about letting my six-year old give it a go, and the easiest of the three difficulty levels allowed her to make pretty good progress through the Campaign mode. She definitely enjoyed the cheers from the mushrooms after each victory, and the “SOS” bubbles that pop up when a weak force is about to be attacked helped her figure out where to send reinforcements.

New stages are unlocked as you progress, with an option for impatient types to pay extra to open up new levels a la carte or spend a bit more to get everything at once. That’s on top of what you pay to download the game initially, for what it’s worth. Facebook integration allows you to see how you compare with friends on featured maps that rotate on a regular basis, and there are the requisite badges and achievements too.

It’s a great package for people who have never played Mushroom Wars before, but fans of the console version might long for what’s missing. There’s no Multiplayer mode at launch, limiting your battles to the Campaign for the moment. It’s not a deal breaker, but it would certainly have been nice to have the option to take on other players from the start. You’ll also discover that there’s no love for iPhone users, as the developers felt the action would be too muddled on smaller screens.

As ports go, though, this is a very good one, and well worth the wait for iPad owners. It’s hard not to get sucked into Mushroom Wars once you start playing, and you’ll certainly never look at that portabella on your plate ever again without the urge to send it charging into battle.