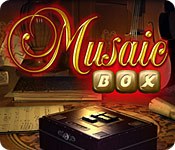 For hundreds of years, classical music has provided fans young and old the world over with a safe, uplifting source of pleasure and enjoyment. Now it gets its own game in Musaic Box, a mix of hidden object and logic-based puzzle-solving mindbenders. Albeit easy on the ears and a pleasure to look at though, the title’s not what we’d call especially fun or full or surprises. As such, it’s the sort of outing you might tinker with from time to time, but won’t feel any pressing reason to come back to save to enjoy the occasional toe-tapping ditty.

Short on storyline and slightly hamstrung by a shoddy translation job, the tale sees you cast as a faceless hero whose grandfather beckons them to visit with the promise of a gift. Upon arriving, you discover a mystical “musaic” box, and notes that direct you to seek out outlines of musical compositions and reconstruct them for play via the object. So, on the one hand, you must scour a series of rooms – attics, studies, basements, etc. – for pieces to tunes ranging from “In the Hall of the Mountain King” to “Yankee Doodle” and “We Wish You a Merry Christmas.” On the other, you must also slot puzzle pieces onto grid-based playfields in specific configurations that complete each folk song, waltz or carol as its composer (Handel, Haydn, Mozart… even Scott Joplin) intended.

Play begins as you use your cursor to click on various objects – violin cases, pictures, wooden vices, drawers, projectors and so forth – strewn about each location. Sometimes you’ll uncover hidden notes that partially finish a tune, others moving parts that automatically reassemble to fix broken machines or switches that turn on lights revealing hidden scribbles. While there’s no time pressure to discover these items, and hints are supplied if you take too long, it’s not a particularly compelling nor enjoyable activity as a result. Likewise, clues are often hidden in the most annoying or easily overlookable places, requiring you click in very specific spots, making the process frustrating on occasion.

Complete a piece such as Strauss’ “The Blue Danube” or Sarah Josepha Hale’s “Mary Had a Little Lamb” though, and it’s off to a dedicated puzzle mode you’ll go. Here, a series of varyingly-shaped blocks – think Tetris-like pieces, e.g. straight lines or “L”- and “+”-shaped  configurations – bearing colored icons which correspond to different instruments await proper placement. The goal being, naturally, to assemble each in neat rows which fill in all the empty spaces, but (a la sudoku) never let the same instrument appear in a given column twice. Players are always allowed to click on these pieces to hear the sequence of notes they represent, as played by attractively-animated clockwork figures. However, most of the code-cracking process simply comes down to trial and error, as you merely mix and match pieces within the confines of each grid to discover what works.

While some shapes perform just as well in multiple slots, adding challenge, later levels which offer increasingly larger, more complex grids do little to progress play forward over the course of the adventure. An automatic hint function, which reveals when shapes are correctly situated, does help alleviate aggravation, however, and saves you time. But by and large the only real compelling play element here is the title’s soundtrack itself, which only includes snippets of bigger compositions. Therefore, unless you’re a die-hard symphony patron, or determined to noodle out each conundrum’s solution purely for personal edification, it’s hard to justify the effort in the light of the eventual payout.

Maybe the promise of a “magical Atlantis amulet” is enough to keep you glued to the keyboard. Still, we can’t help but suspect that most will simply find the tale a brief, mildly amusing diversion quickly passed over in favor of brisker and more charismatic rivals. Huge classical fans ourselves, we’ll be the first to admit – this isn’t a bad game, per se. Stellar audio quality aside though, there’s little here to really recommend it, which leaves the action ending on a slightly sour note.