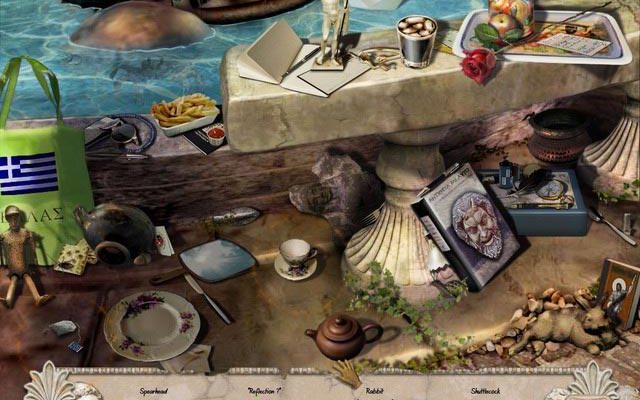 Get caught up in a mythological murder mystery.

In the new hidden object mystery, Murder Island: Secret of Tantalus, you’re swept away to a sun-soaked Greek island for your first high school reunion. Accepting an invitation from a well-to-do classmate, you arrive ready to reconnect with old friends but the reunion is cut short when your host turns up dead. Stalked by an unknown assassin, you and your friends search for a way off the island before you too become history.

In large part, the hidden object genre is dominated by games that follow romantic, historic or romantic/historic storylines so Murder Island: Secret of Tantalus is different from the get-go just because it’s set in the present day and only obliquely references the past. At game start, you and your good friend C.J. have just landed. Minutes after setting foot in the beachside village, you discover the body of an ex-classmate and realize something’s terribly wrong. The two of you then set out to find the rest of the invitees and more importantly, a way off the island. 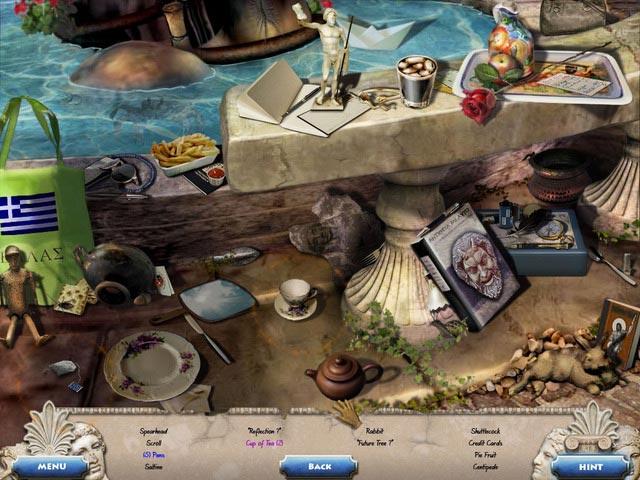 Murder Island: Secret of Tantalus plays much like other hidden object games, alternating between hidden object sequences (where you search for things on an itemized list) and adventure sequences where you explore the island hunting for clues, solving puzzles and talking to your former classmates. Unlike some hidden object games, where objects in a scene appear to be totally random, the ones here always make sense within the context. When searching through a beach scene you’ll find items like sunglasses, flip-flops and water bottles rather than perennial hidden object favorites like chili peppers and scissors. This helps the situation feel more believable and real. Along with collecting clues, you’ll also collect decorative tiles; every twelve you collect unlocks a blurb describing one aspect of Greek mythology. Not only are these blurbs interesting in their own right, as the mystery progresses, they also offer clues to the reasons behind various events.

The game offers an entertainingly modern, no-frills take on the hidden object adventure. For anyone sick of creepy old houses and Victorian ghost stories, it’s just the ticket with its real-life narrative and sunny setting. Using photos of real actors instead of hand-painted characters for the dialog sequences and using many photographic elements as environment art, it almost has the feel of a live action drama. Supporting this is the game’s voice cast, which from main character C.J. to the various bit players, is uniformly strong. 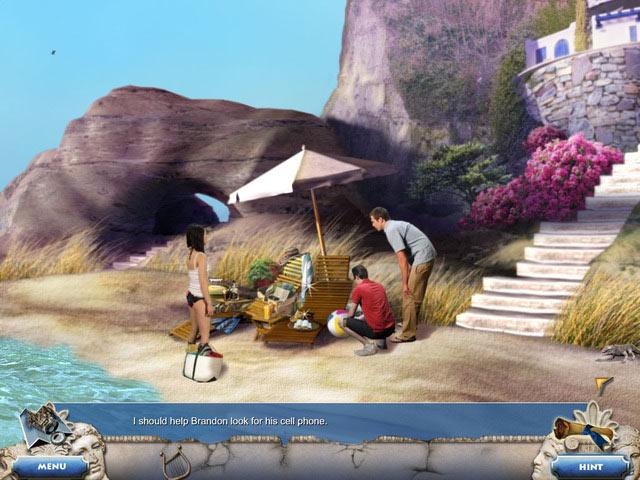 Aside from the game’s basis in contemporary reality, its other strengths are its interface and the way it communicates your objectives. A pause menu brings up a map of the island with every location marked. Places that have something for you to do are marked in yellow and with a special button, you can teleport from any point on the island to any other point. While this teleport button has a cool down that prevents you from teleporting over and over again, in the end it still saves you a lot of clicking. Important story beats are cleverly noted in the pause menu on the backs of island post cards and a compass on the upper left of the screen lets you track the tiles you’ve collected as well as the mythology you’ve unlocked.

There’s not much Murder Island: Secrets of Tantalus could do better although the story would have benefited from some live action cinematics instead of the still-frame, graphic novel sequences presently in place. It might have also helped if when collecting tiles, a counter told you the exact number you’d collected so you didn’t have to guess.

Despite the absence of cutscenes and post-game extras, the game is a solid entertainment value with around four hours of absorbing, fun gameplay unmarred by frustration or unlikely leaps of logic. With good puzzle design, a modern setting, well-communicated objectives and an interesting storyline complete with a creative surprise twist, Murder Island: Secrets of Tantalus is an island mystery that’s well worth solving.